Baltimore Ravens will extend Lamar Jackson, but must get MVP more weapons

The Baltimore Ravens won't have buyer's remorse when they eventually sign quarterback Lamar Jackson to an extension — as long as his supporting cast is strong. 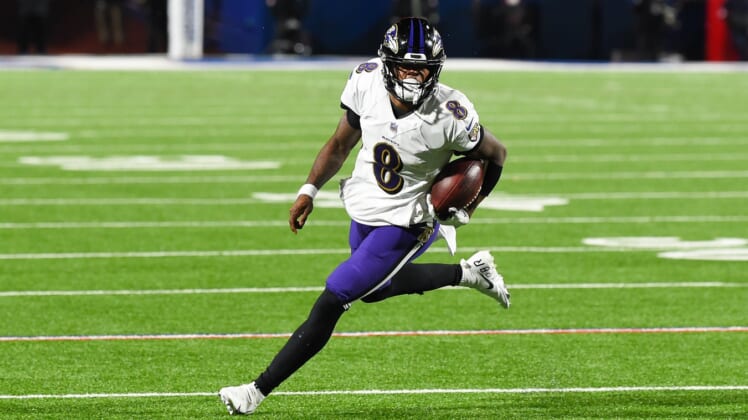 The Baltimore Ravens have been unwavering in their support of quarterback Lamar Jackson — as they should be, considering he won NFL MVP honors in only his second season as a pro.

But with that brilliant play comes the inevitable massive payday on Jackson’s second contract. Ravens head coach John Harbaugh said on Wednesday a long-term contract extension will ultimately be worked out for Jackson, but Baltimore must go the extra mile to make sure the 24-year-old is set up for perpetual success.

The ringing endorsement from Harbaugh came courtesy of NFL Network’s Ian Rapoport, who reported on the coach’s comments regarding Jackson’s place in the organization’s vision for the future:

In case it wasn’t clear Harbaugh is very much a champion of Jackson as the Ravens’ signal-caller for the next decade, he reiterated his support of the young star, per Aditi Kinkhabwala:

It’s fully possible to be critical of Baltimore’s offense and not Jackson, though, which anyone with a modicum of football knowledge should be considering what’s happened to date in the QB’s highly decorated career, dominated by winning and a one-of-one style of play.

This is why the Ravens must not only pay Jackson what he’s worth — either this offseason to get ahead of the curve or not long after — but also support him with superior offensive weaponry and improved schematics when he drops back to pass.

Baltimore offensive coordinator Greg Roman has indubitably done a fantastic job assembling a rushing attack that most opponents don’t have an answer for. Where his play design leaves much to be desired is in the passing game, where Jackson does have limitations, yet not to the point where he literally can’t throw as many ignorant critics would contend.

In 46 career games and 37 starts, Jackson has compiled over 7,000 yards through the air and thrown 68 touchdowns to only 18 interceptions. He’s 30-7 as a starter. Obviously, as the Ravens’ offense stands, they can compete for the playoffs ever year, but imagine if the scheme evolved as Jackson continues to develop — and didn’t pressure him to run for 1,000-plus yards each season, as he’s done in the past two.

Maybe the slow-burn progress has been the plan all along. Alas, you wouldn’t know it by how poorly Roman has drawn up passing plays. In the AFC Divisional Round loss to the Buffalo Bills, all the big chunk yardage Baltimore got through the air came when Jackson freelanced and escaped the pocket to find someone in a scramble drill.

No easy-read throws to be found in the game plan. Very few, if any, play-action passes to keep the Bills defense off-balance. Oh, and it doesn’t help that the only viable option in the Ravens’ receiving corps is Marquise Brown, who’s more of a pure deep threat than the consistently reliable No. 1 receiver Baltimore hoped it was drafting in the first round in 2019.

Why Roman didn’t capitalize on Brown’s breakout seven-catch, 109-yard effort versus Tennessee on Super Wild Card Weekend by featuring him more prominently early on against the Bills eludes logic. It may mean the Ravens wind up hiring a passing game coordinator to help him out. At least that’s the hope. Jackson threw for 200 or more yards just thrice in his last 13 regular-season starts, and has fallen short of that mark in three of four playoff games.

As for Brown, isn’t necessarily built to be the only option in a receiving corps, which means it’s on the front office to seriously address that position this offseason and in the years to come.

Since Baltimore made a decent playoff run and Jackson notched his first postseason victory, the team isn’t picking until No. 27 overall in the 2021 NFL Draft. It’s obvious the priority should be on getting a premium pass-catcher. Whether that takes trading up or it means waiting until free agency, the Ravens don’t have a more pressing need.

Who should Baltimore target? Among the standouts are a couple notable prospects who should still be on the board when Baltimore goes on the clock, along with a pair of free agents who’d help expedite Jackson’s progress as an NFL passer.

Florida receiver Kadarius Toney and LSU wideout Terrace Marshall Jr. both have merit to be the 27th pick in the 2021 NFL Draft, and could go even sooner. Toney enjoyed a breakout year with the Gators in which he had 10 touchdown grabs and 70 catches for 984 yards.

Marshall’s production (731 yards receiving, 48 receptions and 10 TDs in seven games) was perhaps even more impressive considering the lack of weapons from LSU’s depleted passing attack from the previous national championship team. That said, both he and Toney can align in the slot or on the outside, and are the type of playmakers Roman and Co. can count on to make explosive plays in space.

When it comes to the free agent market, nothing less than a Pro Bowler will do. Detroit Lions veteran Kenny Golladay and Tampa Bay Buccaneers star Chris Godwin are ideal targets, because Golladay may be without his familiar quarterback in Matthew Stafford. Plus, does Golladay really want to re-sign with a Lions team that’s in the midst of a rebuild? Maybe he’d rather go to a more reputable, winning culture in a place like Baltimore.

Meanwhile, for Godwin, there just may not be enough footballs to go around in Tampa Bay, as Tom Brady already has so many weapons at his disposal. The Bucs will probably upgrade their roster at other positions, leaving Godwin as an odd man out. If he were to join Jackson in Baltimore, though, he’d be the Ravens’ unquestionable No. 1 option with a big contract in tow, which would also get him out of the shadow of Mike Evans.

The Ravens should spare no expense in paying Jackson, yet general manager Eric DeCosta and Co. must leave enough space to flank Jackson with weapons to ensure he reaches his maximum potential.

With almost $30 million in cap room for 2021, Baltimore can be more aggressive than most as it pursues Jackson’s extension and elevating the skill around him to hopefully make a legitimate Super Bowl push.