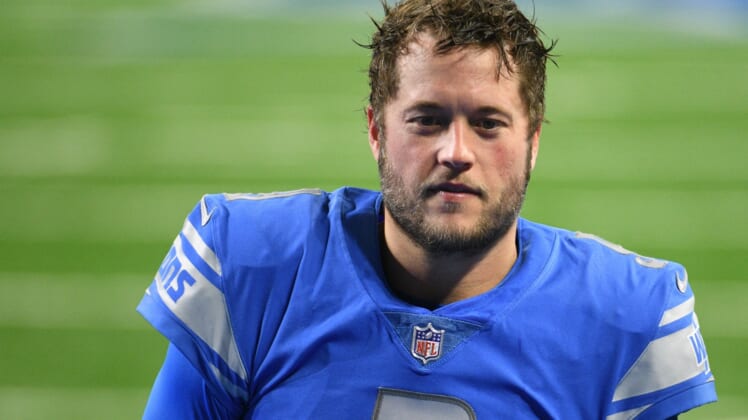 New Detroit Lions general manager Brad Holmes spent some of his press conference touching on a potential Matthew Stafford trade after rumors persisted that the longtime quarterback could move on this offseason.

The hiring of Holmes comes after Detroit cleaned house by firing head coach Matt Patricia and general manager Bob Quinn during yet another down season for the organization. It also comes amid rumors that a Matthew Stafford trade could be in the cards.

In talking to the media in his introductory press conference on Tuesday, Holmes pretty much left that issues up in the air. It will certainly lead to speculation of a divorce between the best quarterback in franchise history and the organization.

“Matthew, great player,” Holmes said, via Justin Rose of WXYZ in Detroit. “You appreciate how intangibles show on film, but it is my job to evaluate the entire roster. I have not had any discussions with Matthew or any player.”

That could be foretelling as it relates to Stafford’s future with the Lions. Previously reports suggested that they would look to move off the former No. 1 pick. Meanwhile, the 32-year-old Stafford likely won’t want to take part in a long-term rebuild with the Lions.

The interesting dynamic here is that Stafford’s wife made news ahead of the 2020 season amid trade rumors by calling out the Detroit Lions organization publicly.

It’s not yet known whether the rift between the former Pro Bowler and his organization had to do with Detroit’s previous head coach and front office combination or the team’s current ownership group.

Will a Matthew Stafford trade happen this offseason?

It really depends heavily on here Holmes and new Lions head coach Dan Campbell stand as it relates to the rebuild process in Detroit.

A former assistant head coach with the New Orleans Saints, Campbell worked with Drew Brees over the past five seasons. He knows a thing or two about good quarterback play.

As for Holmes, he was the area scout for the Rams when they selected Sam Bradford No. 1 overall in the 2010 NFL Draft. The new Detroit general manager was also one of those primarily responsible for Los Angeles trading up for Jared Goff at the top of the 2016 NFL Draft as the organization’s director of college scouting during that time.

Bradford bombed out with the Rams after a less-than-stellar tenure. Meanwhile, Goff seems to be on the outs with head coach Sean McVay. Those two experiences could potentially make Holmes think twice about a Matthew Stafford trade while exhausting the No. 7 pick on a quarterback or trading up in the 2021 NFL Draft.

There’s been some speculation that Detroit might move up the board for either Zach Wilson (BYU) or Justin Fields (Ohio State) as a way to find Stafford’s heir-apparent. Again, Holmes’ previous experience with selecting quarterbacks high and not having them pan out could play a role here.

For now, everything is speculation. It’s all about reading between the lines. What we do know is that the Lions’ general manager refused to commit to Matthew Stafford on Tuesday. In and of itself, that’s newsworthy.