OK, Detroit Lions. You're rebuilding. A new coach and GM are on the way. Let your longtime franchise quarterback Matthew Stafford spread his wings. 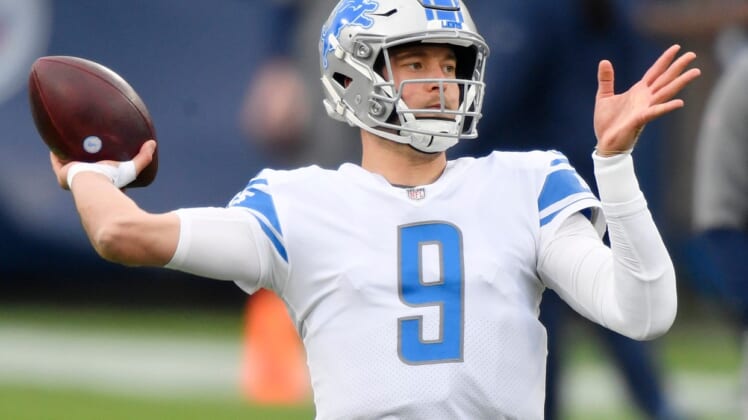 This is a cry for help from a non-fan of the Detroit Lions: enough is enough. It’s time to let quarterback Matthew Stafford go to another team.

It’s really a move that benefits both parties in the best way. Everyone involved has tried to make it work through multiple regimes and across parts of three decades. Stafford has given his all and then some to the organization. Please, Lions. Reward him with the chance to finish his career somewhere else.

Detroit Lions have failed Matthew Stafford and must let him loose

Ever since selecting Stafford No. 1 overall in the 2009 NFL Draft, the Lions haven’t done enough to help him, and thus don’t deserve to keep him.

Not that such things really factor into a front office’s decision-making process. Nevertheless, it’s the dignified way of looking at this situation.

Stafford is the off-brand Patrick Mahomes. And that’s not at all an insult to the player. It’s in reference to the second-class organization the Lions have been running for years on end. The group that made legendary wide receiver Calvin Johnson, Stafford’s best weapon ever, retire early. Like Barry Sanders before him.

But that’s a whole other thing. Back to that Mahomes point: if Stafford had anywhere near the supporting cast Mahomes had in Kansas City, then Detroit would be winning a lot more games, and Mahomes-esque throws like this by Stafford wouldn’t fade into afterthought obscurity:

Here’s a fun fact: Before then-rookie Kerryon Johnson ran for 101 yards against the New England Patriots in 2018, do you know who the last single-game, 100-yard rusher was for the Lions?

That aforementioned 2018 campaign also happened to be head coach Matt Patricia’s first at the helm. The alleged defensive genius from the Patriots was a downright disastrous hire who — poetically, in light of that Bush reference — was fired earlier this season following Detroit’s humiliating 41-25 Thanksgiving Day loss to the Houston Texans.

Ranking in the NFL’s bottom three in total defense each of the last two years probably shouldn’t be happening under the watch of a defensive-minded coach if he’s at all competent. Patricia wasn’t. He rightly got sacked.

So, no semblance of a rushing attack to complement Stafford, nor a decent enough defense to stay competitive throughout his entire tenure. It’s a wonder the 32-year-old led the Lions to three playoff appearances up till now.

This man doesn’t care. Stafford has been a model professional throughout his too-lengthy Detroit tenure and could’ve easily demanded a trade out of the Motor City many moons ago. Instead, he stuck it out.

Despite dealing with injured ribs prior to Week 14’s game against the playoff-bound Tennessee Titans, Stafford was in action for a team that had nothing to gain but draft position through a loss. He was 22-of-32 passing for 252 yards and a touchdown.

Asked why he played when basically nothing was at stake for him or the Lions, Stafford’s response was telling:

If that’s not someone who deserves to go to a franchise that serves him better, who is of such merit?

Despairing for someone and having empathy for them is all relative, of course. Given the truckloads of cash Stafford has made throughout his NFL career, many will simply not care about his plight. OK, in the context of whatever else may be going on amid the chaotic year of 2020, valid point.

But speaking purely in terms of the sports world, it’s an absolute shame that Stafford has had to put up with the Lions’ ineptitude for this long.

Stafford didn’t miss a start in eight consecutive seasons before getting knocked out of action for exactly half of 2019. He’s fought through injuries this year, only to go down with an ankle injury very early in Saturday’s latest humiliating loss to the Tampa Bay Buccaneers.

For someone who’s thrown for over 45,000 yards, and 279 touchdowns against 143 interceptions, it’s quite baffling that Stafford has been named to only one Pro Bowl. Much of it’s due to his surroundings.

As losses have continued to pile up, Detroit has positioned itself for a new era. At this rate, the Lions will be high enough in the draft where a new head coach and general manager, hopefully on the same page about bringing a consistent winner to the long-maligned team, can find a new quarterback of the future.

Given all the praise yours truly has heaped on Stafford, why would a seemingly competent coach-GM combo move off him in 2021? Well, an incoming rookie signal-caller would be much more cost-effective, and it’d be a selling point for a fanbase who hasn’t seen Stafford take them to the postseason since 2016 — through no real fault of his own.

The big win for Stafford and casual NFL fans who appreciate his talent is that he finally has a chance to go to a new team and self-actualize as an elite NFL quarterback.

Who wouldn’t want to see Stafford join forces with an play-calling guru like Kyle Shanahan on the San Francisco 49ers? Or supplant Mitch Trubisky with the NFC North rival Chicago Bears? Or boost the Indianapolis Colts to Super Bowl contention by replacing the aging Philip Rivers?