Find out who the biggest winners and losers were in Saturday's AFC Divisional Round action, as the Buffalo Bills defeated Baltimore to advance. 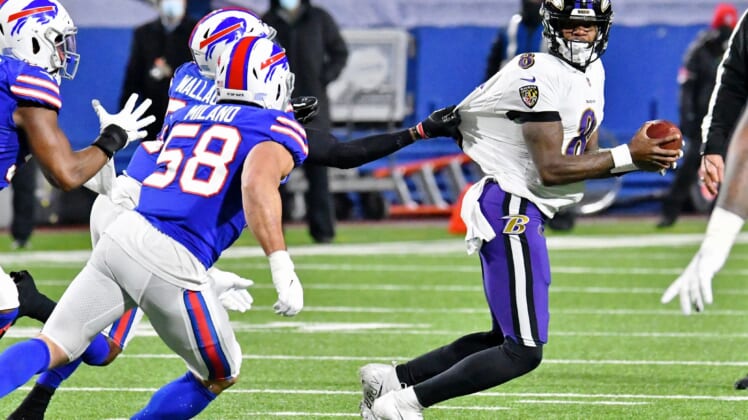 The first leg of the 2021 AFC Divisional Round was a gritty, throwback game determined largely by the mettle of defenses, as the Buffalo Bills emerged with a 17-3 home victory over the Baltimore Ravens on Saturday evening in Western New York.

Usually, in a high-scoring affair, it’s pretty easy to determine winners and losers rather easily. In increasingly rare cases such as these when there were so few splash plays made in any of the three phases of the game, though, it’s more difficult to find the positives.

In any event, we’ll give you the winners and losers from this Bills-Ravens slugfest.

The winning signal-caller lands here almost by default, and Bills wideout Stefon Diggs deserves an honorable mention thanks to his knack for getting open.

It’s an unavoidable narrative, though: Allen was the third QB selected in the 2018 NFL Draft, going seventh overall to Buffalo, while Jackson had to wait until the final pick of the first round (No. 32) to hear his name called after Baltimore traded up to get him. Talk about a sick walk-off move for Ozzie Newsome, netting an eventual second-year league MVP with his final first-round selection.

Anyway, Allen and Jackson have emerged as the most promising field generals from that class, along with top pick Baker Mayfield of the Cleveland Browns. All of them were alive entering the AFC Divisional Round — how exciting!

But only one man could win this Saturday in Buffalo, and it was Allen. There was clearly more trust in the Bills’ rising superstar, who isn’t quite the dual threat as a runner that Jackson is — who is? — but is indubitably the superior passer.

For better or worse, the Bills put the ball in Allen’s hands and told him to will them to the AFC Championship Game against a defense that boasts a pressure-heavy front and excellent back end headlined by cornerbacks Marcus Peters and Marlon Humphrey. Allen came through, finding Diggs for eight catches, 106 yards and a score. Allen ultimately delivered, finishing with 23 completions on 37 attempts for 206 yards and the touchdown to Diggs amid blustery conditions.

Two bricked field goals off the uprights. It was truly shocking to see Tucker do such a thing, considering he’s quite literally the most accurate kicker in league history at over 90%.

Tucker could’ve had the Ravens up by six points entering halftime if he’d just done his job. Easier said than done, of course, because the wind was howling at Bills Stadium, making the task difficult for Tucker and his counterpart, Tyler Bass, a rookie phenom who misfired on his own 43-yard attempt.

It’s just jarring to see any kick that leaves Tucker’s golden right leg go awry, much less two. The added sound effect of the ball clanging off the left upright the first time, and the right post on the subsequent miss, added to the drama in an otherwise relatively boring game with no offensive fireworks early.

Based on how the game ultimately played out in the second half, Tucker’s misfires proved to have a major impact on how the momentum of the game could’ve changed.

When you’re Googling weather for Orchard Park, New York, it’s probably a sign that greater forces are at work than merely what’s happening on the gridiron.

What the data says is the wind for this game was at a steady 18 mph, but there were gusts throughout the night that were impossible to predict. According to the NBC telecast, gusts got up to approximately 30 mph, which had a massive effect on how even a cannon-armed quarterback like Allen could throw the ball.

If someone as good and talented as Allen has been this season can’t cut that breeze, something is seriously up. Whether it was punts completely ballooning in the air, Tucker’s kicks taking hard left and right turns or Allen missing Diggs by about seven yards on a wide-open, would-be touchdown in the first quarter, Mother Nature had her way tonight.

As mentioned at the top, you have to get pretty creative to unearth a lot of winners here. The intangible, inclement elements played a large part in determining the outcome, and for fans of old-school football, this was certainly a fun clash of AFC titans to behold.

AFC Divisional Round loser: The offensive game plan for both teams

There’s an intended double meaning there for sure: What Ravens play-caller Greg Roman and Bills mastermind Brian Daboll came up with was downright offensive.

Yes, there was a lot of wind swirling in Buffalo, which we covered in the section about Tucker’s maligned kicks. That said, it doesn’t excuse how strangely both top assistants decided to attack the opposition on offense.

Roman failed to stray from the running game. Obviously, that’s a big part of Baltimore’s success thanks to the unique skill set of Lamar Jackson. However, Buffalo was selling out to stop the run, and Marquise Brown was coming off a seven-catch, 109-yard performance in the Ravens’ Wild Card win over Tennessee.

It stands to reason Brown could’ve gotten more involved early and helped the Ravens build an early lead, perhaps not putting Tucker in position to convert such difficult field goal tries. Alas, that’s not what happened, and Jackson wound up throwing a devastating pick-six to seal the Ravens’ fate.

In stark contrast, Daboll went full freaking send and decided to attack Baltimore’s secondary from the jump. Forget establishing the run, or the fact that the Ravens were trying to pound the Bills’ front seven into the turf. No, Mr. Daboll — by all means, keep just bombing the ball downfield with Josh Allen instead of striking any semblance of balance.

The result of Daboll’s ridiculous tactics? By halftime, Allen had attempted 22 passes, carried the ball twice as a runner and was sacked once. The only other play? A three-yard run by Devin Singletary. Baltimore won time of possession 20 minutes to 10.

Really, like, what was going on out there with Roman and Daboll? Neither man adjusted to what the other was doing, the inclement weather or really anything else at the start. Daboll at long last went to the run to open the second half, and what do you know? Touchdown.

Gosh, let’s end this dance on an uplifting number.

Frazier is among the long-tenured minority coaches around the league who probably doesn’t get enough love. Sean McDermott deserves all the credit in the world for changing the Bills’ culture, and he’s a defensive guru in his own right. But Frazier is calling the shots, and against such a unique player in Jackson, he did a phenomenal job.

Not only did Frazier sell out to stop the Ravens’ backfield tandem of Gus Edwards and J.K. Dobbins, but he also made sure to scheme up a way to prevent Jackson from ripping off chunk plays of his own on the ground, either through designed QB runs or on scrambles.

Jackson seldom got loose on Saturday, and when he did, Frazier made him earn every yard through the air on broken plays and just kept coming at him, putting his players in position extremely well for most of the contest to close Jackson’s running lanes. As everyone knows, the young phenom doesn’t end much of a crease to take it to score from anywhere on the field.

Thanks to dialing up pressure down near the goal line, Frazier forced an incompletion from Jackson on 2nd and Goal that could’ve resulted in the tying touchdown to a wide-open Marquise Brown.

On the next play, Frazier’s savvy schematics forced an interception in the end zone, which Taron Johnson took 101 yards to the house, all but putting the game out of reach for Baltimore.