Can Chicago Bears general manager Ryan Pace regain the trust of the fanbase with a strong 2021 NFL Draft? A big decision looms with the 20th overall pick. 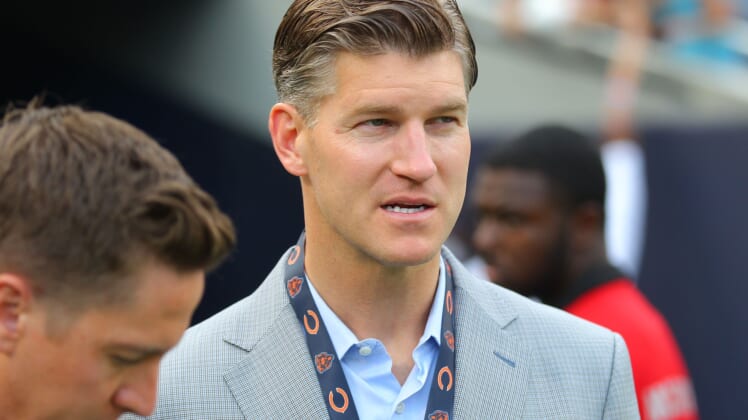 The Chicago Bears have an obvious need at quarterback, but thanks to their trip to the NFL playoffs, they aren’t picking until 20th overall in the 2021 NFL Draft, putting them out of range of the top-tier prospects without a massive trade to move up.

At least Chicago has its full complement of picks after being without two-first rounders in recent years as part of the Khalil Mack trade. There’s no way the Bears have buyer’s remorse about dealing for Mack, but you can bet general manager Ryan Pace has had a few sleepless nights about drafting Mitchell Trubisky over Patrick Mahomes and Deshaun Watson.

Can Pace redeem himself with an improved quarterback depth chart in 2021? Probably not through the draft. Let’s look at where Chicago can best improve through the 2021 NFL draft with their top picks in the first two days, with the updated order coming courtesy of Tankathon.

Let’s just start with Jones, who led the Crimson Tide to yet another national championship with an efficient season. However, he was throwing to the likes of Heisman Trophy winner DeVonta Smith, and had Najee Harris in the backfield to complement Alabama’s passing attack. That’s what makes evaluating Jones so tricky.

Jones doesn’t have a transcendent arm, yet he’s accurate to all areas of the field. The bigger concern is his lack of athleticism and how that’ll translate to the pros when he’s under siege. The Bears aren’t exactly equipped right now to be patient with a rookie signal-caller, so look for Pace and the front office to deeply consider Jones in their QB evaluations, but to ultimately pass him up if he’s there at No. 20.

The big contenders to go off the board, then, are Ojulari and Bateman. It’s likely Texas’ Joseph Ossai will have heard his name called already, so that leave Ojulari as the obvious scheme fit for what Chicago does defensively.

Ojulari would benefit from having Mack opposite him, and he can also make plays off the ball when he’s not wreaking havoc on the opposing passer. For the Bulldogs this past season, Ojulari had 12.5 tackles for loss to go with 9.5 sacks in 10 SEC games. Pretty impressive stuff, that.

As for Bateman, he’s a big, physical outside receiver who’d help compensate for the probable departure of prized free agent wideout Allen Robinson. No. 1 receivers don’t grow on trees, and in the modern NFL, it’s a necessity. Bateman has the skill set to be just that — an instant impact alternative to shelling out for Robinson or another player on the open market.

The wide receiver class really is stacked, so St. Brown might’ve been a later first-round choice in other years, but the Bears would love to see him fall to 52nd so they could swoop in to get him.

As we just alluded to, Robinson is going to want to play for a proven, superior quarterback, as opposed to the likes of Blake Bortles, Trubisky and Nick Foles, who’ve been the primary throwers of passes to him throughout his NFL career.

But even if the QB situation is vastly improved and Robinson does defy the odds to return, it still makes sense to plug St. Brown in. Anthony Miller has been inconsistent and disappointing during his first few seasons as a pro despite excellent route-running ability, so the need for a viable No. 2 or a new top receiver is palpable in the Windy City.

Over the course of three years with the Trojans, St. Brown, who played as a freshman, averaged approximately 75.6 yards per game. That’d equate to a 1,200-yard 16-game campaign in the NFL if his production were to continue at that rate. It’s a tall order, but don’t put it past St. Brown, who’ll have a healthy chip on his shoulder if he lasts this long in the draft.

If the Bears pass up a competitive, strong-handed catcher like St. Brown — who looks somewhat like a slightly taller version of Jarvis Landry — then the next-best option would be to address the secondary with someone like Robinson or Nasirildeen. Either of those DBs would bring extreme physicality and hard-hitting to Chicago’s back end.

Picking up steam as a rising player at the Senior Bowl practices, Meinerz is jumping out to scouts who were able to observe drills.

Despite playing for a Division III program, there’s no question Meinerz did more than just about any prospect to boost his stock in Mobile, Alabama. As long as he lives up to that hype, Chicago should nab him in Round 3 to continue to help tailback David Montgomery find running lanes.

The other interesting direction Chicago could take this is by selecting Newman, who opted out of 2020 after transferring to Georgia. It would’ve helped to be in an offense that could better showcase his strengths than Wake Forest did, and against SEC competition, no less. Alas, Newman made his decision, which may have cost him a shot at being a top-64 pick.

But Newman still has time to put on a show for NFL evaluators leading up to the draft, whether it be during workouts or in pre-draft interviews. He has excellent size, running ability and is among the best deep-ball throwers in the entire 2021 class. If Bears coach Matt Nagy is, in fact, an offensive guru, he might be the perfect man to develop Newman into an eventual starter.

Cole Kmet has the tools to be more of a receiving threat than a strong blocker, and while his former teammate Tremble is a capable catcher, he’d help shore up the depth at Chicago’s tight end position, as Jimmy Graham’s future is uncertain. It’d be a fun reunion for the Fighting Irish standouts, and it’d help the Bears’ offense, too.

Chicago Bears mock draft: No reaching for a rookie QB in Round 1

There are pretty clear needs across the roster that Chicago can address in the first three rounds of the 2021 NFL Draft. Other than quarterback, Ojulari plays a position that’s as valuable as any on the field. He’s an exciting fit at the second level of the Bears defense if he has studs like Mack and Roquan Smith flanking him.

St. Brown just seems too good for the Bears to pass on, and considering Nagy likes incorporating some spread principles into his passing attack, the adjustment from college to the pro game won’t be as significant for the USC wideout than it otherwise could be if he’s tasked to be an immediate contributor somewhere else.

Finally, we have Meinerz, and it’s totally possible he’s out of his depth in the pros after playing in Division III. At least at the Senior Bowl, though, Meinerz looked like he more than belonged and could definitely serve as one of the steals of the draft depending how far he falls. Don’t be shocked if he somehow sneaks into Round 2.

Overall, this is a strong start to the Bears’ 2021 draft class. They should really consider trading for a veteran or a younger QB with multiple years of experience. Otherwise, there’s always free agency if the opportunity presents itself.