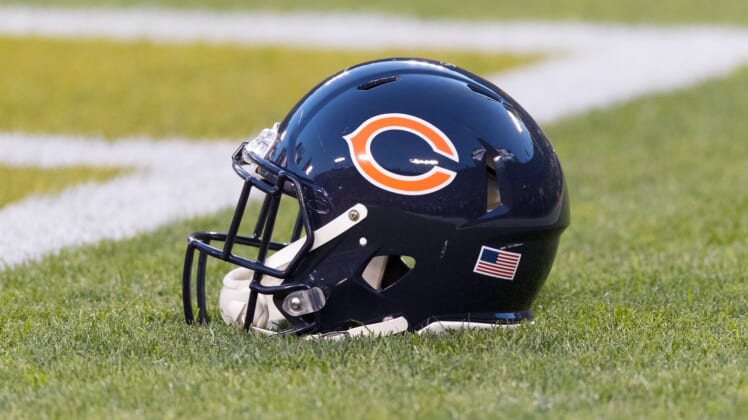 Sep 28, 2017; Green Bay, WI, USA; A Chicago Bears helmet on the field during warmups prior to the game against the Green Bay Packers at Lambeau Field. Mandatory Credit: Jeff Hanisch-USA TODAY Sports

The Chicago Bears will never live down the moment they selected Mitchell Trubisky over Deshaun Watson and Patrick Mahomes. It will go down as one of the worst draft-day decisions in NFL history, a move that will follow this team into 2021 with general manager Ryan Pace and head coach Matt Nagy returning.

While ownership’s decision to keep Nagy and Pace may prove costly, the fallout will be even worse if their mistakes aren’t corrected. Entering the offseason, there is more pressure than ever for the Bears to find a quarterback who can take advantage of a playoff-caliber roster.

It’s far easier said than done, especially in 2021. The NFL salary cap will take a hit this year, due to to the COVID-19 pandemic. As a result, the Bears will have even less money to spend. Currently, per Over The Cap, Chicago projects to be right at the NFL salary cap for next season. Even with a few cost-cutting moves, there won’t be nearly enough to sign a high-end passer.

With that in mind and considering where this team sits in the 2021 NFL Draft, let’s examine the best options to become the Chicago Bears’ starting quarterback in 2021.

Who will be the Chicago Bears quarterback in 2021?

There could be marquee signal-callers available this offseason. The Atlanta Falcons have expressed an openness to trading Matt Ryan and Dak Prescott is scheduled to hit free agency. Meanwhile, Matthew Stafford could be on the move and superstar quarterback Deshaun Watson might want to free himself from the Houston Texans.

Unfortunately for Chicago, immediate issues rule out each of those quarterbacks. Prescott and Ryan are too expensive financially, the Lions won’t trade Stafford in the division and Watson almost certainly won’t be moved. So, we turn our focus to the best alternatives available.

The best-case scenario For Chicago’s long-term interests is trading up in the 2021 NFL Draft. While the organization has no shot at landing Trevor Lawrence and Justin Fields is likely a pipe dream, there are scenarios where Zach Wilson and Trey Lance could be available. In those scenarios, however, it requires trading up into the top-10 picks.

Jumping into the top-four selections likely costs Chicago three first-round picks, that’s the cost of jumping up when you ride a winning streak to false hope and a first-round knockout in the playoffs. This could be an ideal move for the Bears. While it sacrificed top picks in the next two years, Lance’s physical talent is right up there with Wilson. He’s more of a project after playing in just one game during the 2020 college football season, but he could buy Nagy and Pace some time. Plus, if he proves to be NFL-ready as a rookie, his unique skills could help turn this team into a legitimate playoff contender.

If the Bears want to take a win-now approach with the safest option this offseason, that is FitzMagic. The 38-year-old lost his job to Tua Tagovailoa this season, a decision that hurt him after years of constantly being replaced by a younger quarterback. Bit Fitzpatrick is an incredible teammate, a tremendous mentor for young signal-callers and he comes through when called upon.

Consider his role in the stunning 2019 upset against the New England Patriots or when he came off the bench and delivered a last-second victory over the Las Vegas Raiders in December. He seems to love the big moments and it’s not like he isn’t productive. Fitzpatrick posted a 13-8 TD-INT ratio this season, completing 68.5% of his passes for 2,091 yards, 7.8 yards per attempt and a 95.6 quarterback rating. In 15 games across the 2019 season, he had 3,529 passing yards and a 20-13 TD-INT ratio.

He wants an opportunity to start and the Chicago Bears can offer that to him. Even if Trubisky returned, he would lose any quarterback competition. Plus, as we’ve seen in every stop of his NFL career, Fitzpatrick is the type of leader who an entire locker room rallies around. That sounds like something Chicago could use next season.

Reach for Mac Jones with the No. 20 overall pick

Credit to Mac Jones for a season no one saw coming. While Alabama’s 6-foot-3 quarterback showed some nice flashes in 2019 following Tua Tagovailoa’s hip injury, no one saw Jones playing at this level. Under the direction of a new quarterback, the Crimson Tide’s offense improved upon its 2019 numbers in both passing yards per game (342.2 to 358.2) and points per game (47.2 to 48.5). Oh, he also delivered the greatest single-game performance by a quarterback in College Football Playoff history.

In terms of physical traits, there isn’t a ton of upside for the incoming quarterback prospect. He brings solid arm strength to the table, but not enough to make a lot of deep throws. He does excel in some areas. Jones does a great job progressing through his reads, is an extremely efficient passer and could thrive in an offense with quick throws and one that occasionally utilizes vertical shots. That’s a top-40 talent, but the quarterback’s value will push him into the first round of the 2021 NFL Draft.

He’s certainly a better option than Trubisky. Chicago’s offense became far too predictable, even with the change in play-calling during the season. Jones, for all his limitations, would give the Bears a more effective passing attack. If the running game improves and the defense remains sharp, that’s enough to cause trouble in the NFC.

The New York Jets are open to trading Sam Darnold or the No. 2 pick in the NFL Draft. Given the massive cost differential between the two options, Darnold is the best choice. New York has every reason to move on from the No. 3 overall pick, he hasn’t played like a reliable starting quarterback in a few years. Keeping that in mind, the upside and talent could be appealing to the Bears.

Landing Darnold would likely cost Chicago its 2021 second-round pick. In exchange, Nagy gets to work with a 23-year-old quarterback that still offers plenty of potential. Keep in mind, Darnold faced the highest pressure rate in the NFL this past season and played behind one of the NFL’s worst offensive lines. The Bears could put him in a much better situation, creating an offense where he has time to throw and allowing him to play with confidence. They might not get a Pro Bowl quarterback out of it, but there’s more upside here than what Trubisky or Nick Foles bring to the table.

Roll the dice on Jameis Winston

Let’s take the Bears in the polar opposite direction of Trubisky. Instead of starting a quarterback who puts alarming limitations on an offense, making it predictable and allowing defenses to stack the box, Chicago can take its chances on Winston.

Yes, this is the same quarterback who threw 30 interceptions in 2019 and an NFL record seven pick-sixes that year. There’s plenty of bad that comes with Winston and we can’t ignore that. However, it’s also important to remember the good things we saw from him in 2019. According to Player Profiler, Winston finished first in deep ball attempts (113), second in touchdowns (33), 14th in pressured completion rate (37.2%) and had the eighth-most money throws (19) in the NFL last season.

He just spent a year with Sean Payton and Drew Brees, learning the finer points of playing quarterback from two of the NFL’s brightest minds. It’s an environment that can help a 27-year-old quarterback mature significantly and sitting on the bench likely served as more motivation. There are undeniable risks with Winston, but the Bears need a spark in 2021 and Winston could provide it as a free-agent signee.