Ryan Fitzpatrick replaced Tua Tagovailoa in Week 16. Chaos ensued, but Fitzmagic won out in the end for the Miami Dolphins. 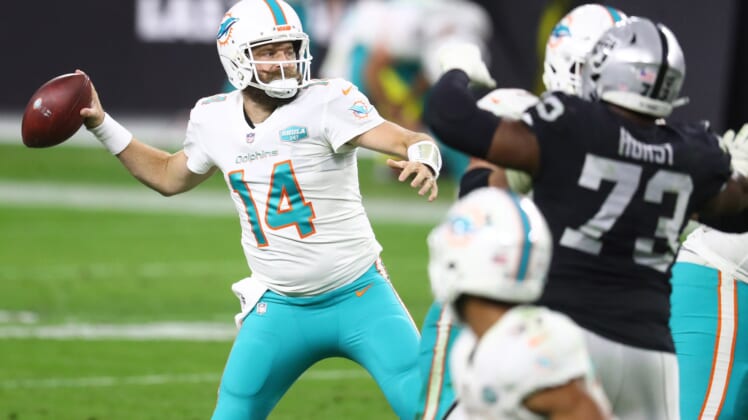 With playoff implications hanging in the balance, Dolphins head coach Brian Flores opted for Fitzpatrick’s superior experience to give the offense a spark. It marks the second time Tagovailoa has been benched in a game this season.

Naturally, social media had some thoughts on the matter, as Fitzpatrick wound up tapping into his trademark Fitzmagic to lead the team to three scores and a truly stunning 26-25 victory.

It’s difficult to figure out how Flores is making this work so well. During the NFL Network telecast, it was said Fitzpatrick and Tagovailoa haven’t divided the locker room, and that the players support both field generals fully.

The most logical explanation is that Fitzpatrick has the savvy and football IQ at this point in his career to give the Dolphins juice. Unfortunately for Tagovailoa, that means swallowing his pride and riding the pine while he learns the NFL game.

This doesn’t mean Miami is giving up on Tua as the long-term answer under center. It’s more a matter of Fitzpatrick giving a playoff contender a superior chance to win right now in 2020.

Oh, and there was some real Fitzmagic happening Saturday night. Despite getting facemasked while he released a deep ball on the Fins’ final possession, Fitzpatrick completed a 34-yard pass to Mack Hollins down the left sideline. The Checkdown provided the crazy footage:

With a 15-yard penalty tacked on, suddenly the Dolphins were in field goal range. Jason Sanders hit the game-winner from 44 yards away, just after Derek Carr and the Raiders drove for a go-ahead kick, leaving only 19 seconds on the clock.

Apparently that was too much time for Fitzpatrick to pull something out of his magic hat. He wound up completing nine of 13 passes for 182 yards and a touchdown in the final quarter.