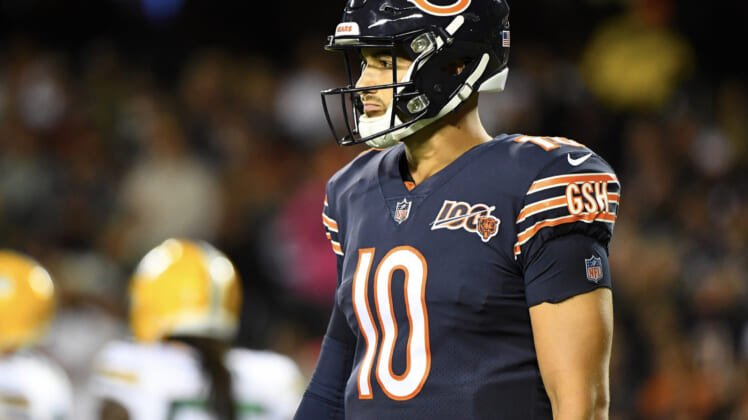 An impending free agent, the former No. 2 pick led Chicago to an 8-8 record and an appearance in the NFL Playoffs before last weekend’s loss to the New Orleans Saints in the wild card round.

Prior to a decent late-season run, talk surrounded the strong likelihood that Chicago would move on from Trubisky. That apparently is not 100% etched in stone right now. However, Bears general manager Ryan Pace made it clear in his end-of-season press conference that the Bears need more from the quarterback position — placing into question Trubisky’s future in the Windy City in the process.

Will the Bears move on from Mitchell Trubisky?

“Everything’s on the table now,” Pace said when addressing the quarterback position, via NBC 5 in Chicago. “We definitely need more out of the position. We know that. What does that entail? That’s what this whole offseason is about.”

Trubisky completed 67% of his passes for 2,055 yards with 16 touchdowns against eight interceptions in 10 appearances (nine starts) this past season.

He also led Chicago to an average of north of 31 points per game in his final five regular-season starts before bombing out big time in the wildcard round. The Bears lost to New Orleans, 21-9, in a game that was not anywhere near as close as the final score indicates.

Despite this, it’s rather clear that the Bears are not sold on Mitchell Trubisky. The team benched him in favor of Nick Foles back in Week 3 before having to turn back to him a month later after the latter suffered an injury. That’s a clear indication both Nagy and Pace are looking to move off the former No. 2 pick.

Interestingly enough, both have a lot riding on the Trubisky situation. Remember, Chicago traded up from the third pick to No. 2 overall to acquire the quarterback during the 2017 NFL Draft. Two of the picks moved in said deal ended up being All-Pro performers Fred Warner and Alvin Kamara.

As for Foles, he has a $6.7 million cap hit for the 2021 season. However, the Bears would incur a $14.3 million dead cap hit by releasing him. At the very least, the former Super Bowl MVP will return as a backup. That leaves Trubisky’s situation up in the air.

Bears quarterback options should they move on from Mitchell Trubisky

The backdrop here promises to be a fluid trade market at the quarterback position once the new league year comes calling in March. Among those potentially available is Illinois native Jimmy Garoppolo.

Despite his injury woes, the Super Bowl quarterback would be seen as an upgrade over Trubisky. He’d also come relatively cheap with the 11th-highest cap hit among quarterbacks in 2021 at $26.2 million.

Another option would be to trade for fellow former No. 2 pick Carson Wentz, who wants out of Philadelphia after being benched in favor or rookie Jalen Hurts this past season. Wentz’s contract could be problematic, but much like Garoppolo, he’d come cheap in terms of compensation in a potential trade.

Matthew Stafford (Lions) and Matt Ryan (Falcons) are also potential trade options for the Bears. However, it’s hard to imagine the Lions trading Stafford to a division rival.

Either way, it’s now increasingly clear that the Bears are looking to upgrade from Mitchell Trubisky at quarterback. How that might looks is anyone’s best guess.