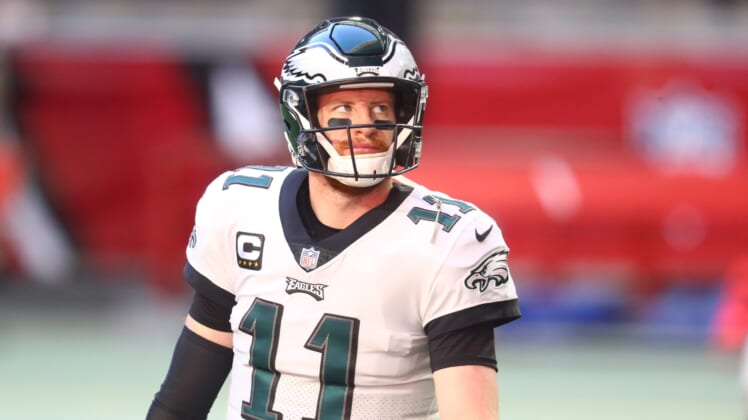 The Philadelphia Eagles will close out a disappointing season in Week 17 with Jalen Hurts as the starting quarterback. Now, following a year Carson Wentz would love to forget, the former star is ready to force his way out of Philadelphia.

A month after being benched by the Eagles, Wentz is seemingly disgruntled with how the organization treated him in 2020. In the early years of a lucrative contract, the 28-year-old is now ready to find a new home.

According to ESPN’s Chris Mortensen, Carson Wentz plans to ask the Eagles for a trade this offseason. After months of head coach Doug Pederson sticking by him, pulling the plug on Wentz and making Hurts the starter seems to have done irreversible damage.

Pederson stood by Wentz for months, amid growing calls for a change at quarterback, even as he continued to struggle. When Hurts finally took over, Wentz led the NFL in interceptions (15), sacks (50) and was one of the most inaccurate quarterbacks in the league.

With Pederson expected to return as head coach in 2021, Wentz wants out of Philadelphia. The relationship between the two is reportedly fractured beyond repair, causing the former Pro Bowl quarterback to seek a trade.

It’s a request the Eagles should be happy to fulfill. Wentz is one of the highest-paid quarterbacks in the NFL, but hasn’t lived up to his contract extension. Barring the former No. 2 overall pick entering in Week 17, he will finish the 2020 season with a 72.8 quarterback rating, 16/15 TD/INT ratio and a 57.4% completion rate.

Teams are already expressing interest in Wentz. The Indianapolis Colts, San Francisco 49ers, New England Patriots, Denver Broncos and Washington Football Team could all be in the market for quarterback upgrades this offseason.

While there will be suitors, pulling off a trade is a bit complicated. Dealing Wentz would leave a $$3.8 million cap hold on the team’s salary cap, a massive number for a player who wouldn’t even be on the team’s roster. His contract will also limit the potential return they receive in a trade, too.

Eagles rumors: Team unlikely to get much in Carson Wentz trade?

The Eagles will certainly be one of the most fascinating teams to watch this offseason. If they are confident Hurts can be their long-term quarterback, they can use the 2021 NFL Draft to build an offense around him. If there is any doubt about his starting abilities over a full season, Philadelphia will need to find a reliable backup.

With little cap space to address needs on both sides of the ball, it could be a rough spring for the Eagles. As for Wentz, he’ll have to prove that his woes this season were a reflection of the team around him and not of his own regression.