The Philadelphia Eagles are reportedly likely to hang on to head coach Doug Pederson at least for the start of the 2021 NFL season. 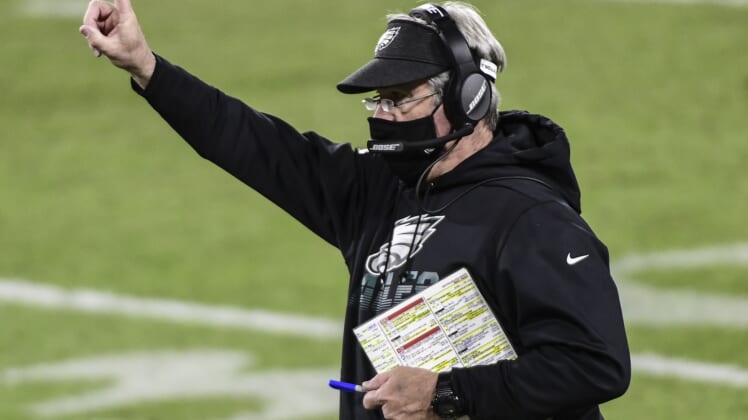 The Philadelphia Eagles apparently aren’t ready to give up on their Super Bowl-winning head coach Doug Pederson just yet.

Despite entering Week 17 with a woeful 4-10-1 record, Pederson is reportedly safe for the 2021 campaign. If that is indeed the case, it’s likely the Philadelphia coach will have among the NFL’s hottest seats this coming season.

Rumor has it that owner Jeffrey Lurie is unhappy with how the Eagles have performed throughout the season, yet the fact that Philadelphia has shown signs of life of late has helped Pederson’s credibility remain more intact than it otherwise would’ve been.

Pederson’s overall record to this point is a respectable 42-36-1, with a 4-2 mark in the playoffs despite key injuries striking in all three previous postseasons he’s qualified for during his Eagles tenure.

Known for his offensive prowess, it’s not a great sign that Philadelphia has regressed to the eighth-worst scoring offense entering Week 17, averaging just 21.3 points per game.

Well, geez that’s an obvious statement to make. What’s meant by it is, the Eagles have a lot more questions surrounding their organization than most franchises around the NFL.

The biggest uncertainty is the quarterback situation. Schefter implied in his report that the progress rookie Jalen Hurts has made in a short time reflected positively on Pederson’s ability to develop players in conjunction with his staff. however, Hurts was thrust into the lineup in the first place due to Carson Wentz collapsing into one of the game’s worst QBs.

Some of the struggles Wentz endured can be pinned on Pederson. That said, he did manage to win Super Bowl XXXI with Nick Foles under center, and had Foles fill in for an injured Wentz to make the playoffs again the subsequent year.

The COVID-19 pandemic made things difficult on all 32 teams, and Philadelphia was beset by multiple injuries, particularly on the offensive line. Hurts’ athleticism and ability to run the ball was definitely a better fit for that adverse situation, yet Wentz’s regression was among the most shocking developments of the year.

Beyond that QB conundrum and the grueling prospect of trading and permanently replacing Wentz, the Eagles are slated to be $70 million over the salary cap for 2021, per Over the Cap. Offloading Wentz will presumably mean some dead money costs, so there’s not much relief in sight from that standpoint.

How well can Philadelphia rebuild its roster on the fly? Will its high pick in the 2021 NFL Draft result in a trade down for multiple assets and a youth movement, which could hinder Pederson’s ability to post a winning record?

It’s probably going to take a playoff berth for Pederson to keep his job beyond next season. With the way the Eagles are constructed as of now, unless Hurts evolves into a superstar in Year 2, that’s a tall order for Pederson to fulfill.