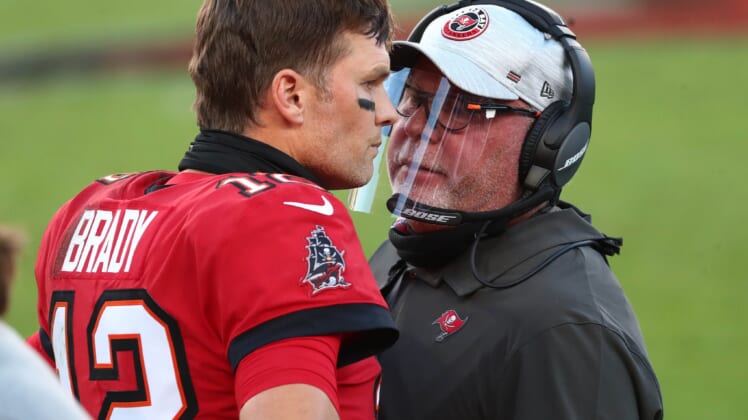 There are five successful NFL head coaches who are quickly losing traction on their job security despite a proven track record of results, and most of the names on this list may surprise you.

The candidates in question have either been to the playoffs multiple times, are hailed as relatively young, bright minds or have even won a Super Bowl. Nevertheless, the National Football League mandates constant adapting, changing with current trends and sustained excellence in charge of a team. Find out which five men may not seem like mortal locks to be fired just yet, but are definitely getting closer to that hot seat.

Pederson’s latest debacle in Monday night’s 23-17 loss to the Seattle Seahawks is a testament to how seemingly lost the Eagles are. Whether it be dubious decisions to kick or go for it on fourth downs, or it’s an inability to competently substitute Jalen Hurts as Carson Wentz’s replacement for the remainder of the year, Pederson is a far cry from where he was when he went 13-3, won the NFC East and Super Bowl LII in a magical 2017 run.

Is it a coincidence that Philadelphia hasn’t nearly reached those heights since offensive coordinator Frank Reich departed after that year to become the head coach of the Indianapolis Colts? Seems less like a coincidence and more like a direct cause for the Eagles’ latest woes.

Consider that since Reich’s departure, Pederson has a 21-21-1 regular-season record and a 1-2 postseason mark, and quarterback Carson Wentz has regressed from MVP-caliber player to one of the worst at his position amid a 3-7-1 nightmarish year through Week 12. Ownership reportedly isn’t pleased.

Maybe Reich really was that good, and even with less-than-ideal situations under center in Indianapolis, Reich has made it work. Heck, he still has an immobile, 38-year-old Philip Rivers playing winning football for the Colts, who are squarely in the AFC South division title race and are looking good for a Wild Card berth.

Meanwhile, Pederson can’t even get Philadelphia to the top of the NFC East, which is quite easily the worst in all of football. Not just this year. Maybe ever. If the Eagles continue regressing like this, and owner Jeffrey Lurie uncharacteristically doesn’t attend additional contests in person, it doesn’t exactly bode well for Pederson’s long-term outlook — much less his job security in 2021.

Offensive genius? Doesn’t seem like a worthy designation for Nagy. Granted, making Mitch Trubisky a franchise quarterback was never going to happen, and while Nagy did rise to prominence with Trubisky under center en route to a 12-4 record, NFC North title and Coach of the Year honors in 2018, the alleged 42-year-old wizard has seen his magic dry up in a big way this season.

Nagy tried everything he could as a play designer. Those efforts always seemed a little too cute, as if Nagy was trying to prove his genius at drawing up imaginative plays as opposed to putting his players in position to execute. OK, no problem. He recognized his shortcomings, and deployed Bill Lazor as the new play-caller. Whether it’s been prior Super Bowl MVP Nick Foles or Trubisky at the controls, though, the Bears continue to squander an elite defense with just brutal offensive performances. And Nagy had the nerve to point fingers at Chicago’s clearly superior side of the ball following Sunday night’s 41-25 loss to the Green Bay Packers.

Despite the fact that Trubisky is a lame duck whose fifth-year contract option was declined, Nagy refuses to assemble a game plan to play to his best attributes. Those are the following: running the football, and simplifying to a more college-style, spread and uptempo offense. Trubisky is an excellent athlete who has shown time and again his ability to scamper. The mere threat of him running opened up David Montgomery for his first 100-yard game of 2020 in Week 12.

Unfortunately, Trubisky’s lack of prowess as a passer, combined with Nagy’s staff not calling enough designed runs, roll-outs and play-action passes for the embattled quarterback, led to disaster. Well of course, the Bears did have an off day defensively and got torched by Aaron Rodgers.

Was that a function of the Packers’ high-level execution, or a defensive unit that was simply tired of dragging the horrid offense along? Nagy can’t really hold his own among NFL head coaches if he’s this apparent offensive savant whose team ranks 31st in third-down conversion success (31.72%) and total yards per game, not to mention fourth-worst in points per game.

It’s almost inevitable Chicago general manager Ryan Pace is going to be shown the door once the 2020 season concludes. Nagy is getting to the point where he could follow him if he can’t secure a postseason spot despite a 5-1 start.

Arians is a stubborn coach who refuses to play to the strengths of Tom Brady, the greatest quarterback of all-time. Brady made his living in two decades and seven Super Bowl titles with the Patriots primarily with a short, precision-based passing attack. With so many weapons in Tampa Bay, the thought was if TB12 was going to thrive in Tampa Bay, it’d be through getting the ball out fast to playmakers like Mike Evans, Chris Godwin, Rob Gronkowski and now Antonio Brown, letting them do their thing in space.

Instead, offensive coordinator Byron Leftwich and Arians design baffling game plans that force Brady to hang in the pocket behind a banged-up interior line, wait for long-developing plays to unfold, and hope the “no risk it, no biscuit” style of play works out.

While Evans, Godwin, Brown and Gronkowski are capable of making plays vertically and tracking the ball on deep throws, that’s not Brady’s forte. While the arm strength is there, it’s really difficult to ask a man who’s played in the same system for 20 years to execute an entirely new scheme with so little carryover. Plus, the Bucs abandoned the run too early in losses to New Orleans and Kansas City, logging a combined 18 carries in those defeats.

Despite the fact that Arians has been responsible for either major injuries or creating a shaky, injury-plagued foundation for great quarterbacks such as Andrew Luck, Carson Palmer and Ben Roethlisberger, he’s not changing for anyone. Not even Tom Brady. That’s ridiculous, especially since the Bucs may have the best collection of weapons in the league and a top-tier defense that can keep Tampa Bay in any game as long as the turnover battle isn’t lopsided.

See, the Bucs have forced 20 takeaways, second only to the undefeated Steelers, but Brady and Co. have coughed up 16 turnovers — as many as the 1-10 Jacksonville Jaguars.

The high-risk, high-reward brand of offense Arians relentlessly preaches resulted in career-high, single-season INT totals for Luck, Palmer and Big Ben. Brady is on pace for 15 picks, which would be the most in any season for him, too. If the Arians’ rigidity persists through the Week 13 bye and the Bucs do no better than one-and-done in the postseason, Arians’ credibility will be low enough to justify firing him, which seemed borderline impossible prior to the season starting.

Go ahead and credit Zimmer if you’d like for helping the Vikings vault back into playoff contention following a 1-5 start. However, that’d just be the wrong thing to do, because offensive coordinator Gary Kubiak, quarterback Kirk Cousins and running back Dalvin Cook are much more responsible for the stunning turnaround to achieve a 5-6 record to date.

Cousins has thrown just one interception in his last five games, and Kubiak has leaned heavily on Cook to the tune of an NFL-leading 13 rushing touchdowns.

General manager Rick Spielman also hit an absolute home run in drafting first-round pick Justin Jefferson. The rookie receiver had big shoes to fill for Stefon Diggs, and has delivered in a massive way, with 52 catches, 918 yards and six scores through 11 games.

Zimmer is an old-school, defensive-minded coach whose unit ranks last in the NFL in yielding 16.4 points per game after halftime. That’s a reflection on coaching and the ability, or lack thereof, to make adjustments. This might be the oldest-school coach in the game at this point, and if Minnesota really is going to take the next step with Cousins under center, maybe a breath of fresh air would be good for the locker room.

If you look at the results on paper, Zimmer has been consistent if not spectacular at the helm of the Vikings. His worst record was in Year 1 (7-9), but he’s had three double-digit win seasons since, with eight-win campaigns sandwiched in between. Bottom line: if the Vikings’ momentum on offense halts or the defense proves too inferior down the stretch, they will have won only one playoff game under Zimmer through three years with Cousins.

None of that feels like reason to validate bringing back Zimmer for an eighth season. Then again, he signed a three-year contract extension in July, so he’s more of a hot seat candidate to watch for in 2021 or the year after, even if he’s resorted to publicly calling out his players when the defense isn’t performing up to snuff.

Start with the obvious one first, or save him for last? In this case, the way to go was to save McCarthy for the end. He’s an easy target right now, but the reason he doesn’t merit mention at the top is because it doesn’t feel like he’s in danger of being fired should the Cowboys fail to make the playoffs. This is in spite of the fact that as early as six games into McCarthy’s tenure, rumors surfaced about players questioning the competence of the head coach and his staff.

Owner and general manager Jerry Jones has put all his eggs in the McCarthy basket. The longtime Green Bay Packers boss who won a Super Bowl with Aaron Rodgers and made the postseason in nine of 13 years is last in an NFC East division led by two 4-7 teams as of this writing. While that’s not a great look for Year 1 of the McCarthy era, Jones isn’t likely to waver in his commitment.

To be fair to the veteran coach, who took last year off from football, just about everything has gone wrong for him in 2020. Franchise quarterback Dak Prescott suffered a brutal season-ending injury, and the offensive line is in taters after a slew of injuries. McCarthy built his reputation on offense, and he simply doesn’t have much to work with at the minute.

But let’s hold the man accountable where he deserves to be: elevating another old-school coach in Mike Nolan to defensive coordinator — after he’d spend the past five years focusing only on the linebacker position — was a bold move that isn’t working. Dallas has yielded 32.6 points per game, which is dead-last in the league.

NFL head coaches are in charge of assembling a strong staff around them. Maybe some input comes from the front office upstairs, yet a coach with McCarthy’s sturdy resume should’ve been able to net a better hire for that spot in particular — or had the foresight to hire someone more innovative and modern. To date, Nolan’s scheme has proven too multiple, complex and cute for the Cowboys to execute it with any kind of consistency.

After a humiliating 41-16 loss to Washington at home on Thanksgiving, McCarthy dropped to 3-8 on the season. But with strong support from Jones, don’t expect McCarthy to be given the pink slip after the 2020 campaign ends. If Prescott and the o-line are healthy, the secondary is upgraded and Nolan gets swapped out for someone better, next year McCarthy may have a chance to rectify a disastrous start for America’s Team.