How does this sound, Chicago Bears fans: Matt Nagy and Ryan Pace returning for the 2021 NFL season. Not great, right? 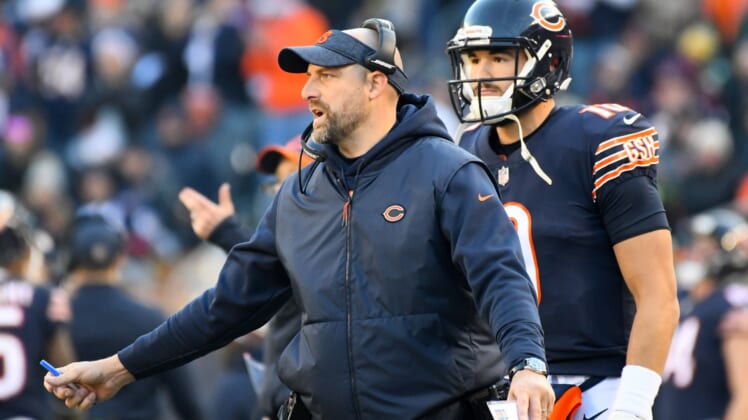 The Chicago Bears are determined to maintain organizational stability, perhaps at the cost of practicality and sanity, by announcing on Wednesday their decision to retain head coach Matt Nagy and general manager Ryan Pace for the 2021 season.

It seemed like a no-brainer for ownership to at least move on from Pace, who infamously drafted Mitch Trubisky over Patrick Mahomes and Deshaun Watson. There was an argument to be made Nagy should be shown the door after a second straight 8-8 season in which the offense looked bad, squandering another year of superstar pass-rusher Khalil Mack’s prime.

Alas, breezes of change are not yet blowing in the Windy City for the fans’ beloved Bears, which is really a shame.

“I was impressed with both of them,” said Bears chairman George H. McCaskey of Nagy and Pace in announcing the coach and GM would return for next season, per ESPN’s Adam Schefter.

So much to unpack here, not least of which is how out of touch the Bears organization is with their impassioned fans. Of course keeping Nagy and Pace isn’t a popular decision, because for the most part, it’s been absolutely disappointing.

In retrospect, Nagy wasn’t at all worth of his Coach of the Year honors in 2018. That dubious award admittedly sets the bar very high for a young coach going forward, and Nagy’s stale play designs have lost their luster.

Pace’s pick of Trubisky was grounds for termination on its own. What else has the GM done to address the most important position on the field? Signed Nick Foles last offseason to a three-year, $24 million contract, only for Nagy to flip-flop between the underwhelming Trubisky and the disappointing Foles all year long.

Bears quarterbacks averaged 6.4 yards per attempt, threw 26 touchdowns to 16 interceptions and had an 86.5 passer rating in 2020. Yikes.

Just wait: the next thing McCaskey says is Trubisky, despite the team not picking up his fifth-year contract option, will enter 2021 as Chicago’s unchallenged starting quarterback. The fact that this joke doesn’t stray at all from what well could be reality in the months to come is such a red flag, it’s hard to quantify or articulate.

How Matt Nagy, Ryan Pace can redeem themselves for the 2021 Chicago Bears

It’s pretty simple: Find a quarterback. Agree on someone who can lead this offense, and force Nagy off of calling plays. When Nagy ceded such duties to Bill Lazor during the 2020 campaign, the offense started to get going. The David Montgomery-led rushing attack suddenly woke up.

The only thing that was somewhat impressive about the Bears was their recovery from a six-game losing streak to make the playoffs at 8-8. But the defense carried Chicago to its hot start that preceding that tailspin, and the inconsistent, roller-coaster nature of the season doesn’t speak well to Nagy’s leadership abilities.

There does exist a world in which Nagy looks much better with competent quarterback play, though. Chicago must make the most of its talented defense while all the players are still in place, and that means going all-in on an upgrade over the Trubisky-Foles combination.

Anything short of trading for Deshaun Watson, Matthew Stafford or another established veteran — or not moving up in the 2021 NFL Draft order to land one of the top QB prospects like, say, North Dakota State’s Trey Lance — would be an absolute disaster. Nagy would lose the locker room this year without a clear plan at quarterback. Pace should already be out of a job because of his failure to evaluate and build depth at that position throughout his tenure.

Bears fans must feel let down, because their vacancies would’ve been among the most attractive in the NFL. Instead, Nagy and Pace remain in their posts, for better or worse. It’s probably for the worse if the last two years and their misguided loyalty to Trubisky are any indication.

Pace must have made a heck of a pitch to his superiors to save his job. Apparently Nagy did, too. If they can’t agree on a new, well-above-average quarterback, they’ll both get the pink slip soon enough.