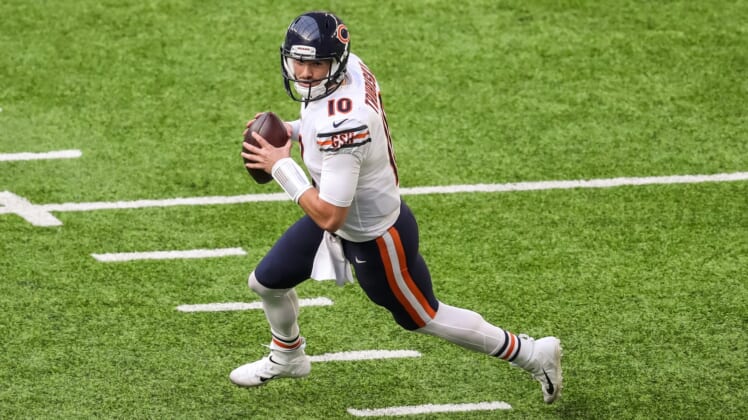 It seemed to be pretty obvious just a couple months ago that former No. 2 pick Mitch Trubisky and the Chicago Bears were heading for a divorce. The quarterback was benched in favor of Nick Foles just three games into the season despite boasting a winning record.

Since then, what we’ve seen from Trubisky and his Bears has been nothing short of extraordinary. Despite Sunday’s loss to the Green Bay Packers, Chicago is headed to the NFL Playoffs with an 8-8 record. This came after the team dropped six consecutive earlier in the season.

We now have some more information as it relates to Mitch Trubisky and his future with the Chicago Bears. In reality, it doesn’t tell us a whole lot about the impending free agent.

Fox NFL reporter Peter Schrager noted on Sunday that Trubisky and the Bears will not discuss his future until after the NFL Playoffs come to a conclusion.

In some ways, this makes perfect sense. Despite his recent success, the Chicago Bears are going to want to see what Mitch Trubisky can provide in a playoff atmosphere against the heavily favored Saints in New Orleans next week.

What Trubisky has done since replacing Foles under center has been awesome. He has thrown twice as many touchdowns (10) as interceptions (five) en route to leading Chicago to an average of north of 30 points in six starts. That helped Chicago sneak into the playoffs after the Arizona Cardinals were defeated by the Los Angeles Rams Sunday afternoon.

Despite this, the Chicago Bears could very well look to upgrade at the quarterback position. A lot of that will also depend on the future of head coach Matt Nagy, who seemingly saved his job with Chicago’s late-season run.

Chicago Bears quarterback options should they move on from Mitch Trubisky

This is a major backstory. There’s going to be a ton of proven talent available in free agency and via the trade block. Perhaps, the Bears view someone like Carson Wentz or Matthew Stafford as an upgrade over Mitch Trubisky. Illinois native Jimmy Garoppolo could become available, too.

As much as this might be tied to Matt Nagy’s future in the windy city, the same thing can be said about general manager Ryan Pace. He received a ton of flack for trading up for Trubisky during the 2017 NFL Draft. Pace’s own future with the Bears will likely depend on what happens with his hand-picked quarterback.

For now, Mitch Trubisky and the Chicago Bears are playing playoff football. How that turns out could dictate his future with the team. Stay tuned.