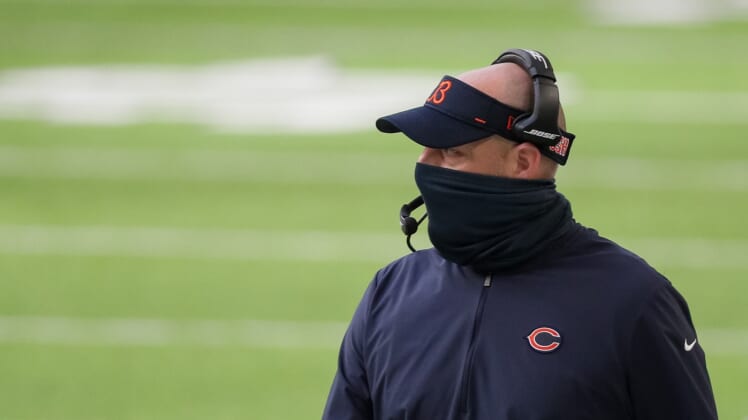 Just weeks after the Bears reportedly started looking into Pat Fitzgerald and weighing sweeping changes to the front office, Chicago now controls its playoff destiny. As a result, the futures for Nagy and Trubisky are changing.

Headed towards the bottom of the NFC North with a 5-7 record, the Chicago Bears started evaluating everything before Week 15. The 2020 season was at a pivotal point, with the final four games set to decide everyone’s fate.

Heading into the matchup against the Houston Texans, reports hinted Nagy would need a miracle to save his job. With Trubisky struggling, a rapid turnaround seemed unlikely. However, things have suddenly clicked offensively and the Bears seem convinced it will last.

On Sunday, ESPN’s Jeremy Fowler reported that many around the NFL believe the Bears will retain Nagy for the 2021 season. The blowout victory, which saw Jacksonville Jaguars fans cheering on Chicago, secured Nagy’s third consecutive season with eight-plus wins.

Naturally, Chicago’s path to eight wins this season has been a roller coaster. The Bears started out hot with a 5-1 record, making a case to be a Super Bowl contender. They even changed quarterbacks during that time, benching Trubisky for Nick Foles.

It didn’t take long for the wheels to come off with Foles under center. Following the 5-1 start, this offense fell apart and Chicago collapsed into a six-game losing streak.

Everyone in Chicago was either hoping for a miracle to salvage the season or a collapse to the finish, putting them in a position to land a top-10 pick in the 2021 NFL Draft. Coming out of nowhere, the Bears have won three consecutive games and can earn a playoff spot by beating the Green Bay Packers in Week 17.

It’s all a credit to Chicago’s offense, which is finally stepping up after being carried by the defense for most of the season. With Trubisky playing well and David Montgomery hitting his stride, this looks like a different team.

It’s an incredible turnaround and a credit to Nagy, who gave up play-calling duties to offensive coordinator Bill Lazor, Trubisky and the rest of the coaching staff. A win-and-in scenario for Week 17 seemed impossible, but now the Bears are four quarters away from making the NFL Playoffs as one of the hottest teams in the league.

This could all backfire, with everyone looking back on this time as Chicago simply beating up on inferior competition. Even if that’s the case, though, it’s clearly enough for Nagy to return next season.