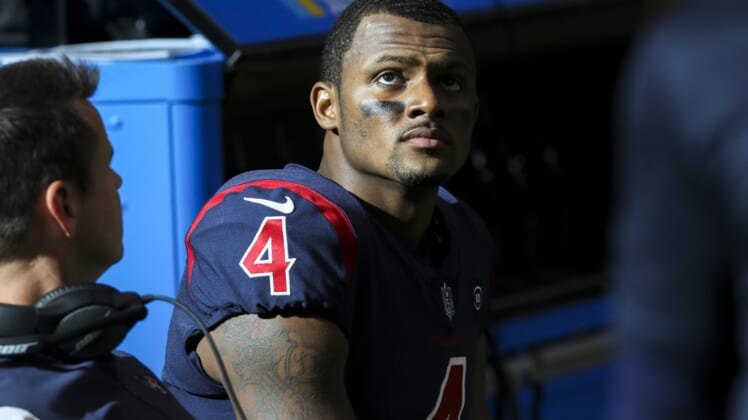 Deshaun Watson wants nothing more than for the Houston Texans to trade him. One of the NFL’s biggest stars made it known that he intends to never play for the organization again. Now, it seems the Texans are prepared to challenge him on that.

The rift between the 25-year-old quarterback and the Texans reached new levels early in the offseason. Team owner Cal McNair reportedly promised that he would receive input on the search for a general manager and head coach. Instead, McNair ignored the recommendation of the search firm he hired and chose Nick Caserio for the role. After Watson learned about the hiring on social media, the same way he was informed of the infamous DeAndre Hopkins trade, trust with the Texans’ organization was lost for good.

With the situation in Houston getting worse, a trade seemed inevitable. As the latest trade rumor indicates, though, both sides seem to be digging in their heels even more.

NFL rumors: Houston Texans will let Deshaun Watson sit out 2021 instead of trading him

In January, reports first surfaced that Watson was prepared to sit out the 2021 NFL season. Since then, former teammates and additional reporting have made it clear the Pro Bowl quarterback is willing to take the Carson Palmer route to force a trade. It seems the Texans are willing to let that happen.

ESPN’s Dan Graziano reported Friday on Get Up that the Texans are willing to let Watson sit out the entire season, recouping his salary and signing bonus. The organization remains adamantly opposed to trading him and is digging in its heels just as much as the franchise quarterback.

After signing a $156 million contract extension last year, Watson might have to forfeit $20.2 million if he sits out the entire summer and 17-game season. He will receive $50,000 daily fines for each training camp he skips this summer, refusing to play also means sacrificing his game checks and Houston can go after him for his signing bonus.

Plenty of teams would love to change things. The Miami Dolphins, Carolina Panthers, New York Jets and Chicago Bears have all pursued blockbuster trades for Watson. But the Texans aren’t even picking up the phone and Caserio is leaving rival general managers with no choice but proposing their offer via voice mail.

Watson recently met with head coach David Culley, a Zoom session that reaffirmed his desire to never play for the team again. While his issues are tied directly to McNair and executive Jack Easterby, the MVP-caliber quarterback isn’t going to be swayed by a coach he has a brief relationship with from the Pro Bowl.

Right now, no one in the league expects the Texans to budge. So, barring a sudden change, Deshaun Watson will not take the field in 2021 and the Texans will be the worst team in the NFL.