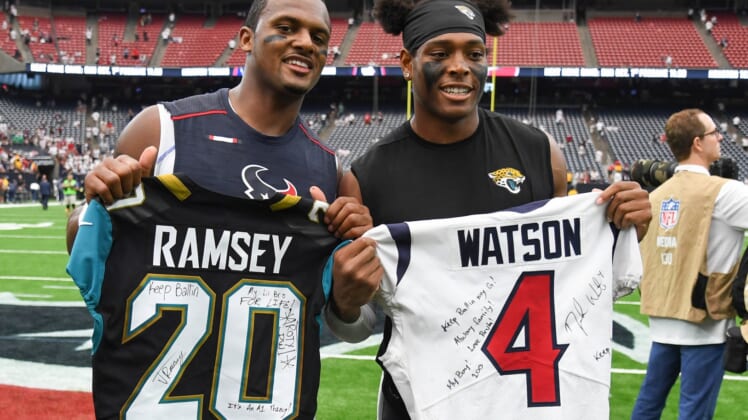 Los Angeles Rams cornerback Jalen Ramsey used to square off against Houston Texans quarterback Deshaun Watson rather often when he played for Jacksonville in the AFC South.

But beyond that competitive familiarity, Ramsey and Watson share the same agent, David Mulugheta, so it’s worth listening when Ramsey says something about the star quarterback’s future outlook.

In an interview on the Huddle and Flow podcast, Ramsey shared his belief that Watson will continue to spurn Houston until he forces his way out of town, per Steve Wyche:

Linking out to all the stories, rumors and chatter about Watson’s displeasure with the Texans organization and how he wants out would make any reader’s head spin.

Suffice it to say, Watson wants out, and Ramsey is reaffirming the NFL’s most notable open secret of the offseason.

If anyone knows the value of forcing his way out of a horrendous football operation, it’s Ramsey. He made it clear to the Jaguars that he wanted out, and got his wish, joining the Rams in 2019. In his first full year in Los Angeles last season, Ramsey was named a first-team All-Pro as part of the NFL’s No. 1 defense.

This is similar to the vision Watson probably has for himself after leading the NFL in passing yards in 2020, only to see his team go 4-12.

You can bet Ramsey is privy to what’s going on with Watson, more so than many media members, because of his shared agent situation.

A multitude of reports suggest Watson is definitely digging in and will categorically refuse to play for the Texans going forward. What’s mind-boggling is new Houston general manager Nick Caserio’s refusal to even entertain trade offers or take calls.

Watson has made his position clear. He’s told anyone near his orbit who will listen, and even Texans head coach David Culley to his face, that he’s done with the franchise.

Caserio hails from the New England Patriots’ personnel department. If there’s a common thread between the vast majority of coaches and members of the house that Tom Brady and Bill Belichick built who leave, it’s that they take after some of Belichick’s stubbornness, and unequivocally believe it’ll translate to their new team.

Well, playing hardball with Watson is about the dumbest thing Caserio could do right now to begin his tenure. Alas, it’s precisely what he’s doing, and the longer he waits to deal Watson away for a king’s ransom of draft capital and possibly even a star player or two, the more difficult it is for the Texans to move toward fielding a competitive team.

If it comes to Watson sitting out regular-season games, which he’s apparently willing to do, his value is going to tank even more. Instead of flexing muscles and trying to establish oneself as the new boss in town, perhaps Caserio should swallow some pride, pick up the phone, and make a Watson trade happen.

Think about it this way: Houston has no scenario in which it is even remotely a good team in 2021 with Watson not playing. The front office has nary a first- or second-round pick to work with in the 2021 NFL Draft. Watson’s gigantic cap hit limits what the Texans can do to build out the rest of their roster.

Rather than being delusional and trying to salvage a clearly lost relationship with Watson, Caserio could be hailed as a hero for making a trade with someone like the New York Jets or Miami Dolphins, who own the second and third overall picks in the draft respectively.

In addition to landing a haul of draft picks, Houston could have either a top quarterback prospect, or try to build around a cheap, young signal-caller in New York’s Sam Darnold or Miami’s Tua Tagovailoa.

This saga still has many more chapters that’ll be written about it. The hope is Caserio comes to his senses sooner rather than later. If they wait too long for Watson to come around — and he won’t — the Texans will clown themselves.