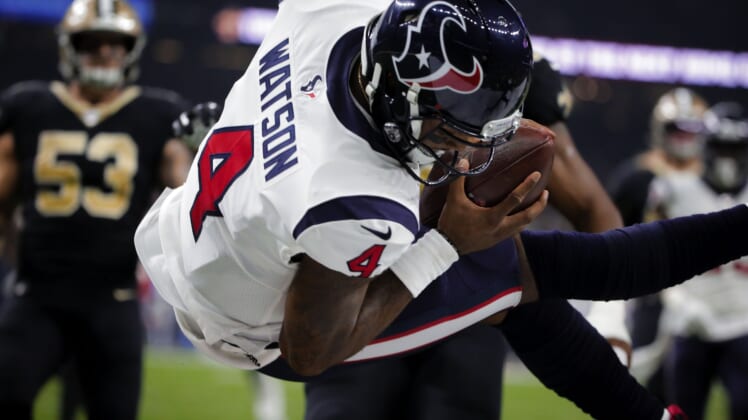 Deshaun Watson and the Houston Texans remain in a stalemate over the star quarterback’s trade demand, with no end seemingly in sight for this feud. While Houston refuses to cave right now, even amid their franchise player’s threats, a blockbuster deal could come with little notice.

The 25-year-old is increasingly frustrated with the organization. First, the franchise gave away star receiver and close friend DeAndre Hopkins and didn’t inform the quarterback until the news broke on Twitter. Then, owner Cal McNair reportedly backed out on his promise to give Watson input in prospective candidates for head coach and general manager.

A toxic situation has seemingly gotten worse as each week passes. Watson asked for a trade in January, but new general manager Nick Caserio is refusing to move him and won’t even respond to calls from other teams. While both sides continue to play hardball, there might be a new development on the trade front.

The Texans hired Caserio away from the New England Patriots, where he worked for years as Bill Belichick’s top executive. He recognizes the importance a star quarterback has and the ramifications that might come if his first move is granting a star’s trade demand. But there’s also another intriguing element at play.

Deshaun Watson: 5 teams who are a perfect fit for Houston Texans QB

Sports Illustrated’s Albert Breer, who covered the Patriots for years, spoke to multiple executives familiar with Caserio. They said their expectation was, if Caserio finally caves, a deal would happen quietly and suddenly. The Texans wouldn’t shop Watson around the league, but would take offers quietly and quickly agree to a deal.

Houston remains adamant that it won’t move Watson, confident it can repair this damaged relationship. Given the organization’s recent moves have made things worse and a Zoom meeting with head coach David Culley solidified Watson’s desire to leave, this partnership seems destined to fail.

Related: Miami Dolphins reportedly expect to be ‘in the mix’ for Deshaun Watson trade

The Texans are also trying to gain leverage over other clubs, driving up the price for a potential blockbuster trade. While Caserio would need Watson’s approval thanks to a no-trade clause, the Pro Bowl quarterback is also desperate to get out of Houston.

Watson does reportedly have preferred landing spots, but they match up with clubs who both have the draft capital to land him and want to acquire an MVP-caliber quarterback.

This saga is certainly going to play out much longer, with the 2021 NFL Draft likely the first soft deadline to monitor. Without first- or second-round picks, Houston desperately needs capital to begin its rebuild. They can get that from the New York Jets (No. 2 overall pick, multiple 2021 and 2022 first-round picks) and Miami Dolphins (No. 3 and No. 18 picks).

While a blockbuster trade still feels unlikely for the time being, it’s clear that this situation could change and a historic deal could come together in an instant.