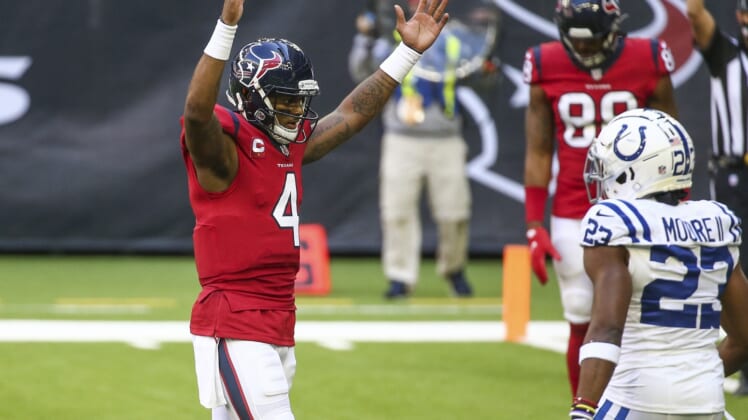 The Miami Dolphins are ready to strike the moment the situation arises. If the Houston Texans finally relent, granting Deshaun Watson a trade, expect the Dolphins to be one of the first teams calling about the superstar quarterback.

It shouldn’t come as a surprise. The moment Houston had a problem, trade speculation began. The 25-year-old star isn’t on speaking terms with the Texans, seeking a trade to almost any other team. Given how rare it is for an MVP-caliber quarterback on a long-term contract becomes available, the price to acquire him would be through the roof. But, thanks to Miami’s war chest of draft picks, it always seemed like the perfect landing spot.

According to the Miami Herald‘s Barry Jackson, team sources indicated the Dolphins expect to be in the mix for Deshaun Watson if the Texans make him available for trade.

The Dolphins are among Watson’s preferred destinations. It would allow him to play for a stable organization that is quickly climbing into relevance and he could partner with some familiar faces. While Miami spent the No. 5 overall pick on Tua Tagovailoa, the organization likely recognizes there could be an unprecedented opportunity this offseason.

With Watson added to this team, the Dolphins become a Super Bowl contender in 2022. They have one of the NFL’s best defenses and showed a lot of promise despite inconsistent quarterback play last season. With an All-Pro talent at the position, Miami could soar in the AFC.

For now, the Texans aren’t even considering a trade. Despite reports that the situation is getting worse and he isn’t responding to the team’s calls, Houston is convinced it can salvage the relationship with Watson. Meanwhile, he is seemingly prepared to sit out training camp and the 2021 season, insisting that he will never play another snap for this club.

This saga isn’t over, but Watson and his agent will certainly look for opportunities to force Houston’s hand. The first key date is the 2021 NFL Draft. Miami can put together a package featuring Tagovailoa, the No. 3 overall pick and the No. 18 selection. It would give the Texans premium draft picks and a quarterback to build around.

Even if things don’t change by draft day, Miami can still puts itself in a good position for a trade. Another team will likely want to trade up for the No. 3 pick, jumping over others to draft one of the top quarterbacks. In a trade-down scenario, the Dolphins could acquire multiple 2022 draft picks. With that, the team could still send a worthwhile offer to Houston.

The Miami Dolphins don’t have to trade for Deshaun Watson to be a playoff contender next season. But if this organization wants to challenge the Buffalo Bills and Kansas City Chiefs, competing for a title every year, Watson gives them the best chance to do that.