The Miami Dolphins draft picks changed after two big trades, but even after moving from third to sixth in the 2021 NFL Draft, they're still in a great spot. 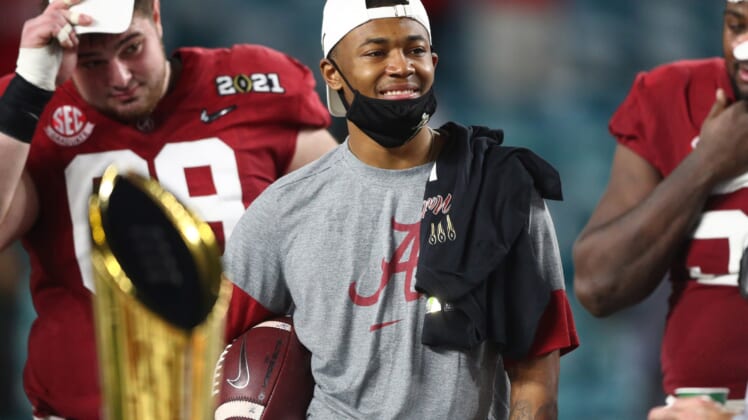 The Miami Dolphins wield a lot of power in the 2021 NFL Draft, with the Nos. 6 and 18 overall picks, two second-round selections and another choice at 82nd overall.

That’s quite a package of assets, and thanks to a pair of trades with the San Francisco 49ers and Philadelphia Eagles, Miami has collected even more assets to build a powerhouse team around young quarterback Tua Tagovailoa.

Let’s take a look at who the Dolphins should be targeting in an ideal world in our three-round mock draft, which turns out to be an absolute dream scenario for Tagovailoa that Miami could absolutely pull off if the desire is there to do so.

What more do you need to know? After practice at the Senior Bowl, Smith spoke directly about his conversations with Tagovailoa and their potential NFL reunion.

Once upon a time, Smith caught the game-winning touchdown pass from Tagovailoa in the national championship game against Georgia. Although Smith was overshadowed by other first-round draft picks at Alabama throughout his time there, he made the wise decision to return for his senior season in Tuscaloosa.

The result? Smith won the Heisman Trophy, and led the Crimson Tide to yet another national title.

No matter the stage, and despite Smith’s lackluster size compared to general NFL standards, all he does is beat his man at the catch point. He’s a sensational route-runner who can already make sight adjustments with his quarterback and knows how to attack any kind of defense.

Perhaps Ja’Marr Chase is tempting if he’s there, but Smith’s history with Tagovailoa makes this a no-brainer pick for Miami. If, for some reason, he’s not on the board still, there’s always the option of taking Sewell and either kicking him inside to guard or putting him at either tackle spot.

Given the public commitment the Dolphins seem to have made to Tagovailoa, though, nothing would be more indicative of that support than bringing Smith aboard.

Before getting to yet another former Alabama player, let’s address Bateman. This would be an obvious choice if the Dolphins trade for either Russell Wilson or Deshaun Watson. That seems like the only scenario in which Miami would give up on Tagovailoa at this point, so say Wilson or Watson to Miami happens.

Then, Bateman becomes the No. 1 target here. In fact, the Fins may need to decide between the Golden Gophers star and LSU standout Terrace Marshall Jr., and it’s probably a coin flip as to who will be the better pro. Since Bateman is a little more physical at the catch point and gives the QB a slightly larger margin for error, he gets the edge.

But in all likelihood, Smith is going off the board to Miami, so he and DeVante Parker, along with free-agent addition Will Fuller and tight end Mike Gesicki, will be enough for Tagovailoa or Wilson or Watson to work with.

What the Dolphins do lack is a dynamic, game-changing tailback, which Harris absolutely is. At 6-foot-2 and 230 pounds, the bruising ball-carrier has breakaway speed, freakish athleticism and pass-catching ability to be an instant-impact workhorse at the NFL level. He had 30 touchdowns this past season for the Tide. Thirty. Oh, and Harris is very familiar with Tagovailoa, too.

If Miami head coach Brian Flores wants to further build out his defense with this pick instead and convinces the front office to take him up on that, Collins is a versatile front seven chess piece who can drop in coverage, rush the passer and defend the run. Flores’ complex, multifaceted system is an ideal fit for Collins’ all-around skill set.

Unclear what Dickerson’s outlook is for the 2021 season due to the knee injury he suffered that kept him out of the national title game but for the final snap. However, if he’s ready to roll as an NFL rookie or takes just a few games to get cleared for game action, he’d be well worth the investment near the top of Round 2.

Dickerson would be an upgrade at center or guard over any of the Dolphins’ incumbent linemen. Plus, yes, the added perk that he was a college teammate of Tagovailoa’s as well. Isn’t it great that the personnel needs, caliber of prospects and happenstance familiarity with the franchise quarterback seem to be aligning for all these Miami draft targets?

Again, Flores is probably not going to want to see the Fins go all offense in the draft with all the picks the team has, so maybe Moses or Phillips is deemed a better fit. Moses is the latest quality linebacker to hail from coach Nick Saban’s NFL factory, and even though he’s still got a ways to go developmentally, he has every tool Flores would want to flourish in Miami’s scheme.

Phillips wouldn’t have to go far to his NFL destination if he’s still on the board here. However, given the premium placed on edge rushers and the fact that the Dolphins are decently deep at that spot, he’d either be less of a priority or already off the board. Nevertheless, the upside is there, and teams can never have enough pass rushers.

Four Alabama players in the top 50, all to the Dolphins? Maybe crazier things haven’t happened in NFL Draft history, but does it really seem so far-fetched?

Leatherwood is quick enough on his feet to play right tackle, and he thrived in that role for the Crimson Tide. While he’s probably better suited to play guard in the pros, Leatherwood is the type of mauler who can bring some serious attitude to Miami’s currently uninspiring rushing attack.

On the other hand, adding someone like McNeill to a defensive line that already has some promising young cornerstones in Raekwon Davis and Christian Wilkins is another appealing option. McNeill can play nose tackle, but even at 315 pounds, he’s got the suddenness and short-area burst to play the 3-technique. This man can move.

McNeill would give Flores and the coaching staff a lot of flexibility and keep offenses guessing as to what sort of stunts Miami will pull off on any given down.

In the event Harris isn’t the choice at 18th, Williams is a phenomenal secondary option. With a thickly-built 5-foot-10, 220-pound frame, Williams just doesn’t go down upon first contact. He’s adept as a pass-catcher and averaged 7.3 yards per carry in 2020 en route to 1,140 yards and 19 touchdowns on only 157 carries.

Read More: The case for, and against, Miami Dolphins committing to Tua Tagovailoa as franchise QB

In 21 games at UAB, Smith amassed 89 total tackles (23.5 tackles for loss), 12.5 sacks and three forced fumbles. His length at 6-foot-7 is a serious problem for offensive tackles to deal with, and even though he played lesser competition in college, the numbers don’t lie.

Pro Football Focus rated Smith as the country’s No. 5 edge defender in 2019, and he followed that up by ranking 16th out of 378 qualifiers this past season. Not often do players from a less-heralded program like UAB enter the NFL Draft early, but Smith justifies it, because his skill set, if he lands in the right spot, translates very well to the NFL. Smith is already making an impression against the best prospects at the Senior Bowl.

For similar reasons that McNeill is an attractive target at No. 50, Tuipulotu gets squarely on the radar here. The USC product started for three years, showed off strong interior pass-rushing ability and could align anywhere across Miami’s front and make an impact. Tuipulotu’s 46 total tackles from 2019 are a testament to his relentless motor and how well he can diagnose plays.

Finally, there’s Collins. If you remember from the 2020 draft, the Cleveland Browns landed Donovan Peoples-Jones in the sixth round, and he had a big impact as a first-year pro. Collins won’t fall that far, but a similar story could emerge around him. After playing for less-than-stellar quarterback with the Wolverines, Collins could well shine in the NFL with a better passer throwing him the ball.

The 6-foot-4 Collins has a huge catch radius, yet is also very explosive, evident in his 19.7 yards per catch from his junior campaign. He opted out of the 2020 season, so there’s a chance Collins will continue to be somewhat overlooked. He’s an early Day 2 talent who could still be on the board later in the third round. He’d be an appealing outside receiving threat opposite Parker in Miami.

What better way to put Tagovailoa at ease and reaffirm the effort to maximize his talents than by drafting three of his former teammates to join him in Miami?

It’s not just a sentimental thing, an outlandish mock scenario to draw attention, or an entirely unrealistic proposition, either. There’s a very strong chance Smith will be available at No. 3, that Harris will be the first ball-carrier off the board at 18th, and that Dickerson, due to his injury situation, being free to draft at 36th.

In fact, it may turn out that McNeill’s stock soars to the point where the Dolphins take him near the top of Round 2, and then pivot to either Dickerson or Leatherwood at 50th overall.

What’s great about Miami’s situation is the franchise is way ahead of the curve in its ongoing rebuild. Should the Fins emerge with a draft class like this, headlined by a trio of studs from college football’s preeminent powerhouse program, it’ll likely ensure the offense takes a giant leap forward in 2021.