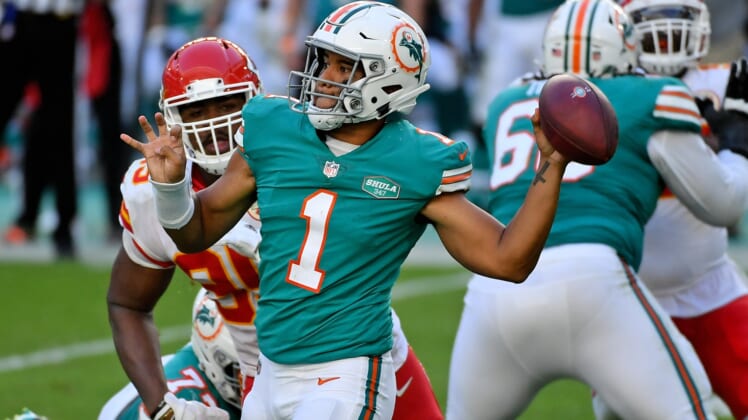 There has been some talk following an up-and-down rookie season that the Miami Dolphins could very well move off former top-five pick, quarterback Tua Tagovailoa.

There’s a lot of layers to this situation for the Dolphins. One of the primary reasons talk has surrounded Tua being one-and-done in South Beach is the fact that Miami boasts the No. 3 overall pick in the 2021 NFL Draft from the Houston Texans. Either Justin Fields (Ohio State) or Zach Wilson (BYU) will be on the board with that selection.

Even then, the idea of moving on from a quarterback that they had targeted for nearly two years ahead of the 2020 NFL Draft never really seemed to make much sense. Apparently, the Dolphins agree.

“A lot of attention gets paid to Tua, but I thought he made a lot of improvement over the course of the season. I’m excited about the future with him,” Flores said Thursday, via Cameron Wolfe of ESPN. “He’s a young player, talented player, bounced back from the hip. I think this is a big offseason for him. That Year 1 to Year 2 jump will be important like it is for all rookies.”

This makes perfect sense. Despite the success we saw from fellow rookie quarterbacks Justin Herbert and Joe Burrow during the 2020 season, players at this position were behind the proverbial eight-ball.

The COVID-19 pandemic forced off-season activities to go fully virtual. There were no preseason games to be had. And as for Tagovailoa, the quarterback was coming off a serious hip injury he suffered during the 2019 season with Alabama.

Even with all of those issues in the forefront, Tagovailoa was still able to post a 6-3 record in nine starts while tallying 14 total touchdowns against five interceptions. Sure a late-season benching for veteran Ryan Fitzpatrick was not a great look. But it’s hard to even analyze a rookie quarterback in just nine games. That’s especially true when it comes to the above-mentioned COVID-related issues.

Coming off a tremendous 10-win season, these Miami Dolphins are in a tremendous position moving forward. Boasting the No. 3 overall pick and an additional second-round selection from Houston adds another layer to that.

Rather than going quarterback in the top five for the second consecutive year, it makes sense for Miami to engage in trade-down talks for the third pick with other teams who are in need of help under center.

At least for now, it seems like Flores is sold on Tua moving forward into his sophomore campaign. That can’t be seen as a bad thing for fans in Miami.

Click below for more Miami Dolphins news and rumors.