The Miami Dolphins pulled off their second 2021 NFL Draft trade of the day with the Philadelphia Eagles. Now who will each team target in the first round? 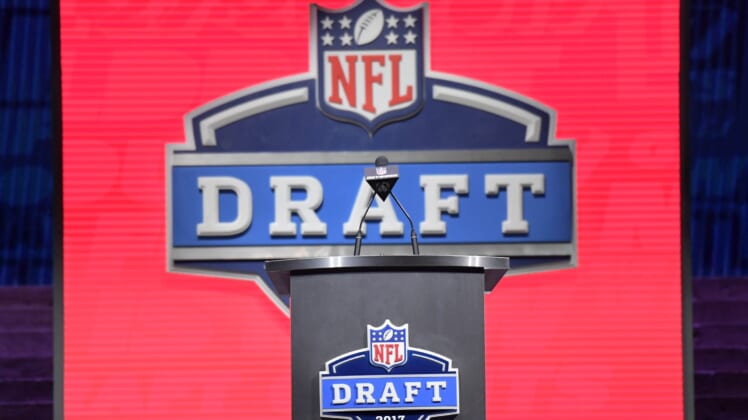 Apr 27, 2017; Philadelphia, PA, USA; The podium with draft logo at the first round of the 2017 NFL Draft at the Philadelphia Museum of Art. Mandatory Credit: Kirby Lee-USA TODAY Sports

The Philadelphia Eagles made a pair of pick swaps and earned an additional first-rounder in next year’s NFL Draft in a big trade with the Miami Dolphins on Friday.

Mere minutes after news broke that the Dolphins traded down from third to 12th overall with the San Francisco 49ers, the 2021 NFL Draft got even more eventful with this Philly-Miami swap.

Let’s take a closer look at what this deal means for both teams, and who each might target with their first-round picks.

Miami Dolphins target with the No. 6 overall pick

Presumably, Miami’s plan all along was to take the best pass-catcher available at third overall and build around second-year quarterback Tua Tagovailoa.

After the trades with San Francisco and Philadelphia, the Dolphins gained some extra assets and still get to do what they would have anyway if they had just stayed put at No. 3.

It stands to reason that Jacksonville, the New York Jets and the 49ers will all take QBs in the top three, and the Atlanta Falcons may pick one in the fourth spot since Matt Ryan isn’t getting any younger and his contract cost is prohibitive going forward.

The Cincinnati Bengals have been linked to Penei Sewell, so the opportunity is there for the Dolphins to add a dynamic weapon to their passing attack.

Florida tight end Kyle Pitts is a matchup nightmare, and LSU wideout Ja’Marr Chase is a phenomenal prospect whose stock hasn’t been at all impacted by his decision to opt out of the 2020 campaign. They’d both be fine selections for the Fins.

All that said, it’s hard not to think that Miami won’t reunite Tagovailoa with his former Alabama teammate and reigning Heisman Trophy winner DeVonta Smith.

Other than his diminutive frame, there’s no real knock on Smith’s game. He was absolutely unstoppable this past season en route to 117 receptions, 1,856 yards and 23 touchdown grabs. He helped the Crimson Tide win a national championship. The last time Smith did that, he hauled in a game-winning TD from Tagovailoa.

Between Pitts, Chase, Smith and another Alabama receiving star in Jaylen Waddle, the Dolphins can’t go wrong. right now, our prediction is that Smith gets the nod.

For the Eagles to make this deal, all indications are that they’re committed to QB Jalen Hurts at least for the 2021 campaign. Hurts had limited game exposure as a rookie but showed off his dual-threat skill set well enough for Philadelphia to have confidence in his upside. After all, he was a second-round pick in last year’s draft.

Hurts needs some help around him in terms of skill position talent. The Eagles were in prime position to get that for him at sixth overall, but are showing they have an eye toward the future by trading back to No. 12.

Still, there should be a decent pass-catcher available by then. Alabama’s Waddle or Minnesota’s Rashod Bateman make a lot of sense if that’s the direction Philadelphia general manager Howie Roseman chooses to go.

Other areas of need on the Eagles roster include the back seven on defense. They could use a sideline-to-sideline linebacker who can cover, or a legitimate No. 2 cornerback opposite Darius Slay.

Virginia Tech corner Caleb Farley was thought to be the No. 1 prospect until a recent procedure on his back raised medical red flags, per Pro Football Network. Farley’s slight fall might wind up being the Eagles’ gain if his back checks out OK. The next man up figures to be Patrick Surtain II, yet another Alabama player, but he’s liable to be off the board by the time the Iggles go on the clock.

Look for someone like South Carolina standout Jaycee Horn to be squarely on Philly’s radar if Surtain isn’t there. Otherwise, a playmaking linebacker like Notre Dame’s Jeremiah Owusu-Koramoah or Penn State’s Micah Parsons could be the primary target.