The San Francisco 49ers took the NFL by storm in trading up to third overall in the 2021 draft. Which dominoes will fall next after this blockbuster deal? 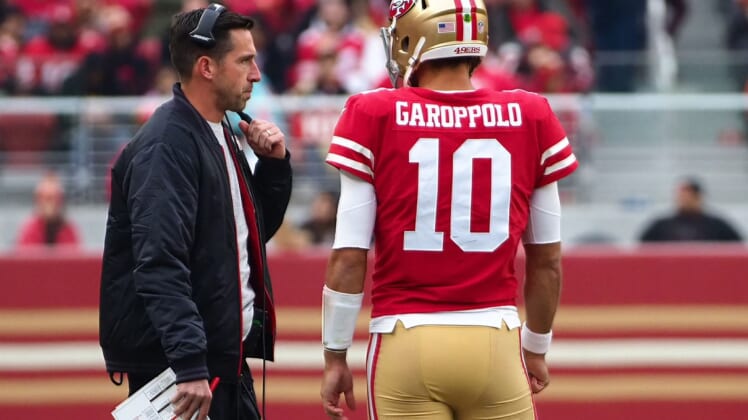 The San Francisco 49ers made one of the biggest moves in recent NFL history on Friday by trading up from 12th to third overall in the 2021 NFL Draft, sacrificing a huge haul to the Miami Dolphins to do so.

This is an obvious indication that the 49ers are determined to upgrade their quarterback position from Jimmy Garoppolo. Meanwhile, Miami gets a ton of assets to continue its rebuild off a 10-win season.

Now that this deal is out in the world, let’s take a look at the three likeliest moves to follow in the aftermath of this mind-boggling deal.

The presumption is that Clemson’s Trevor Lawrence will go first overall to the Jacksonville Jaguars, and there’s reportedly a strong chance that the New York Jets take BYU signal-caller Zach Wilson with the second pick in the 2021 NFL Draft.

It’s unclear who San Francisco may prefer, or if general manager John Lynch might shock the world and take someone like Mac Jones from Alabama. In all likelihood, though, it’s probably between Fields and Lance, because both are superior athletes with stronger arms and present a higher ceiling than Jones does.

Fields indubitably comes from the superior college program. He’s been on the big stage for the Buckeyes on numerous occasions and delivered some epic performances, including a playoff triumph over Clemson in which he tossed six touchdowns.

Meanwhile, Lance has only one year of starting experience under his belt to Fields’ two, but what a spectacular 2019 campaign it was. Lance ran for 1,100 yards and 14 touchdowns that year and threw 28 TDs to zero interceptions. He only turns 21 in May.

Do the 49ers really want to hitch their wagons to a rookie quarterback in 2021? Because of the awkward situation this creates for Garoppolo, it certainly seems that way. There ought to be some growing pains as either Fields or Lance adjust to Shanahan’s complex system, yet it’s also a QB-friendly offense with heavy play-action.

Because Lance is the younger prospect and already has more experience in a pro-style offense, don’t be shocked if he gets the nod over Fields. Whether it’s Lance or Fields, though, Shanahan hasn’t had as much raw QB talent to work with since he was the offensive coordinator in Washington for Robert Griffin III.

Both Lance and Fields are arguably better prospects than Griffin was coming out in 2012, and RGIII was drafted second overall.

So yes, there’s a slim possibility Garoppolo sticks around to serve as a bridge starter in the Bay Area, but more likely, he’ll want to go somewhere he’s appreciated and believed in. Obviously, this 49ers mega trade with the Dolphins shows the organization has zero faith in Garoppolo to be the long-term answer.

It’s been speculated that Garoppolo is going to wind up back with the team that drafted him in the first place to be Tom Brady‘s heir apparent.

The New England Patriots re-signed Cam Newton this offseason, and while he could take a huge step forward in their offense in Year 2 with far better skill position talent flanking him, Garoppolo is the man head coach Bill Belichick always wanted once the TB12 era was over.

Per Over the Cap, releasing or trading Garoppolo would save the 49ers $23.6 million in salary cap room. There’s little reason to keep him around at this point, and San Francisco will have little leverage in trading for him, as interested teams are bound to simply await his release instead of giving up compensation.

This one’s a little more off the wall, but think about it: That 49ers-Dolphins trade package noticeably omitted any mention of San Francisco’s second-round pick.

If the goal is to win now and build a loaded roster around a young QB while he’s on a rookie contract, the cap space that’s freed up by letting Garoppolo go can be utilized to bring Odell Beckham Jr. into the fold.

The 49ers have a couple promising young wideouts in Deebo Samuel and Brandon Aiyuk, but no real depth to speak of behind them.

Beckham has not had the best of times in his two seasons with Cleveland. He played through injuries for all of 2019 and required offseason surgery, and then tore his ACL this past season.

But with the Browns’ run-first offense not really requiring or making the most of Beckham’s playmaking talents, why wouldn’t San Francisco try to get him?

Yes, there’s a little bit of overpaying going on here in terms of draft compensation: A 2021 second-round pick and 2022 third-rounder. What better way to ignite a passing attack than by acquiring a legitimate No. 1 receiver with everything to prove who’s been unable to get on the same page with Baker Mayfield in Cleveland?

This may sound crazy on the surface. Bear in mind, however, that the 49ers were interested in trading for Beckham before he went to the Browns. The New York Giants reportedly wanted to include the Niners’ second overall pick they used on star pass-rusher Nick Bosa, but San Francisco declined.

The asking price for Beckham will still be pretty high, yet it’d make sense for Cleveland to move on from him at this point and for the 49ers to get the guy they wanted in the first place years ago to be their go-to receiver.