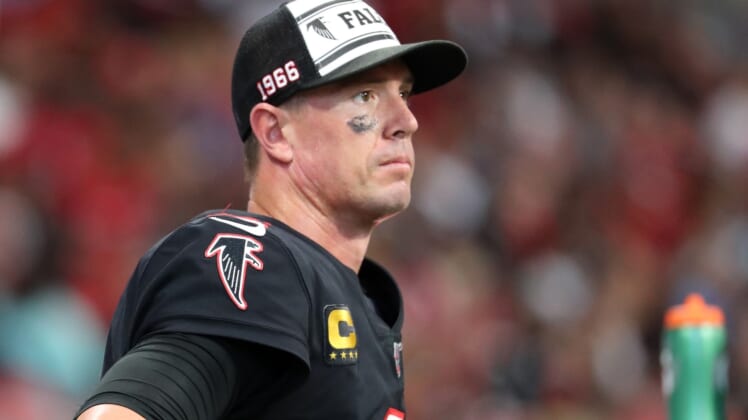 The Atlanta Falcons restructured longtime quarterback Matt Ryan‘s contract this offseason, but that doesn’t mean they won’t go for his eventual successor with the fourth overall pick in the 2021 NFL Draft.

By decreasing Ryan’s salary cap hit for 2021, Atlanta has actually painted itself into something of a corner — even if the NFL cap soars in 2022 as expected.

Jeff Schultz of The Athletic reported on Wednesday what the thinking was regarding Ryan’s future among Atlanta’s new leadership of general manager Terry Fontenot and head coach Arthur Smith:

“A source said Fontenot believed he had no other viable options and that this decision does not necessarily change the Falcons’ thinking on drafting a quarterback with the fourth overall pick or sometime early in this draft. Fontenot and new coach Arthur Smith both have acknowledged the need to prepare for Ryan’s and Julio Jones’ exit.”

Ryan turns 36 in May and has hardly been the problem with the Falcons’ on-field product of late. In recent years, it’s been more the defense’s fault, and that’s part of the reason Smith’s predecessor, Dan Quinn, was ultimately let go.

But even as Atlanta has kicked the can time and again with Ryan’s contract — this marks the fourth time he’s restructured — the team still finds baffling ways to lose and hasn’t made the playoffs in the past three seasons.

According to Over the Cap, Matty Ice is due to be an astronomical $48.6 million salary cap hit in 2022. Trading him after June 1 of this year would result in $2 million in cap savings, or $23.75 million on the same date next year. That isn’t ideal for setting up Ryan’s next stop, though.

With receiver Calvin Ridley likely next in line for a big contract, it makes little sense to keep Ryan on for that much money. What all this points to is an eventual trade centered around Ryan, and it means the Falcons could definitely draft his successor in the first round of the 2021 NFL Draft.

Defensive needs abound for Fontenot, and it’s likely the new Atlanta GM realizes this. However, even after observing so many salary cap gymnastics as a member of the New Orleans Saints’ front office, Fontenot must also realize how unsustainable the situation is that he’s inherited.

Given that Smith was chosen as the Falcons’ new head coach and thrived as a play-caller in Tennessee with a workhorse tailback in Derrick Henry and a dual-threat QB in Ryan Tannehill, it stands to reason Atlanta will be in the market for a more athletic signal-caller.

For all of Ryan’s passing prowess, he’s a statue in terms of mobility and is a pure pocket thrower. Atlanta will likely covet a prospect such as Ohio State’s Justin Fields or North Dakota State standout Trey Lance, as both would probably sit for a year behind Ryan before taking the reins in 2022.

What should the Falcons do? Figure out a way to build a winner around Ryan and make one more championship push during his tenure, or hit the reset button, get what they can for him in a trade within the next year or so, and roll with a new-era field general?

This is quickly turning into one of the more fascinating QB situations in the entire league, that’s for sure.