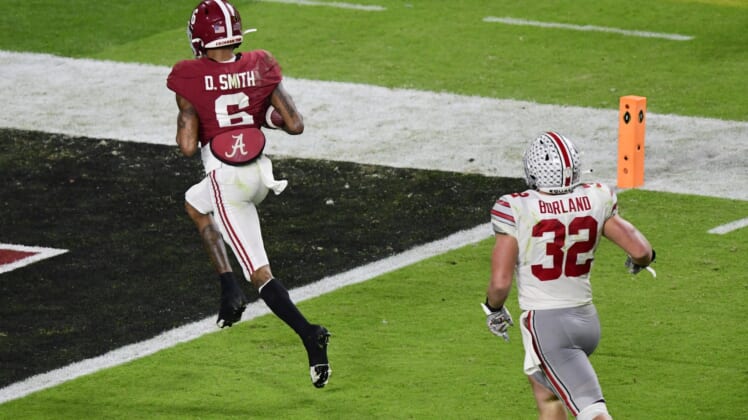 Alabama wide receiver DeVonta Smith is going to cause lifelong nightmares for Ohio State cornerback Shaun Wade. After having made history early in the national championship game Monday night, the Alabama receiver just continued to destroy Wade and the Buckeyes throughout the remainder of the first half.

When the Wade experiment failed, Ohio State figured it made sense to put linebacker Tuf Borland on DeVonta Smith. Yeah, that did not go exceedingly well.

This represented the third first-half touchdown for Smith as his Crimson Tide were rolling an Ohio State team coming off an upset win over the Clemson Tigers.

The Heisman winner dominated in the semifinals against Notre Dame and appears to be back at it again Monday night. It really is something to behold. The pure brilliance in every aspect of his game. The hands. The explosiveness. The route-running. Smith is going to be a force in the NFL for years to come.

Related: Why DeVonta Smith is going to be an NFL star

Obviously, those watching Smith’s performance for Alabama in the first half on Monday night had their reactions.