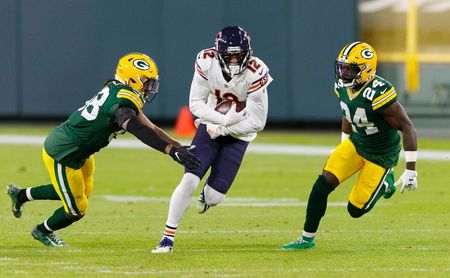 Barring a trade for Deshaun Watson, Tua Tagovailoa will be under center in South Beach next season. It has led to Miami Dolphins rumors suggesting that they need major upgrades at wide receiver.

Despite putting up a surprising 10-6 record last season, Miami has multiple holes to fill at receiver. DeVante Parker led the team with 63 receptions and 793 yards. But he’s been an injury-plagued enigma for the Dolphins over the years. After that, Jakeem Grant was second among Dolphins receivers in catches with 36.

Boasting two first-round picks and two second-round picks, there’s a good chance Miami adds a couple receivers in the draft. However, there’s another expectation that the Dolphins will also add a couple veteran receivers during NFL free agency.

“The Miami Dolphins know they need receiver help and hope to add multiple players – through the draft and likely in free agency – over the coming months, players that are expected to be in the mix for significant roles,” Barry Jackson of the Miami Herald noted recently.

Realistically, there could be four or five new receivers as part of the Dolphins’ pass-catching crew next season. That includes more help in the slot despite the presence of both Grant and Lynn Bowden Jr.

Marvin Jones of the Detroit Lions and longtime Indianapolis Colts receiver T.Y. Hilton are two players who are reportedly interested in joining the Dolphins this offseason.

Jones, 30, has been one of the most-underrated receivers in the game during his career. Despite playing for a bad Lions team a season ago, he recorded 76 receptions for 978 yards and nine touchdowns.

On the other hand, Hilton has fallen on hard times recently. The four-time Pro Bowler is averaging just 631 yards over the past two seasons after putting up 1,000-yard campaigns in five of his previous six seasons. A product of Florida International, joining the Dolphins would be a homecoming of sorts for Hilton.

With that said, the biggest prize is stud Chicago Bears wide receiver Allen Robinson. The 27-year-old pass catcher seemingly won’t be back with Chicago next season. He recorded a whopping 102 receptions for 1,250 yards and six touchdowns a season ago.

This is no small thing to look at when it comes to free agents interested in joining the up-and-coming Dolphins. Coming off a 10-win season and boasting $31.68 million in cap room before some salary casualties take place, Miami has the money to add top-end free agents. The team can save north of $24 million by releasing the likes of Kyle Van Noy, Emmanuel Ogbah and Bobby McCain — freeing up more money to chase after receivers.

Obviously, Deshaun Watson would be even more of a draw for receivers in free agency should the Dolphins be able to pull off a blockbuster trade for the Houston Texans star.

Miami is seen as one of the favorites to land Watson should Houston bite the bullet and trade the disgruntled quarterback. Much like what we saw with Tom Brady and the Buccaneers last offseason, it could have a trickle-down effect with other star players wanting to join Watson in Miami.