NFL rumors: Desperation could lead to Chicago Bears pulling off blockbuster trade for a quarterback 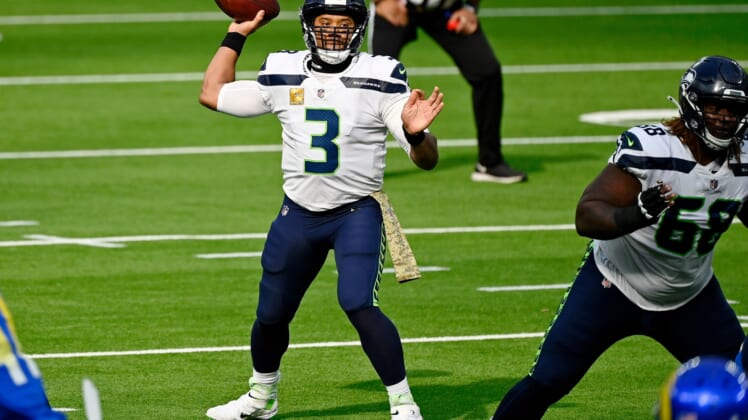 NFL rumors continue to link the Chicago Bears to pretty much every available quarterback on both the free agent and trade markets. Most recently, that includes reports that general manager Ryan Pace and Co. could throw the kitchen sink at the Seattle Seahawks in an attempt to trade for Russell Wilson.

Chicago was also linked to Carson Wentz before his trade from the Philadelphia Eagles to the Indianapolis Colts. Meanwhile, it is one of the teams primarily linked to Houston Texans signal caller Deshaun Watson. What does this all mean? Pace and head coach Matt Nagy are feeling the pressure. They know adding a top-end quarterback to the mix has to be in the cards this offseason.

Feeling of desperation as Chicago Bears seek out a quarterback

“There is a real sense of panic in that building,” an unnamed NFL executive told CBS Sports’ Jason La Canfora. “Don’t underestimate how desperate they are.”

This can’t be considered too much of a surprise. NFL rumors suggested during the 2020 season that both Pace and Nagy were on the hot seat. It was not until a late-season run to the playoffs that both retained their jobs. However, their standing in Chicago is going to be based primarily on how the brass handles the quarterback situation this offseason.

“Sources said they are prepared to throw a boatload of picks at the Texans — for Deshaun Watson — and Seahawks — for Russell Wilson — in an attempt to upgrade at the most important position in all of professional sports,” La Canfora noted. “They are beyond serious and, as is generally the case when job security is at the fore, future picks in like 2023 don’t hold all that much value in real time.”

Indeed, what do picks years down the road mean to Chicago’s brass if they are not going to be with the organization at that point? In terms of the targets, Chicago has apparently placed a higher value on acquiring Russell Wilson over Deshaun Watson. However, a lot of that could have to do with the Houston Texans refusing to take trade calls about their star quarterback.

“The Bears are looking to upgrade in a big way. And there are only so many ways to do that,” La Canfora reported. “If the 49ers land someone like Sam Darnold from the Jets — something being viewed in league circles as a very real possibility — then Jimmy Garoppolo is another name to watch, with the Illinois native homecoming making sense for all parties?

San Francisco joins Chicago and other teams as a potential landing spot for Deshaun Watson. However, the team is said to be interested in New York Jets quarterback Sam Darnold. If something of that ilk were to happen, Jimmy Garoppolo would become available.

Sure he’s not anywhere near the same caliber as Watson or Wilson, but the Super Bowl quarterback would be a marked upgrade over Mitchell Trubisky. He’d also come on the cheap. Whether Pace and Nagy are willing to rely on Garoppolo to save their careers in Chicago remains to be seen.

What we do know here is that NFL rumors will continue to link the Chicago Bears to pretty much every big name available on the market. It could lead to another team sensing panic and bamboozling the Bears in a trade.