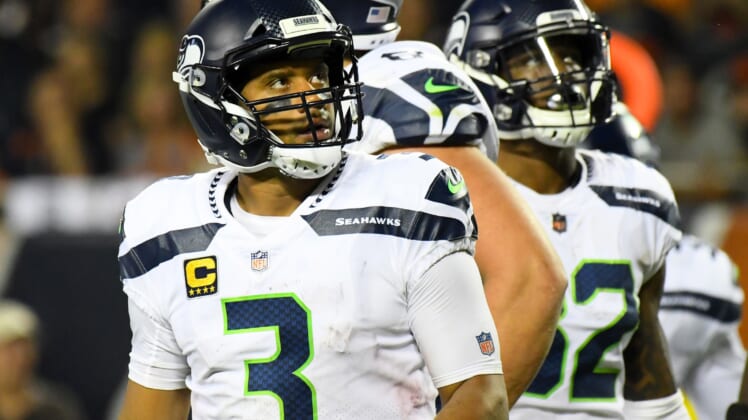 The Chicago Bears could instantly solve their deplorable quarterback situation by acquiring Russell Wilson in a blockbuster trade with the Seattle Seahawks.

While just about any cost could justify bringing the superstar signal-caller aboard, what might a hypothetical trade look like?

Considering Wilson featured Chicago among his list of preferred destinations submitted to the Seahawks, let’s look at the latest rumors and speculation surrounding Wilson’s potential move to the Windy City, and what the Bears’ 2021 outlook would be with him under center.

The inciting incident for all this chaos came from The Athletic’s extensive report on how Wilson’s relationship with Seattle is fracturing, as head coach Pete Carroll has a stark difference of philosophy in how he wants to run the team’s offense.

ESPN insider Adam Schefter reported Wilson didn’t request a trade formally, but submitted a list of teams he’d consider in the event he was dealt away. Those included the Bears.

Seldom does it happen that a quarterback of Wilson’s caliber becomes available in a trade. Since Chicago has been dealing with draft bust Mitchell Trubisky and saw Nick Foles flop as a highly anticipated trade acquisition from last offseason, general manager Ryan Pace should do all he can to land Wilson.

Brad Biggs of the Chicago Tribune wrote a column that floated the idea of the Bears offering their next three first-round picks in exchange for Wilson. He also featured a quote from a source who spoke about why Wilson would want to land with Chicago.

“He’d want to go to a place like (Chicago) figuring he could get a couple players to come with him and then do what Tom Brady did in Tampa — win a Super Bowl,” said a source Biggs spoke to.

There’s also this nugget that suggests Pace and the front office are doing everything they can to make a Wilson deal happen:

Considering how valuable Wilson is, though, it’d probably take those three first-rounders and an established player or two to have Seattle even listen to an offer.

There have reportedly been more than 10 teams who’ve already broached the possibility of a Wilson trade, and it probably wouldn’t take a ton of convincing for the star to waive his no-trade clause if it meant going to a competitive team and leaving Seattle.

In other words, prospective suitors are bound to wildly overpay for Wilson, so the Bears will need to do better than three first-round picks in all likelihood.

Here’s some more insider info gleaned from NBC Sports’ Peter King as to why Wilson is really considering a move to Chicago:

Jimmy Graham is a good friend of Wilson’s, and he’s told him good things about the team and the city. Wilson loves the sporting zeal of the city, the love for the Cubs, the love for the Bears, and might look at it like, Chicago hasn’t had a lot of great quarterbacks, and I could be one. Maybe I could be the missing piece, and how crazy would Chicago go if the Bears ever got great again? And I think he loves the city.

Peter King on Russell Wilson to the Bears

Given the steep cost the Bears would incur to acquire Wilson, let’s see how they could manage the 2021 campaign with Wilson after walking through our best hypothetical trade scenario.

We rolled with the proposed three first-rounders scenario, but tacked on two quality defenders entering contract years in Hicks and Fuller. The former is more of a 3-4 defensive end, yet Hicks has the skill set to thrive as a defensive tackle in Seattle’s preferred based 4-3 alignment.

Fuller fills a need at cornerback for the Seahawks, and gives them greater flexibility at that position with their incumbent No. 1 Shaquill Griffin hitting free agency.

With nose tackle Eddie Goldman returning for the Bears in 2021 after opting out of last season, Hicks’ absence won’t be as noticeable in the trenches if he were to leave for Seattle. Mario Edwards Jr. also graded as Pro Football Focus’ No. 3 interior defender in 2020, and should want to return to the system where he had so much success even though he’s a free agent.

Sacrificing Fuller in a trade further challenges Chicago’s thin secondary depth, yet parting with Fuller and Hicks would save the Bears $21.5 million in cap space and offer more flexibility to mold the roster around Wilson. The Bears would still have stud pass-rusher Khalil Mack, Goldman and dynamic linebacker Roquan Smith to anchor the front seven in any event, plus Pro Bowler Eddie Jackson leading the defensive backfield at safety.

David Montgomery went off for 354 yards rushing in three December victories that helped Chicago into the postseason. Montgomery did this with lackluster QB play. Imagine what he’d do with Wilson opening up the offense.

That’s not even to mention how Wilson could get existing players to buy in to restructuring contracts and get potentially departing veterans to stick around for a championship push. Other stars would even entertain pay cuts to join the cause, as was the case when Brady helped bring in players like Leonard Fournette and Antonio Brown to Tampa Bay as the Buccaneers went on a run to Super Bowl LV glory.

Chicago will also keep most of its improved offensive line intact, and the arrival of Wilson would likely mean the Bears persuade star receiver Allen Robinson to stay put on a long-term contract.

As long as Montgomery continues his late 2020 form, Robinson sticks around and the defense still plays up to snuff, Chicago would be able to challenge Green Bay for NFC North supremacy in 2021 with Wilson in the fold.

Talk of a Super Bowl run wouldn’t be unfounded either, as the Bears already have a top-10 defense to match up with Aaron Rodgers and the Packers. Wilson is the missing piece that could lead to a Lombardi Trophy and ultimately save the legacies of Pace and Chicago head coach Matt Nagy.