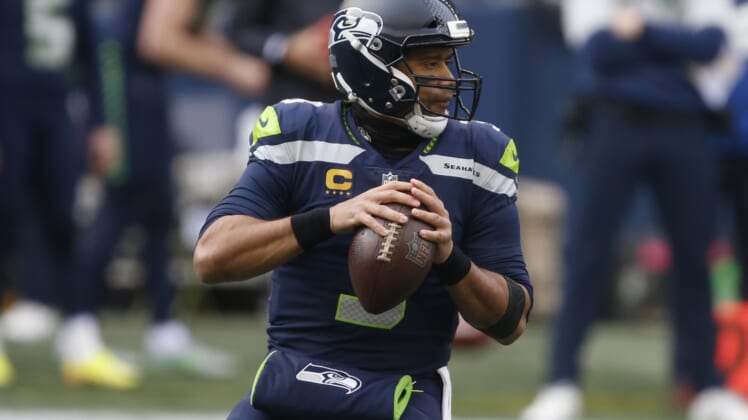 Russell Wilson and the Seattle Seahawks organization may well have reached an impasse if the latest NFL rumors are to be believed.

According to an in-depth report published on Thursday, Wilson’s camp has gone to the Seahawks brass and named teams he’d accept a trade to.

Michael-Shawn Dugar, Mike Sando and Jayson Jenks of The Athletic did a deep dive on Wilson’s fracturing relationship with Seattle head coach Pete Carroll and their difference in philosophies on offense.

Part of this report featured a bombshell about Wilson’s precarious future with the team as a result of his frustration that the Seahawks haven’t played in the NFC Championship Game since the 2014 season:

“[Wilson’s] camp has broached potential trade destinations with the Seahawks. According to sources, those teams include […] the Dolphins, Jets, Saints and Raiders. Some people around the league think a trade could happen, if not this offseason then sometime in the near future.”

Wilson got off to a hot start during the 2020 campaign and was leading the race for MVP honors, largely due to Seattle allowing him to air it out more often than he ever had in his career to that point.

Once the Seahawks’ defense began to hit their stride in the second half of the season, though, offensive coordinator Brian Schottenheimer and Carroll decided to go back to their run-heavy, conservative schematics. This caused the passing attack to suffer, Wilson’s production to fall off, and ultimately made the offense too predictable.

The result? Seattle got shut down by the NFC West rival Los Angeles Rams in a 30-20 loss on Super Wild Card Weekend. Schottenheimer got fired, but Carroll is still of the belief that the Seahawks’ running game — not Wilson’s extraordinary talents as a passer — and a stout defense will be the formula that delivers Seattle its next Super Bowl.

After nine seasons without missing a start and taking numerous hits behind a perpetually porous offensive line, Wilson wants more of a say in the direction his team takes in the prime of his career. That may not happen with the Seahawks, and there are sure to be plenty of teams willing to give Wilson free rein to let it rip.

The New Orleans Saints stand out among the preferred teams Wilson floated that he’s least likely to go to. They do have a great organizational culture and a strong head coach with a bright offensive mind in Sean Payton, yet they have the NFL’s worst salary cap situation and are in no position to acquire him.

The New York Jets and Miami Dolphins have the second and third picks respectively in the 2021 NFL Draft. Since the Seahawks could be in the market to rebuild around a new quarterback if Wilson is traded, they’d have to consider dealing their superstar signal-caller to one of those two places. Plus, neither the Dolphins nor the Jets are in the NFC, which makes those destinations all the more appealing.

Although there could still be other trade suitors Wilson listed as his preferred choices that weren’t included in Thursday’s report, it’s frankly a little odd the Las Vegas Raiders are on there. They play in the AFC West, which features the likes of Patrick Mahomes and Justin Herbert already in the division.

Nevertheless, imagine Wilson, Mahomes and Herbert in the same division, with their teams playing one another twice a year for the next decade. Talk about some seriously entertaining football and high-level quarterback play. Just about every one of those games would have to be reserved for prime-time TV slots.

There’s no question New York has the best cap situation among the named teams to take on Wilson and pay him on his next contract. It’d be ironic, too, if the Jets pulled off the blockbuster Wilson trade, considering they dealt star safety Jamal Adams to Seattle for multiple first-round picks, including a selection in this year’s draft.

But Miami could offer the Seahawks Tua Tagovailoa and a top-three 2021 pick, not to mention the state of Florida wouldn’t require Wilson to pay income taxes.

Dallas picks high enough up in the draft (top 10) for Seattle to potentially consider a deal with the Cowboys, and Dak Prescott could also be used as a trade chip. Chicago has a stout defense, but little else other than a bigger media market that’d appeal to Wilson at least as the team stands right now.

While the Dolphins and Jets are expected to be big players in the Deshaun Watson sweepstakes, they could definitely focus their attention on landing Wilson if he does wind up being available to acquire.