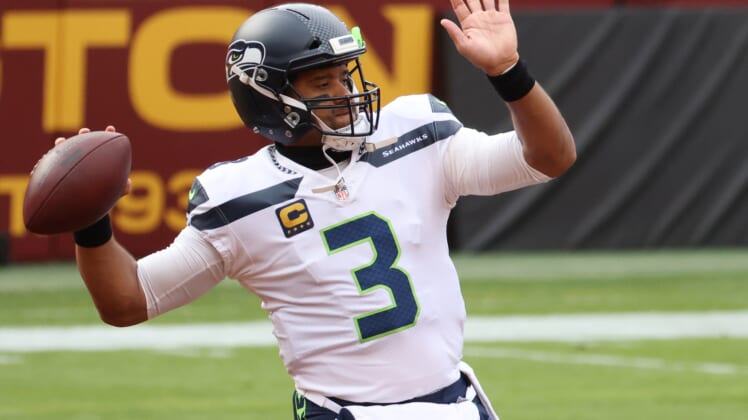 Russell Wilson isn’t happy about the lack of help around him in recent years and the Seattle Seahawks aren’t pleased their franchise quarterback is going public with the problems. Unsurprisingly, NFL teams are taking notice and doing whatever they can to force a trade.

The 2021 NFL quarterback carousel is already off to a wild start this offseason, featuring Matthew Stafford and Jared Goff swapping teams. More moves are expected. Carson Wentz and Sam Darnold are both on the trade block this spring, while Deshaun Watson is doing everything he can to free himself from the Houston Texans.

With general managers desperate to upgrade at the quarterback position, every possible option is being explored. After getting turned down by the Green Bay Packers for Aaron Rodgers, NFL clubs are now making a run at Russell Wilson.

Latest news on the future of Russell Wilson with Seattle Seahawks

Wilson ruffled some feathers recently in Seattle during a recent interview. The eight-time Pro Bowl selection voiced his displeasure with the number of hits he has taken in recent years, expressing a desire for the situation to vastly improve.

Related: Are the Seattle Seahawks about to swing a Russell Wilson trade and implode?

The Seahawks didn’t take it well. While the team has rejected inquiries from other general managers this offseason, the organization took issue with Wilson calling out the team’s problems publicly. It sparked further speculation that, if the right offer came along, Wilson could potentially be traded by Seattle.

According to Pro Football Talk’s Mike Florio, Wilson is not seeking a trade and likely wants to see how the organization addresses the team’s needs this offseason. The relationship between the franchise and its star quarterback is fluid, but a split isn’t expected this year.

While the Seahawks might not have liked their future Hall of Fame quarterback calling out the offensive line, he made a fair point. Wilson has suffered 40-plus sacks in each of the last eight seasons. Even outside of his running plays, he is among the most hit quarterbacks in the NFL. Between the sacks, tackles and hits after releasing the football, Seattle’s 5-foot-11 quarterback takes a beating every game.

Despite all of that, he continues to post stellar numbers. He threw a career-high 40 touchdown passes and completed 68.8% of his passes this past season. Wilson also recorded 4,212 passing yards, posted a 105.1 quarterback rating and went 12-4 as the starter. With Wilson under center, Seattle boasts a 98-45-1 record and the team has three consecutive double-digit win seasons.

It’s a virtual certainty that Wilson isn’t traded in 2021, especially since moving him would leave a $39 million cap hit this year. With that said, a trade in the future is possible. The Seahawks reportedly offered him for the No. 1 overall pick before the 2018 NFL Draft. If things don’t work out in 2021, both sides might want to part ways.