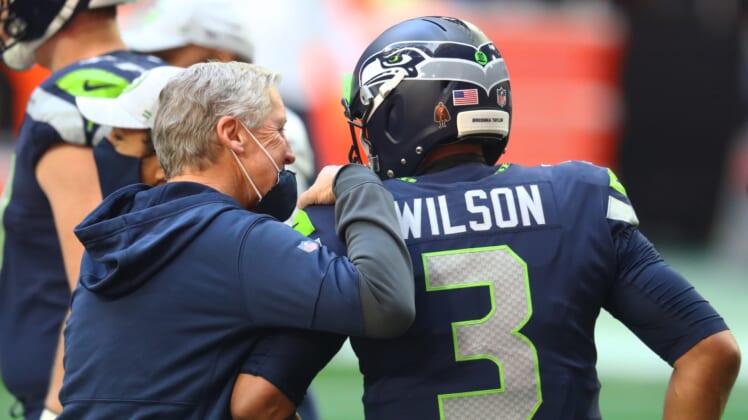 Seattle is coming off another disappointing season, one that saw its offense collapse late in the year. Changes have already been made with the play-calling for the 2021 season, but more upheaval is expected as the offseason unfolds. As Wilson begins to become more vocal about his issues with some of the team’s issues in recent years, the 32-year-old star could be starting a feud that might inevitably end in this partnership coming to an end.

Seattle Seahawks management unhappy with Russell Wilson for speaking out

Russell Wilson appeared on the Dan Patrick Show Tuesday and expressed his frustration with Seattle’s current situation. The Super Bowl champion and eight-time Pro Bowl quarterback specifically brought up that he has grown tired of getting hit so much.

Related: Are the Seattle Seahawks about to swing a Russell Wilson trade and implode?

The comments raised eyebrows across the league, leading to more teams calling the Seahawks about a potential trade. While those inquiries have been rejected, Patrick shared on his show Thursday that Wilson’s decision to go public and his criticisms bothered the organization. Furthermore, it led to some questioning if Wilson’s days in Seattle are numbered.

Wilson has routinely been one of the most sacked quarterbacks in the NFL. He was taken down for 47 sacks in 2020 and took a league-high 48 sacks in 2019. Even more alarming, he has suffered 40-plus sacks in each of the last eight seasons. This doesn’t even account for the times he was hit after releasing the football or when he kept it on a run.

Read More: Are the Seattle Seahawks too dependent on Russell Wilson heading into 2021 and beyond?

The Seahawks went 6-3 the rest of the way, with the defense carrying much of the weight. Wilson had just a 14-7 TD-INT ratio, took 28 sacks, posted a 91.8 passer rating and his completion rate fell to 66.5% in nine games.

Quarterback-needy teams started reaching out to Seattle this offseason. While landing Russell Wilson seems like a long shot, this is the same front office that reportedly offered him for the No. 1 overall pick in the 2018 NFL Draft.

While the Seahawks might not like it, this is an era when quarterbacks are becoming more vocal about the issues within an organization. Deshaun Watson wants out amid the alarming organizational issues in Houston and Carson Wentz is extremely unhappy in Philadelphia. Even Aaron Rodgers has expressed uncertainty about his future with the Green Bay Packers and some in that organization want him gone.

If the Seahawks aren’t willing to put a team around Russell Wilson that he trusts, there’s a chance the star quarterback could force a trade at some point. He likely stays with Seattle in 2021, but his future beyond that seems uncertain.