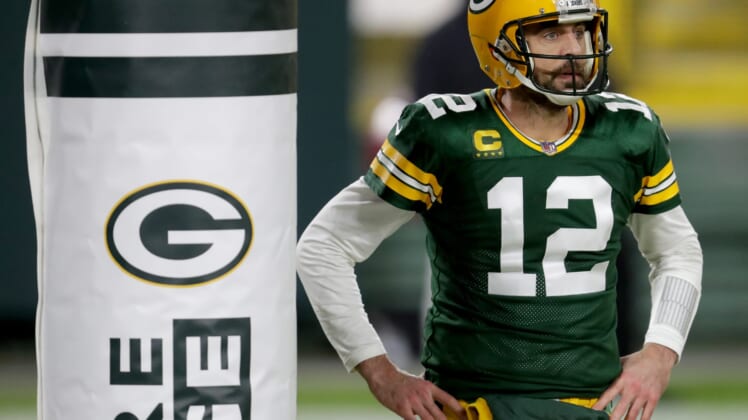 Green Bay Packers star Aaron Rodgers sparked trade speculation after the team’s NFC Championship Game loss by pondering his uncertain future with the team. Amid growing rumors about his feelings toward the organization and a potential desire to play elsewhere, some in Green Bay might share the sentiment.

Packers general manager Brian Gutekunst shocked the NFL world by trading up for quarterback Jordan Love in the 2020 NFL Draft. Coming off an NFC championship defeat to the San Francisco 49ers, Green Bay seemingly dedicated its offseason to preparation for a future without Rodgers.

The future Hall of Famer responded with the best season in his career, likely resulting in NFL MVP honors. But after falling short of the Super Bowl once again, with glaring holes that weren’t addressed in the draft hurting the Packers, Green Bay’s situation seems tenuous.

Since Aaron Rodgers expressed some uncertainty about his future with the Packers, many around the organization made it clear they want him back. Following Sunday’s loss, head coach Matt LaFleur made it emphatically clear that he wants Rodgers back and the team needs its leader for next season.

That feeling is shared by the locker room and likely reflects how the entire coaching staff feels about its quarterback. However, ESPN’s Adam Schefter cast some doubt during an appearance on Get Up about how the front office might feel regarding Rodgers’ future.

Publicly, Packers CEO Mark Murphy said he wanted Rodgers back and the team would be idiots to consider moving on from him. However, it’s worth considering the very move this organization made a year ago and the rumors that came out after that selection.

The buzz around Green Bay preparing to move on from Rodgers started in February 2020. Information came out that he was likely playing on his last contract with the team. Just two months later, chatter around the 2020 NFL Draft hinted at Green Bay looking into options for his successor.

After trading up in the first round, despite no other teams trying to jump them, rumors suggested the Packers drafted Love to spite Rodgers. The groundwork was seemingly being laid to start getting everyone more comfortable with the idea of Green Bay moving on from its legendary quarterback.

Rodgers responded to the challenge. He set career-highs in completion rate (70.7%), passing touchdowns (48) and touchdown rate (9.1%). He finished with an NFL-best 121.5 quarterback rating and averaged 9.6 yards per attempt, proving that he is still one of the best players in the NFL.

Meanwhile, Love has struggled. With the COVID-19 pandemic wiping out rookie camp, he couldn’t work with coaches until training camp. When he arrived, the rookie quarterback made erratic throws, struggled to adjust to the NFL and he never showed signs of even being ready to challenge Tim Boyle for the No. 2 quarterback spot.

Many believed Rodgers’ return to MVP status extended Green Bay’s Super Bowl contention window. For that to happen, though, it will require navigating a difficult salary cap situation and dedicating the 2021 NFL Draft to addressing holes that were ignored last offseason.

Brian Gutekunst and the Packers could trade Love and take a win-now approach this spring. It’s the same route the Tampa Bay Buccaneers, New Orleans Saints and Kansas City Chiefs are taking. However, it seems Green Bay is still focused on preparing for a future without Rodgers.

That end result might come much sooner than they anticipated. If Rodgers determines the organization isn’t willing to make win-now moves and doesn’t believe in him, he could ask for a trade. In that scenario, Gutekunst’s massive bet on Love will be tested and the Packers will have burned a bridge with a second Hall of Fame quarterback.