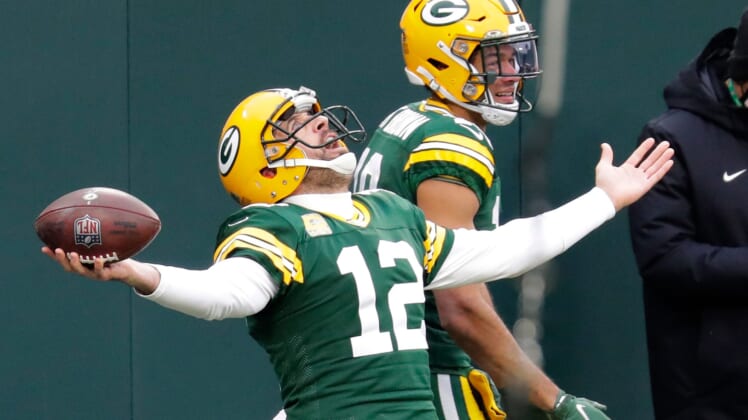 Coming into the 2020 NFL season, speculation was building about Aaron Rodgers’ future with the Green Bay Packers. For a team that looked like its Super Bowl window was closing, Rodgers’ resurgence this year might extend Green Bay’s window of contention.

After shocking the NFL world by trading up and drafting quarterback Jordan Love in the 2020 NFL Draft, many started counting down the days until the Packers traded Aaron Rodgers. With the future Hall of Famer facing uncertainty in Green Bay, rumors suggested he could be traded within the year.

It added greater uncertainty around a team still reeling from its NFC Championship Game loss, with glaring holes on both sides of the ball that weren’t addressed. But ever since the NFL’s regular season kicked off, Rodgers and the Green Bay Packers are proving that No. 12 might have a lot more left in the tank.

Rodgers turned his anger over Love’s selection, just as his teammates predicted. While the two-time NFL MVP and eight-time Pro Bowl selection wasn’t bad in 2019, posting a 26/4 TD/INT ratio with a 95.4 quarterback rating, he didn’t play to his usual standard. Rodgers has silenced the skeptics this season for those who wrote off the 37-year-old quarterback as being in evident decline.

It started in Week 1, facing the Minnesota Vikings and defensive guru Mike Zimmer. Against a coach who usually has his number, Rodgers racked up four touchdowns with 364 passing yards and a 127.5 quarterback rating. It was a sign of things to come, with Rodgers returning to his MVP-caliber form and the Green Bay Packers rolling to a 4-0 record.

Everything came crashing down against the Tampa Bay Buccaneers. After jumping out to a 10-lead, a rare pick-six gifted new life to Tampa Bay’s defense. On the next drive, a pass bounced off the receiver’s hands and turned into an interception that set up another touchdown. Rodgers completed just 45.7% of his passes, throwing two interceptions with a 35,4 quarterback rating in a 38-10 loss.

While the Green Bay Packers haven’t been perfect since then, going 6-2 over an eight-game stretch, Rodgers has been practically unstoppable. He surged past Russell Wilson in the NFL MVP race and now in a close battle with Patrick Mahomes, thanks to a phenomenal sequence.

In his age-37 season, Rodgers is playing like the NFL’s best quarterback. He grades as Pro Football Focus’ top passer in 2020 (94.9), thriving in every aspect of being a signal-caller.

Keep in mind, Rodgers hasn’t had a healthy offense around him this season. Davante Adams and Aaron Jones each missed two games. Meanwhile. No. 2 receiver Allen Lazard was sidelined six games with a core muscle injury. On top of that, standout offensive lineman David Bakhtiari and Corey Linsley have each missed significant time.

The Packers are NFC North champions once again and have a great shot at earning the No. 1 seed in the NFC. Rodgers’ play gives this team a shot to not only win Super Bowl LV, but to compete for championships for the next several years. While it’s rare for quarterbacks to maintain elite play into their 40s, Rodgers seems like the next great (Tom Brady, Drew Brees) who can accomplish it. It’s huge for this team, but this defense is still standing in the way of the Green Bay Packers reaching the next level.

When Raheem Mostert gashed Green Bay’s defense for 220 rushing yards and four touchdowns in a humiliating 37-20 NFC Championship Game loss, many expected defensive coordinator Mike Pettine to be fired. Instead, Matt LaFleur brought him back for the 2020 season.

After keeping, the next focus shifted to how general manager Brian Gutekunst would address the team’s glaring needs at linebacker and along the defensive line. Faced with a loaded class of free agents and a deep 2020 NFL Draft class, Gutekunst basically ignored the Green Bay Packers’ biggest needs.

Unsurprisingly, Green Bay’s defense hasn’t improved in 2020. The Packers allow the sixth-highest yards per carry (4.6), the 10th-highest passing touchdown rate (5.3%) and are in the bottom half of the NFL in pressure rate (21.9%).

A lack of personnel in the front seven is an undeniable problem. An even bigger issue, Pettine’s inability to make adjustments to what his opponent is doing. Against good offensive minds, he is often take to school. That’s a big problem in an NFC playoff field with Sean McVay, Sean Payton and Bruce Arians. Even average play-callers with great offensive talent (Arizona Cardinals, Seattle Seahawks) could take advantage of Pettine’s defense in the playoffs.

Barring a Super Bowl victory, Pettine isn’t expected back with the Green Bay Packers in 2021. At that point, LaFleur will have his first chance to pick his own defensive coordinator. While he might have his own guys in mind, there’s a real chance Chuck Pagano, Dan Quinn and Gus Bradley could all be available this offseason.

Once LaFleur finds Green Bay’s next defensive coordinator, the pressure shifts to Gutekunst and how he addresses this team’s roster issues with a complicated salary cap situation.

The COVID-19 pandemic has taken a toll on the NFL, costing the league upwards of $2.7 billion in lost revenue. While owners and the NFL Players Association prepared for this, getting a $175 million floor for the 2021 NFL salary cap, every team will be impacted.

Green Bay is among them, especially with $200 million in committed cap liabilities heading into 2021. Quite simply, difficult decisions will need to be made.

Using Over the Cap’s salary cap calculator, Green Bay is projected to be $24.79 million over a potential $176 million 2021 NFL salary cap. While there is an increasing chance the figure could be higher than $175 million, it won’t exceed anything more than $190 million.

As a result, the Packers will have to move on from several key players this offseason. Of course, that doesn’t include those already on expiring contracts and could leave in free agency. For Green Bay to create $30-plus million in cap space, the following moves could be made.

Related: NFL stars who could be cap casualties in 2021

All of these moves would help Green Bay get under the 2021 NFL salary cap. With that said, there still wouldn’t be enough money to re-sign Corey Linsley, Aaron Jones, Robert Tonyan, Jamaal Williams and Allen Lazard.

Realistically, based on recent reports regarding contract talks with Jones, Green Bay’s top running back won’t return in 2021. The team will also likely be letting No. 2 cornerback Kevin King depart this offseason.

There’s a chance the Packers could fill different holes on the roster by signing veterans who were waived in cap-saving moves. An opportunity to compete for a Super Bowl would be appealing, but the Packers would struggle to lure free agents with less money to spend and little off-field attractions to draw players in.

It will make nailing the 2021 NFL Draft, while getting better contributions from the 2020 draft, essential for the Green Bay Packers.

The Green Bay Packers will have plenty of needs entering the 2021 NFL Draft. Fortunately, this year’s class is deep in several areas this team must address. With the help of The Draft Network’s mock draft simulator, solidifying this roster and strengthening its status as a Super Bowl contender is possible with a strong draft class.

This would definitely be a haul Green Bay would feel great about. Outside the top-10 picks, Owusu-Koramoah might be one of the best defensive fits for the Packers. With him falling, Green Bay’s new defensive coordinator will have a sideline-to-sideline linebacker that will address plenty of this team’s issues.

Surratt, who opted out of the 2020 season, received a little first-round buzz after a strong showing in 2019. With Jamie Newman under center, Surratt hauled in 66 catches for 1,001 receiving yards and 11 scores. At 6-foot-2 with soft hands and the ability to get open deep, he would look good in 3WR sets.

Onwuzurike, a 6-foot-3 defensive tackle, would provide the Packers with some much-needed help on the defensive interior. He could help keep Kenny Clark fresh and help collapse the pocket from the inside.

As of now, the defense is the Green Bay Packers’ Achilles heel. Issues that should have been addressed last offseason were ignored. With Rodgers returning to his MVP-caliber form, though, it’s evident that Gutekunst doesn’t need to spend another offseason preparing for the future.

Instead, the 2021 NFL Draft and spending can be devoted to injecting talent on defense and bringing in a sharp defensive mind who can schematically compete in a challenging NFC. If that happens, with Rodgers and LaFleur even more comfortable together, the Green Bay Packers can keep competing for Super Bowls.