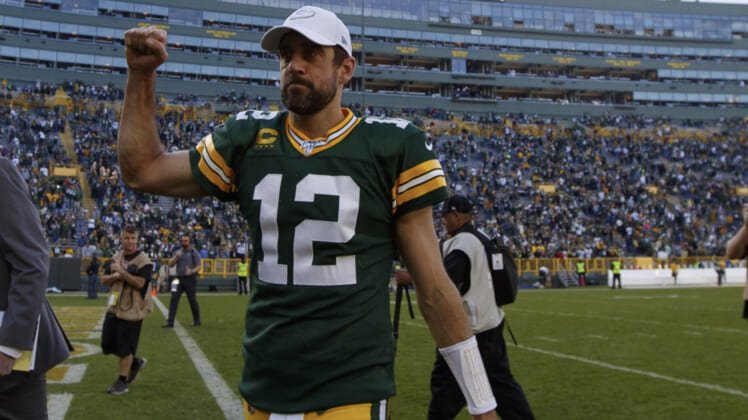 The Green Bay Packers were determined to come away with Jordan Love in the 2020 NFL Draft, trading up to the No. 26 overall pick to land their quarterback of the future. Now, executives around the league are starting to wonder if Love will take over for Rodgers sooner than expected.

While Rodgers will remain Green Bay’s star quarterback for the 2020 season, in part because of his $51 million dead cap hit if he is traded before the season, many around the league believe his time with the Packers could be running out.

In an interview with The Athletic’s Mike Sando, multiple team executives suggested Rodgers might be gone before 2022. In fact, one executive suggested the Packers could begin shopping their future Hall of Fame quarterback next offseason.

“Can you trade him? I would not rule it out after this season,” an NFL executive said, via The Athletic. “I think they will put up with potential problems in 2020, especially now that there may be a whole bunch of weird things happening this year, and they can see how Aaron responds and if they have to ship him out, they have to ship him out. If you look at history, when is the latest that Jordan Love is going to be the starting quarterback for the Packers? I think it is 2022.”

While Packers general manager Brian Gutekunst and head coach Matt LaFleur have come out and expressed confidence in Rodgers staying in Green Bay for years, the reality of the situation tells a different story.

NFL teams rarely allow a quarterback that they spent a first-round pick on to sit for three years with Rodgers being the exception to recent history. Green Bay will almost certainly want to start seeing the return for its investment in Love by the third year of his career.

Many expected the Packers to use the 2020 NFL Draft to surround Rodgers with more talent after he helped push the team to the NFC Championship Game. Instead, the front office seems to be thinking far more about the future.

While it seemed impossible a few weeks ago that the Packers could move on from Rodgers by 2022 in place of an unproven quarterback, that scenario seems to be exactly where this situation is headed.