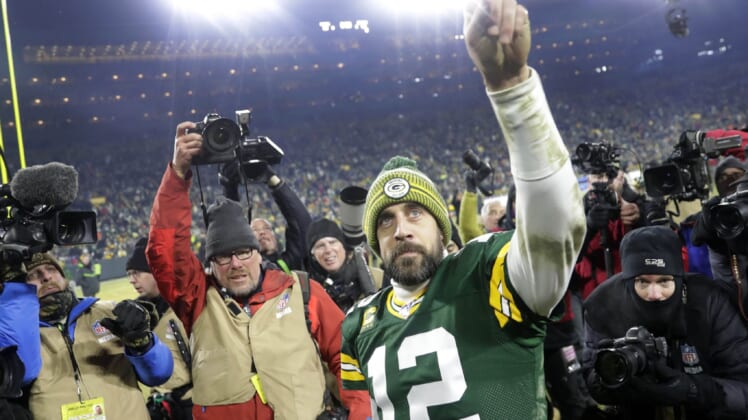 The Green Bay Packers may have just lit a fire under one of the greatest passers of this generation. Aaron Rodgers, who has always played with a massive chip on his shoulder, is still as passionate as ever to play football.

“We were out there running around today on our conditioning day, and the guy’s still got his wheels,” Bakhtiari said. “I’m proud of him on that end. We still compete. I know that fire still burns in him deep. He’s still, in his own way, makes sure he tries and win in every facet. He’s the most competitive person I’ve met. So I always expect the most out of him, because I know he can deliver on that end.”

Famously passed over by almost every first-round team in 2005, Rodgers watched Alex Smith go No. 1 that year. Since then, all he’s done is put up a Hall of Fame-worthy career while winning a Super Bowl and two NFL MVP awards.

Now he has another reason to feel slighted, and for that chip on his shoulder to grow even bigger than ever before.

Packers drafted Jordan Love, shocking Aaron Rodgers and everyone else

Rodgers is still one of the most elite quarterbacks in the NFL today. Most expected the Packers to bolster their roster with wide receivers and offensive line help. Instead, they traded up to No. 26 overall and selected project quarterback Jordan Love. That move stunned everyone, including Rodgers.

Brett Favre, of all people, shared what kind of impact that move had on Rodgers. Favre said that Rodgers was, “let’s just say surprised” about the pick. Favre also said that Rodgers “has every right to be disappointed, if he is.”

For now, the Packers are still Rodgers’ team. And given the extra motivation he has, nobody should be surprised if Rodgers puts up stunning stats and leads Green Bay to big things in 2020.