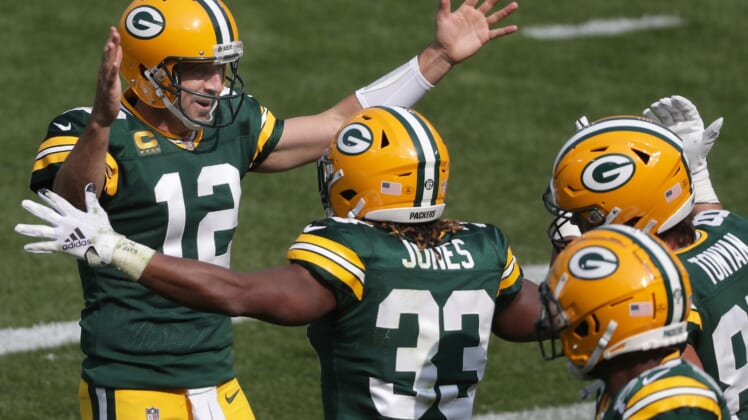 We’re going to hear a lot of Green Bay Packers news this coming offseason when it comes to star running back Aaron Jones. Previous reports suggested that Green Bay would let Jones walk in free agency.

We now have some more information to report. It’s not great news for those who want to see Jones in the yellow and green over the long term.

“Aaron Jones is seeking new representation as he heads into the final month of the season with an expiring contract, sources told ESPN,” Packers insider Rob Demovsky reported Sunday afternoon. “The two sides have been in on-going negotiations but were unable to reach a deal, and now it appears they’re starting over. No paperwork has been filed with NFLPA yet to name a new agent.”

A fifth-round pick of the Packers back in 2017, Jones is playing under a four-year, $2.6 million contract that is set to expire once the new NFL league year begins in March. To say that he’s underpaid would not do it justice.

The former UTEP standout gained 1,558 total yards at a clip of 5.5 yards per touch while leading the NFL with 19 touchdowns from the running back position a season ago. Jones, 26, entered Sunday’s Week 14 action against the Detroit Lions having put up 1,033 total yards in 10 games despite dealing with injuries this season.

It stands to reason that Aaron Jones could be in line for a contract similar to the five-year, $63 million extension Dalvin Cook signed with the division-rival Minnesota Vikings recently. His body of work suggests a huge pay day once free agency starts.

There’s also a chance that Green Bay opts to place the franchise tag on Jones in order to prevent him from hitting free agency. That value would be an average of the five highest-paid running backs in the NFL next season.

However, the economic downturn around the NFL created by the COVID-19 pandemic might prevent a team from taking on such a large cap hit for one season. This means the onus would be on the Packers to get something done ahead of the start of free agency.

Green Bay might have a cheaper alternative in that of fellow 2017 class mate Jamaal Williams, who is also slated to hit free agency come March. The BYU product has played well with Aaron Jones banged up a bit this season, tallying 657 total yards at a clip of 5.0 yards per touch.

These Packers also surprisingly selected former Boston College standout A.J. Dillon in the second round of the 2020 NFL Draft. He’s done very little as a rookie.

Click below for more Green Bay Packers news and rumors