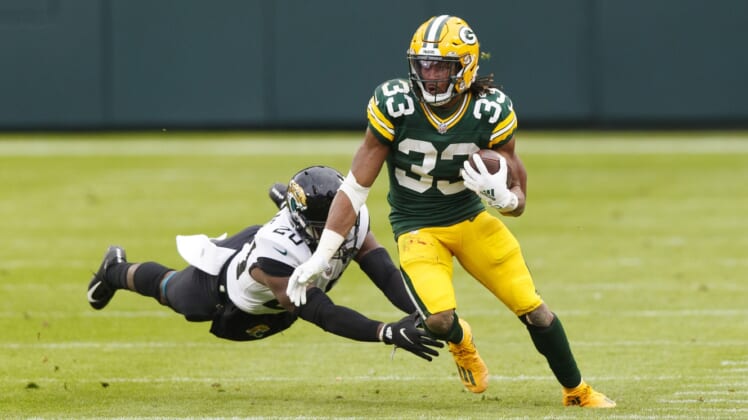 Packers news: The Green Bay Packers dedicated their 2020 NFL draft class to preparing for their future, one that is unlikely to include running back Aaron Jones.

While Jones has missed time with a calf injury this season, he is an integral part of Green Bay’s offense. Unfortunately for many fans, it seems that Jones’ tenure with the Packers will end after the 2020 NFL campaign.

According to ESPN’s Rob Demovsky, the expectation is the Packers will let Jones walk in free agency this offseason. Green Bay anticipates moving on from several key starters next offseason with the NFL salary cap set to drop due to billions of dollars in lost revenue.

The Packers are currently projected to have $200 million in cap liabilities next season, per Over the Cap. With the NFL salary cap expected to be set around $175-185 million, the team will be forced to make cuts.

Jones’ 2017 draft classmate, fellow back Jamaal Williams, is also slated to hit free agency. Both of them were Day 3 draft choices, which goes to show how interchangeable players at the position are. It speaks volumes about what the front office thought of AJ Dillon, who’s a rookie second-rounder and yet to really make his mark as a pro. But if Jones departs in favor of another team, Dillon would be poised to become the team’s featured running back in 2021.

It could be a rough offseason of Packers news for fans hoping to see many familiar and talented staying with the team. Even if the Packers cut edge rusher Preston Smith ($8 million savings), safety Adrian Amos ($4.3 million), offensive tackle Ricky Wagner ($4.25 million), defensive end Dean Lowry ($3.3 million) and kicker Mason Crosby ($2.5 million), it won’t give the organization much room to operate under the cap.

Keep in mind, Green Bay also needs to re-sign center Corey Linsley (PFF’s top-graded center), receiver Allen Lazard and its 2021 draft class. With so much key personnel in play who must be paid, tough decisions will have to be made.