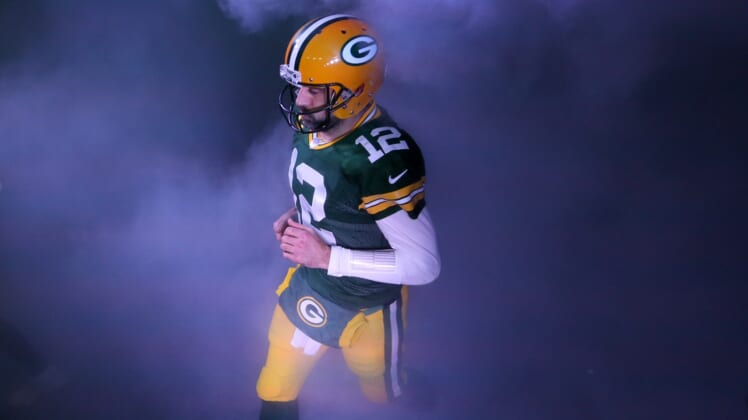 Green Bay Packers quarterback Aaron Rodgers (12) runs on the field before the 32-18 win over the Los Angeles Rams during the NFC divisional playoff game Saturday, Jan. 16, 2021, at Lambeau Field in Green Bay, Wis.

The Green Bay Packers attempted to quiet the storm when it comes to likely NFL MVP Aaron Rodgers following their brutal loss to the Tampa Bay Buccaneers in last weekend’s NFC Championship Game.

“We’re not idiots,” CEO Mark Murphy said earlier in the week. “Aaron Rodgers will be back. He’s our leader.” Those comments seemed to suggest that Green Bay is hellbent on retaining the 37-year-old Rodgers moving forward.

However, there’s one thing lost on all of this. It might not be the Packers’ decision. Coming off the best season of his first-ballot Hall of Fame career, Aaron Rodgers holds all the cards here. He sounded very questionable about his future following yet another loss in the NFC Championship Game.

We’re now hearing a bit more on the Rodgers situation. To say it’s not great for the Packers would be a dramatic understatement.

“How about talking to your quarterback first before you put out that statement, or just waiting to see if he says it for himself?” One longtime executive told Jason La Canfora of CBS Sports. “Totally tone deaf. That’s exactly what not to do. That thing is going to go nuclear. Trust me. The quarterback wants out.”

The unnamed executive was speaking to Murphy’s above-mentioned comments about the Packers retaining Rodgers. Sure the CEO wanted to get out in front of the entire drama. But without talking to Aaron Rodgers, it could create more issues behind the scenes.

In terms of Rodgers potentially wanting out, an assistant coach in the NFL had this to say.

“It’s been the worst kept secret in football. I don’t think they’ve ever really won him over. Last year they held him back, and then they picked his replacement in the draft. This guy is nothing if not calculated. He’s sending a signal to the rest of the league – Come and get me.”

Will an Aaron Rodgers trade happen?

Appearing on The Pat McAfee Show, Rodgers expanded on his comments from Sunday evening that threw the NFL world into an uproar.

“I don’t think that there is any reason why I wouldn’t be back,” Rodgers said (h/t ESPN). “But look, there’s not many absolutes in this business. So to make an absolute statement about something that is not an absolute, I didn’t do it. And I guess that’s why it went kind of nuts.”

Rodgers is a calculated individual. It’s what has helped make him one of the greatest quarterbacks of all-time. Do we honestly believe that he was lost in the passion of the moment following Sunday’s disheartening loss to the Buccaneers? I am not too sure.

What we do know is that the multi-time MVP was not happy after the Packers selected fellow quarterback Jordan Love in the first round of the 2020 NFL Draft. He’s also apparently had issues with head coach Matt LaFleur in their two seasons together.

It seems absolutely foolish to believe that the Packers would even entertain the idea of trading Aaron Rodgers. That’s until we realize it might not be their choice. If these unnamed individuals within the NFL are right, the quarterback can create more problems behind the scenes if he wants out and the Packers fail to oblige.

The 37-year-old Rodgers is coming off a career-best 2020 season that saw him complete 70.7% of his passes for 4,299 yards with 51 total touchdowns against five interceptions en route to leading Green Bay to a 13-3 record.

Obviously, any number of teams would be interested in acquiring Aaron Rodgers should this thing continue to swell behind the scenes. The New England Patriots, Dallas Cowboys, San Francisco 49ers, Las Vegas Raiders and Chicago Bears are just a few of the teams we can list.

With all of that said, this is all smoke right now. Once the fire starts burning out of control in Green Bay, we can talk more about the possibility of an Aaron Rodgers trade. Until then, it’s fun fodder during the early stages of the NFL offseason.