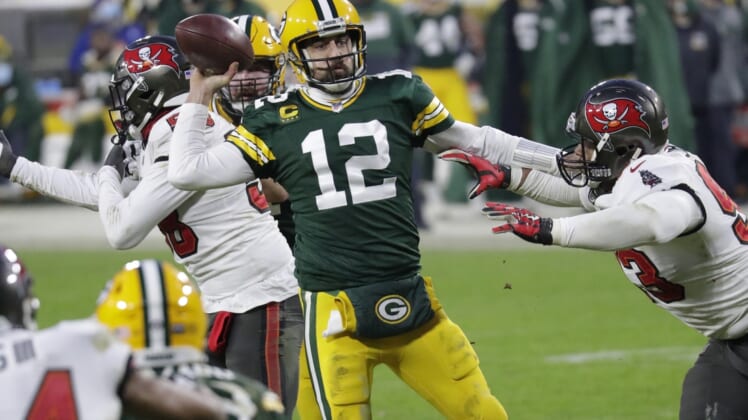 Could Sunday’s NFC Championship Game turn out to be Aaron Rodgers’ final appearance in a Green Bay Packers’ uniform?

It seems like a crazy notion after the superb season the 37-year-old Rodgers turned in. He is the favorite to win NFL Most Valuable Player honors for the third time after passing for 4,299 yards and a franchise-record 48 touchdowns.

But there was Rodgers creating the speculation himself after the 31-26 loss to the Tampa Bay Buccaneers.

“There’s a lot of guys’ futures that are uncertain, myself included,” Rodgers said during his postgame press conference. “That’s what’s sad about it most, getting this far.”

Rodgers fielded another question in which he was asked, “Where do you go from here?” He again sounded unsure of his future with the franchise.

“I don’t know, I really don’t. A lot of unknowns going into this offseason now,” Rodgers said. “I am going to have to take some time away for sure and clear my head and see what is going on with everything, but it is pretty tough right now.”

This marked the second straight season in which the Packers lost in the NFC Championship Game.

After last season’s loss to the San Francisco 49ers, Green Bay selected quarterback Jordan Love of Utah State with the 26th pick of the first round in the 2020 NFL Draft.

Rodgers was highly perturbed at the time but later maneuvered his focus toward displaying he was still one of the top quarterbacks in the NFL.

Packers coach Matt LaFleur was told of Rodgers’ sentiments and made it clear he expected to see the 16-year veteran in a Green Bay uniform again next season.

“I sure as hell hope so,” LaFleur said. “I mean, the guy is the MVP of this league. He’s the heart and soul of our football team. So, hell yeah. He better be back here. He’s our leader.”

Perhaps part of Rodgers’ frustration stemmed with LaFleur’s highly questionable decision to opt to kick a field goal with the Packers trailing by eight and stationed at the Buccaneers’ 8-yard line. Mason Crosby kicked a 26-yard field with 2:05 left and Green Bay never possessed the ball again.

“I didn’t have a decision on that one,” Rodgers said. “It wasn’t my decision, but I understand the thinking.”

The sequence began with the Packers having first-and-goal from the 8-yard line and Rodgers said, “I was thinking we were going to have four chances (of scoring).”

Rodgers has two seasons left on a four-year, $134 million so he won’t be an easy player to move via trade.

Rodgers is a Northern California native — his hometown is Chico — and played college football at Cal. Perhaps he wouldn’t mind finishing his career with the San Francisco 49ers, who might be interested in upgrading the position after Jimmy Garoppolo experienced an injury-ravaged 2020 campaign.

Either way, Rodgers has played in only one Super Bowl with Green Bay and Sunday’s loss dropped him to 1-4 in NFC title games.

He completed 33 of 48 passes for 346 yards, three touchdowns and one interception against the Buccaneers in what was his 218th appearance (counting postseason) for the Packers.

The question now looms: Was it his last?