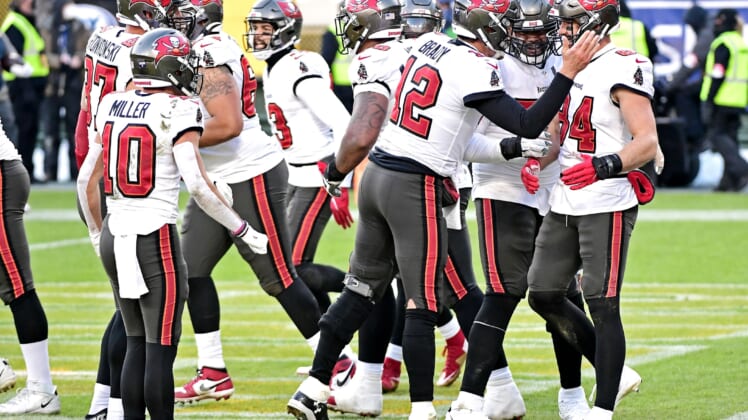 Tom Brady is headed back to the Super Bowl, this time with the Tampa Bay Buccaneers after a wild NFC Championship Game victory over the Green Bay Packers. A matchup between two future Hall of Fame quarterbacks delivered on the hype, coming down to the final minutes in a wild finish.

Brady and Co. started cooking early. Thanks to some big snags by wide receivers Chris Godwin and Mike Evans, paired with a glorious run by Leonard Fournette, the Buccaneers rolled out to a 14-7 victory. Just as Green Bay started to respond, cutting the deficit to four points, Tampa Bay’s defense gave Brady another opportunity to prove why he is the best to ever do it.

Things looked over when the Buccaneers took a 28-10 lead, but Aaron Rodgers wasn’t ready to surrender quite yet. He stormed back with two touchdowns of his own, making it a 28-23 game entering the final quarter.

With a trip to the Super Bowl on the line, Brady uncharacteristically struggled. Two interceptions gave the Packers a chance to grab their first lead of the game, but Tampa Bay’s defense came through again and again in the closing minutes. Finally, with the help of a baffling decision by Matt LaFleur, the white flag was waved and Brady punched his ticket to earn his 10th Super Bowl appearance.

Here are the winners and losers from the Tampa Bay Buccaneers’ 31-26 victory over the GreenBay Packers in the NFC Championship Game.

Tampa Bay isn’t going to Super Bowl LV because of head coach Bruce Arians. It was Brady who made the call to throw the last-second Hail Mary instead of punting before halftime. Then, when Arians’ offense stopped working, Todd Bowles’ defense saved the day.

After each of Brady’s two interceptions, it felt like Tampa Bay’s Super Bowl hopes were sinking fast. Instead, Bowles rallied his defense and dialed up the right blitzes and coverages to take away everything the Packers wanted to do. Green Bay’s offense couldn’t find the end zone in the fourth quarter, often stalling in three-and-outs. While the Packers looked flat with their season on the line, every single player on Tampa Bay’s defense executed, flew to the football and did the little things right. So many players came through in this one and that’s a credit to Bowles.

Kevin King had an opportunity to create his legacy in Green Bay and to write himself a blank check. A pending free agent this offseason, King was going to be challenged by Brady. If he stepped up and made a big play, he would send his team to Super Bowl LV and become a hero for one of the NFL’s most storied franchises.

Instead, King was burned by the Buccaneers and social media. First, Mike Evans torched him for the game-opening touchdown. Then, with everyone in the country expecting a last-second deep shot from Brady, King let Scotty Miller burn past him for a game-changing score. Immediately after, fans and a Packers’ legend called for his benching. The 25-year-old already had durability concerns and questions about his consistency. After this performance, it’s hard to see him cashing in this offseason or returning to Green Bay.

There’s a reason opposing quarterbacks often avoid throwing in Jaire Alexander’s direction. He played at an All-Pro level throughout the regular season, shutting down No. 1 receivers and taking away his side of the field. In the NFC Championship Game, Tom Brady decided to throw it in his direction.

Unsurprisingly, even for the greatest quarterback in NFL history, things didn’t work out. Brady’s throw to Mike Evans was too high, allowing Alexander to snag it in the air, taking away potential points for the Buccaneers. Again, when Green Bay’s offense failed to seize on the opportunity, Alexander made another incredible play to give his team the football back. If NFL fans weren’t aware of who Jaire Alexander was before, they and Tom Brady will appreciate him now.

Matt LaFleur has done a lot of things right as head coach, but a few inexplicable decisions cost the Green Bay Packers a trip to Super Bowl LV. First, retaining defensive coordinator Mike Pettine. After seeing this defense get gashed in the last NFC Championship Game, retaining the same defensive play-caller is asking for history to repeat itself. Of course, two other decisions proved even more costly on Sunday.

For one, after riding an excellent running game to reach this point, LaFleur abandoned it in the second half. Jamaal Williams is a good running back and A.J. Dillon can be a punisher in the fourth quarter. Yet, for whatever reason, Green Bay stopped running the football and it set the passing attack up for failure.

Finally, the moment when Matt LaFleur waved the white flag in the NFC Championship Game. There is no logical reason to kick the field goal in that situation. Trailing by eight points with Brady waiting to get the football back, making it a five-point deficit does nothing. While this defense looked a lot better in the second half, Brady is also the greatest quarterback in NFL history for a reason. Even if your offense forces a stop and gets the football back, it still needs to drive down the field for another touchdown. The moment LaFleur made the decision to trust Mason Crosby over Aaron Rodgers, it was over. Frankly, it was also fitting for an organization that chose to draft Rodgers’ potential successor in 3-4 years, over talent that might have helped him win the NFC championship.

Some players are just born to thrive in the playoffs. It turns out, Brady isn’t the only one on Tampa Bay’s roster who carries the clutch gene. A week after picking off Drew Brees and returning it 36 yards to set up a touchdown, Murphy-Bunting came through once again by picking off another future Hall of Famer.

It proved to be crucial in the NFC Championship Game. If not for the interception, Aaron Rodgers likely moves the offense downfield and sets up a score before halftime. Instead, Brady got the football back and stuck it into the end zone for a score of his own. A single play can make all the difference in the NFL Playoffs, the Saints learned that last Sunday and now Green Bay is dealing with the same pain. Credit to Murphy-Bunting, a 23-year-old playing well beyond his years by making the game-changing plays that helped send this team to Super Bowl LV.

Aaron Jones is one of the best running backs in the NFL. He’s proven it throughout the regular season, delivering incredible performance and highlight plays with regularity. Hoping for a new contract, he went into Sunday with a shot to shine on the biggest stage. He fumbled it away.

It wasn’t even Jones’ first fumble of the day. He coughed the ball up in the first half, but was saved by Robert Tonyan covering it up. He wouldn’t be so fortunate the second time around. Jones’ fumble gifted the Buccaneers a touchdown, something that simply can’t happen in the NFC Championship Game. This could have been the game for Jones to show the Packers why they need to pay him. Instead, he likely sealed his fate with the team.