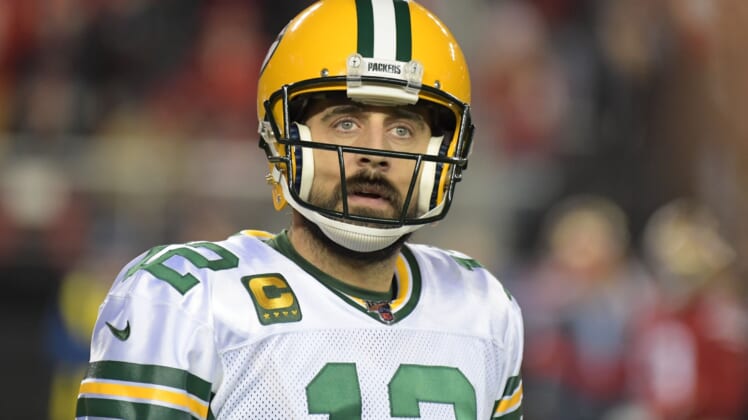 The Green Bay Packers shocked the world in the 2020 NFL Draft by trading up to select Jordan Love. While many assumed the move was to prepare for the future, some around the NFL believe the Packers might have done it to send a message to Aaron Rodgers.

An AFC coach told Bleacher Report’s Mike Freeman that the decision to draft Love and not taking a single receiver might have been a shot across the bow to the organization’s star quarterback. Simply put, the message to Rodgers from general manager Brian Gutekunst might have been a power play to show the NFL star who actually runs the team.

The anonymous AFC coach isn’t the only person in the NFL who views Green Bay’s 2020 draft moves as a shot at its future Hall of Fame quarterback. Multiple team executives and coaches shared similar thinking, hinting that the Packers might have used this draft as a display of power to Rodgers.

There is also speculation around the NFL that head coach Matt LaFleur could already be fed up with his star quarterback. Early in the 2019 season, rumors spread that Rodgers and LaFleur already didn’t have the greatest relationship. If Green Bay wanted to send a message to their 36-year-old quarterback, drafting his successor could have done it.

The decision comes with obvious risks. Green Bay’s Super Bowl odds dropped significantly following the NFL Draft as the team didn’t address its most pressing needs at linebacker and wide receiver. The Packers even admitted that Love is unlikely to contribute for several years, which immediately hurts the value of that first-round pick.

Rodgers will stay with the Packers for the 2020 season due to his cap hit and Love not being ready to start in the NFL. There is already speculation around the NFL that Rodgers could be traded next offseason, which creates a layer of drama for a team that seemingly still wants to contend.