Are the Seahawks too dependent on Russell Wilson heading into 2021 and beyond? 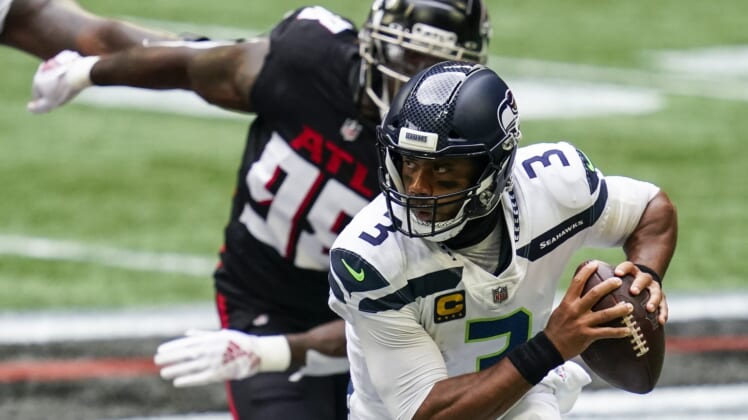 The Seattle Seahawks franchise has been extremely successful during the Russell Wilson era that began in 2012, but is the team too dependent on Wilson’s health and longevity looking ahead to 2021 and beyond?

To date, Seattle has been very fortunate that Wilson has never missed a single start since he was drafted. Knock on wood.

He has played 140 regular games thus far and has made 15 total postseason appearances, including two Super Bowls and one championship in Super Bowl 48.

While no injury to Wilson over his nine seasons in the NFL has ever been bad enough to sideline him, he has still dealt with his fair share of getting banged around each game, thanks largely to a lackluster offensive line.

On a yearly basis, Wilson is hands-down one of the most under-duress quarterbacks in the league. From 2012 to present, he’s been sacked 387 times (2.7 average per career game).

Only Carson Wentz has been dropped more times (50 sacks in 12 games) than Wilson in 2020. Still, year after year, the Seahawks accomplish little to improve Wilson’s offensive line. Ahead of the 2020 regular season, Pro Football Focus ranked the Seahawks offensive line as the 28th-worst in the NFL.

With the obvious stated, Wilson is not Mr. Invincible moving forward. Seattle would be in complete devastation mode if Wilson was to ever miss substantial time, especially if his exposure to getting hit could have been better shielded.

As it stands, embattled quarterback Geno Smith is Wilson’s only backup. Yikes.

Aside from the Seahawks putting most of their eggs in Wilson’s basket each time they hit the gridiron, his efforts often get negated by a defense that needs some major bolstering.

Throughout 2020, the Seahawks have given up the second-most overall yards (407.4) per contest. This would include quarterbacks completing 66% of their passes, while averaging a league-high 309.8 air yards per game.

And in a very mind-bending development, Seattle’s defense couldn’t shut down a Colt McCoy-led New York Giants offense well enough to avoid a 17-12 loss in Week 13. This is a contest that saw the likes of veteran running backs Wayne Gallman and Alfred Morris combine for 164 rushing yards and one touchdown.

Needless to say, this Seahawks D is far-removed from its legendary Legion of Boom days. The only cornerstone players remaining from that era are linebackers K.J. Wright and Bobby Wagner from the 2011 and 2012 draft classes.

Seattle is definitely in a rebuilding phase on defense, and although the team did well to trade for Jamal Adams, he wasn’t cheap. Seattle gave up a big ransom: its 2021 first-round and a third-round pick, along with a first-rounder in 2022.

This leaves little for the Seahawks to leverage for player capital gains in the early rounds of the 2021 NFL Draft. With that said, Seattle cannot even be written into our early 2021 first-round NFL mock draft.

So, what does 2021 hold for the Seahawks as far as available cap space and acquiring players in free agency?

This is a bleak outlook as well for Seattle head coach Pete Carroll and Co., as Carroll may need to do a magician’s coaching job with younger, cheaper players to salvage this situation.

The Seahawks currently have the least amount of available salary cap space — a mere $813,062 — compared to all other teams. Outside of Wilson, Wagner, left tackle Duane Brown, wide receiver Tyler Lockett and Wright eat up the largest amounts of salary cap on the team.

As things currently stand, Seattle can hardly afford to sign any big impending free agents or negotiate any major NFL transactions in 2021 unless some cap space is freed up through a trade of one of its core players.

While Wilson remains the Seahawks’ rock for now, holes remain across the o-line, and the defense need attention. Oh, and the impending free agent situation in 2021 with running back Chris Carson is no picnic for general manager John Schneider, either.

To focus on what’s more directly ahead, the first order of business is for Wilson and the Seahawks to achieve playoff status with four more regular-season games left on the 2020 NFL schedule.

Once this year’s slate is in the books — and depending how deep Wilson can push this team in the postseason — Seattle will have its work cut out to build a better army to help support its franchise quarterback’s longevity for the remainder of his presumptive prime years.