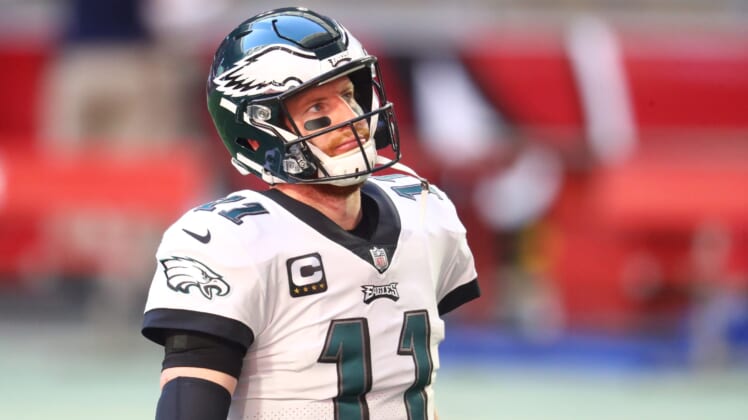 When the relationship between Philadelphia Eagles quarterback Carson Wentz and coach Doug Pederson went south, the team fired its Super Bowl-winning coach. After hiring a new offensive mind to salvage the franchise quarterback’s career, there may still be trouble in Philadelphia.

Wentz, who led the NFL in interceptions and sacks taken, was benched in Week 13 as rookie quarterback Jalen Hurts took over. Following a 3-8-1 start under Wentz, the Eagles went 1-3 with Hurts as the starter. Before Philadelphia’s season end, a flurry of Eagles rumors came out about the fractured relationship between Wentz and Pederson.

Entering Week 17, many expected Pederson to return for the 2021 season. Then, facing the possibility of their highly-paid quarterback demanding a trade, the Eagles shocked the NFL world by firing Pederson. The organization immediately launched a coaching search to find an offensive-minded coach who could salvage Wentz, settling on Nick Sirianni.

If the organization thought that move would smooth things over with Wentz, it appears they were mistaken.

Eagles rumors: Carson Wentz ‘not pleased’ to be in Philadelphia

According to Sports Illustrated’s Albert Breer, Wentz remains unhappy in Philadelphia. The 28-year-old quarterback reportedly “isn’t exactly pleased” with the current situation and seemingly doesn’t want to play for the Eagles.

This isn’t the first report hinting at a tenuous relationship between the Eagles and their franchise signal-caller. Earlier reporting detailed the issues Wentz has with the Eagles’ organization and his hurt feelings go beyond Pederson’s decision to bench him during the 2020 season.

It’s understandable for Wentz to be upset over being benched; any player with a competitive fire would be angry about that happening. With that said, the Eagles didn’t have much of a choice.

Wentz completed just 57.4% of his passes this season, one of the worst marks among starting quarterbacks. Despite playing in 12-of-16 games, he still finished with a league-high 15 interceptions and 50 sacks. Just as alarming, his 49.5 QBR was one of the lowest among his peers.

Plenty of the regression may also fall on his shoulders. He reportedly ignored coaching during the season, didn’t take responsibility for his mistakes and multiple teammates eventually suggested a change at quarterback might be necessary.

Wentz’s issues with the organization, even with Pederson gone, likely can be tied directly to the backup quarterback spot. It was Nick Foles who replaced him after an ACL tear, leading the Eagles to a Lombardi Trophy. That forever earned the love of the fan base and teammates, hurting Wentz’s standing in Philadelphia.

Shortly after Foles left, the Eagles spent a 2020 second-round pick on Hurts. While it was viewed as a developmental pick, not a threat to challenge Wentz, it clearly impacted Wentz’s confidence and everyone in Philadelphia eventually started rooting for the rookie.

Given Sirianni won’t even commit to Wentz as the starter in 2021, it’s tough to see the relationship between this quarterback and franchise improving anytime soon.