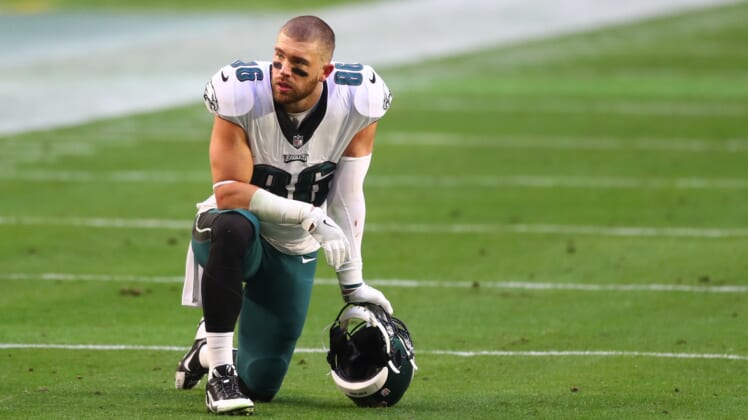 Philadelphia Eagles tight end Zach Ertz has been beloved by the fan base for years. After playing through excruciating pain in recent seasons, Ertz’s days playing with the Eagles are likely over.

In an offseason already full of drama in Philadelphia, centered on quarterback Carson Wentz and the hiring of a new head coach, one of Philadelphia’s most beloved athletes is reportedly done with the organization.

According to Pro Football Network’s Tony Pauline, Zach Ertz reportedly won’t play for the Philadelphia Eagles next season. The star tight end, who dealt with injuries in 2020, isn’t happy with the organization and how he was treated this past year.

Ertz has been willing to put up with a lot in his NFL career. He played through a fractured rib late in the 2019 season and it was later revealed that he also fought through a lacerated kidney. But he remained on the field, with so many of his teammates sidelined, helping Philadelphia clinch a playoff spot in 2019.

After the season, the Eagles picked up his team option and planned to discuss a contract extension with him during the offseason. Negotiations carried into August and then abruptly ended before the regular season began, with the 30-year-old left to play out the remainder of his contract.

Ertz, a three-time Pro Bowl selection, split time with tight end Dallas Goedert from Week 1 on. Both missed time with multi-week injuries, but Philadelphia’s offense clearly became more tailored for Goedert. While both played in 11 games, Goedert drew more receptions (46 to 36), receiving yards (524 to 335) and touchdowns (3 to 1).

The Eagles started taking calls on Ertz before the NFL trade deadline, but a deal never came to fruition. Instead, Ertz spent his age-30 season on a 4-11-1 team.

While the team is in a difficult spot financially, requiring numerous moves to get under the NFL salary cap, Ertz is far more likely to be traded than cut this offseason. Carrying a $12.47 million cap hit, he should generate enough interest from teams seeking another weapon to add on offense.

Moving forward, the Philadelphia Eagles will have to hope Nick Sirianni can fix things. Even with a head coach hired to specifically help him, Carson Wentz remains unhappy in Philadelphia.