Russell Wilson: 5 teams who are a perfect fit for Seattle Seahawks QB 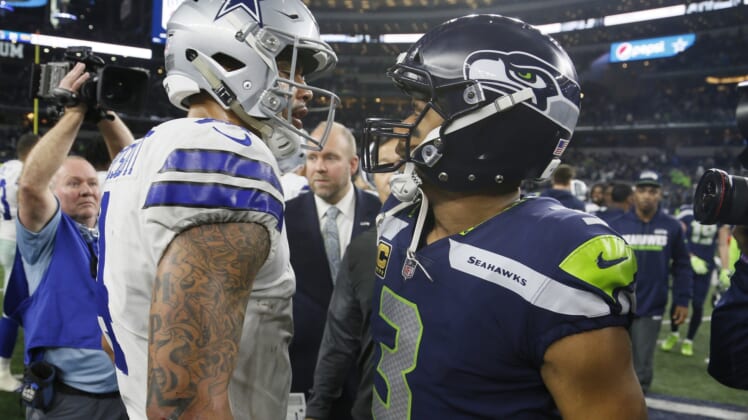 Russell Wilson is seemingly leaning toward finishing his NFL career with a different team. Based on the recent rumors around the Seattle Seahawks superstar, he’s looking to be traded either this offseason or soon thereafter.

Any team that doesn’t have an absolutely elite quarterback should be picking up the phone and hitting up Seahawks general manager John Schneider with a king’s ransom offer to acquire Wilson if he is, in fact, made available.

The latest buzz indicates Wilson has named New Orleans, Las Vegas, Miami, Chicago, Dallas and the New York Jets as desired trade destinations. Instead of exploring all those here, we’ll focus on the best two and throw other sensible teams into the mix.

Here’s a look at the five teams that may not come to mind right away, but are an absolutely perfect fit for Wilson if he moves on from Seattle.

Yes, the Colts just traded for Carson Wentz, but they’d be nuts to not consider upgrading from him to Wilson if they can. Including Wentz as part of the deal would give Seattle a starting quarterback who’s played at an MVP-caliber level before at a discount. He’d also benefit from the Seahawks’ run-first philosophy on offense.

Wentz hasn’t had weapons like Tyler Lockett or DK Metcalf at wide receiver during any point in his NFL career to date, either. The skill position talent in Indianapolis is young and largely unproven, so being able to rely on two go-to targets like the Seahawks’ dynamic receiver duo would help ease Wentz’s apprehension about being traded a second time.

As for Wilson, he’d be going to a team that has an excellent offensive line led by All-Pro guard Quenton Nelson. That’s been a huge shortcoming in Seattle throughout Wilson’s tenure, and it also helps that he’d have an excellent backfield tandem to support him in Jonathan Taylor and Nyheim Hines.

One thing he’s proven with the Seahawks is Wilson can make the most of an unheralded receiving corps. And that’s not to say there’s no talent among the Colts’ group, because between Michael Pittman Jr. and Parris Campbell, there definitely is.

Because the Philadelphia Eagles are eating so much dead money after their decision to trade Wentz in the first place, according to Over the Cap, Indianapolis wouldn’t be on the hook for any money if it ships Wentz to Seattle.

In spite of the inspiring narrative potential of a Wentz resurgence in his reunion with Frank Reich, you can bet Colts general manager Chris Ballard will be all over Wilson if he can get him.

The Jets have done business with the Seahawks pretty recently, swinging a big trade for star safety Jamal Adams that required multiple first-round picks from Seattle.

Is it possible the Seahawks could recoup the cost from the Adams trade and then some if they send Wilson to New York? It’s very much in play.

Since Gang Green is in the AFC, Wilson could be traded out of conference in this scenario, and the Jets have tons of cap space to take on his contract and still build a strong team around him. They also own the No. 2 overall pick in the upcoming draft, so Seattle could have its crack at the second-best QB prospect on the board to serve as Wilson’s successor.

New Jets coach Robert Saleh was the San Francisco 49ers’ defensive coordinator for multiple seasons, so Wilson is very familiar with him and knows how good he is schematically. Saleh also has an extroverted leadership style and seems determined to bring a new spark to the Big Apple.

With a relatively unproven play-caller in Mike LaFleur on New York’s staff, Wilson could have plenty of input in the offense — and could even lure pending Seahawks free agents such as linebacker K.J. Wright and cornerback Shaquill Griffin to join him for a fresh start in a big market.

In terms of a personal brand move and endorsement deals off the field, there are few destinations that would work out better for Wilson when it comes to setting himself up after his playing career is finished. But well above that on the list of priorities is Wilson getting the chance to revitalize Jets football in New York, which would be a crowning achievement in and of itself.

Seattle has the means to retool its roster with a new QB, another first-round pick this year and Day 1 choices from the Jets in the subsequent two drafts. In other words, the Seahawks gain back all the assets they gave up to get Adams while getting someone like BYU’s Zach Wilson or Ohio State’s Justin Fields in the draft.

The Miami Dolphins got cleared as one of Wilson’s reported, preferred trade destinations, but you know what? Another NFL franchise in the Sunshine State may be the better choice, and they can offer perhaps the golden ticket or trump card no other team can.

That’s right. Imagine the new-look Jaguars under head coach Urban Meyer offering up the No. 1 overall pick in the 2021 NFL Draft in exchange for Wilson. Straight-up. Nothing else.

This means Seattle could rid itself of Wilson and acquire potentially the best QB prospect in league history: Clemson’s Trevor Lawrence.

Now, the appeal of Jacksonville building around Lawrence while he’s on his cheap rookie contract is undeniable. That said, as highly touted as Lawrence deservedly is, he’s still an unproven commodity in the pro game. Wilson is an elite quarterback in every way, still in the prime of his career.

Even after taking on whatever is left over on Wilson’s contract in a trade, the Jaguars would have plenty of cash to spend in free agency to build around the superstar field general.

Here’s the big kicker: Darrell Bevell, the offensive coordinator for the majority of Wilson’s career, and Brian Schottenheimer, his most recent play-caller in Seattle, are both on the Jaguars staff.

This would seem to suggest Wilson won’t be at all interested in Jacksonville. However, was the Seahawks’ offensive philosophy more a result of Carroll’s stubbornness and refusal to let Wilson air it out? Did Carroll have Bevell and then Schottenheimer in place because he knew he could push them around and that they’d follow his commands?

It’s at least fair to wonder in light of how fractured the relationship between Wilson and Carroll seems to be of late. Bevell and Schottenheimer would provide Wilson with seamless continuity in scheme and playbook terminology. Schottenheimer did get a lot out of Wilson in the first half of 2020 when he allowed the QB to air it out at an unprecedented rate.

Could Meyer have made these Jaguars staff additions with the low-key intent to bring Wilson in all along?

Wilson to Jacksonville would be about the most mind-boggling sleight of hand the NFL has ever seen — and put the Jaguars on an immediate course to challenge for the AFC South title, provided they spend their treasure chest of cap money wisely.

This was the same offer we came up with for a hypothetical trade pitch Dallas made for Deshaun Watson, but it’s a fair offer.

It’d be valid to wonder why Cooper is a part of this deal, when a one-for-one swap involving Wilson and Prescott may suffice. First of all, the Cowboys already have Michael Gallup and CeeDee Lamb as a capable 1-2 receiver punch. Secondly, trading Cooper would save Dallas $14 million in salary cap.

Oh, and Seahawks wideout Tyler Lockett is entering a contract year in 2021, so instead of paying him, Cooper enters the fold as the future, and Seattle either plays out next season with those two and DK Metcalf, or finds a trade partner for Lockett.

Who’s more of a big-ticket acquisition than Wilson for Cowboys owner Jerry Jones? This could be even bigger than dealing for Watson since Wilson is a Super Bowl champion who could well provide the organizational culture overhaul Dallas has desperately needed for at least a decade, maybe more.

Provided the Cowboys’ offensive line can return healthy after collectively missing big chunks of last season, Wilson should be in much better position to have a longer career with America’s Team. He could also help bring out the best in tailback Ezekiel Elliott, whose talents are significant, but thus far he looks like a misguided contract extension granted by Jones.

Prescott should’ve signed an extension with Dallas by now. If Jones keeps balking at the possibility, don’t be surprised to see Prescott franchise tagged and then traded somewhere — possibly in the effort to land Wilson.

As of Thursday the Broncos released veteran defensive lineman Jurrell Casey, creating even more salary cap space for them to work with. They also have the benefit of a franchise left tackle in Garett Boles already under a long-term contract, and a youthful cast of skill players that’s likely the envy of most of the NFL.

In a push to acquire Wilson, Denver would definitely have to part with one of its young playmakers. Jeudy comes to mind as the leading candidate. He was the best route-runner in the 2020 draft class and landed in the first round as a result. An inconsistent rookie campaign followed, yet he still has the upside to be an All-Pro player.

Again, Lockett could be out the door next offseason in Seattle, particularly if Wilson is no longer there, so it makes sense to bring in a talent like Jeudy on the cheap. That also means the Broncos are essentially offering three first-round picks in their trade package.

Miller would provide the edge-rushing help the Seahawks really need and free them up to be flexible on the front seven. They can also have Lock in a Wilson deal and see what he has, or just use some of these assets to move up from the ninth overall pick in the 2021 draft to land a new QB of the future.

Wilson would still have a second-year deep threat in KJ Hamler, a No. 1 receiver in Courtland Sutton, an explosive tailback in Melvin Gordon and a supremely gifted tight end in Noah Fant at his disposal in Denver if this proposed trade were to go through.

Putting Wilson in the same AFC West division as Patrick Mahomes and Justin Herbert is fun to think about. So is just how good the Broncos could be on offense in 2021 and beyond with Wilson at the controls, which would far better complement the genius defensive mind that Denver head coach Vic Fangio brings to the team.

Denver has a storied history of quarterbacks with John Elway, and more recently, Peyton Manning. Elway and the front office have been searching for a capable, long-term replacement for Manning ever since he retired, and Wilson would provide that in spades.