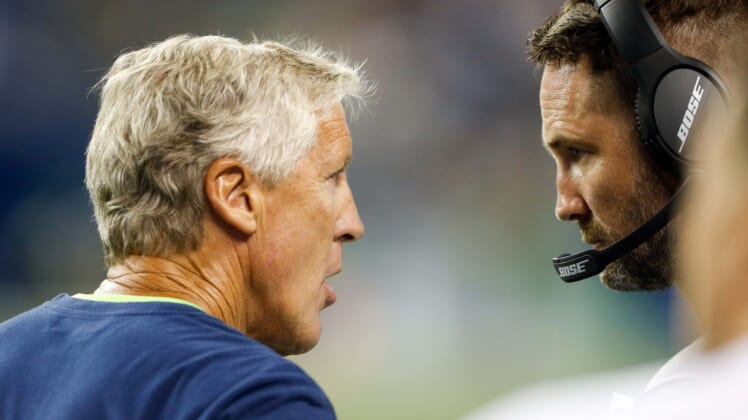 The veteran assistant is coming off his third consecutive season leading a top-10 scoring offense. He has helped the likes of D.K. Metcalf and Tyler Lockett morph into stars in the Pacific Northwest. Russell Wilson remains a perennial NFL MVP candidate.

Despite all of this, Schottenheimer is out of a job. The Seattle Seahawks announced on Tuesday that they have fired the offensive coordinator after three seasons.

Memories of success don’t last too long in the NFL. Just ask recently-fired former Philadelphia Eagles head coach Doug Pederson that. He’s a recent example of short-term memories from the power that be within the league. Schottenheimer is yet another recent example.

The Seahawks claim philosophical differences between head coach Pete Carroll and Schottenheimer. That seems to be a mere excuse. In reality, Seattle’s struggles on the offensive side of the ball over the final half of the regular season played the biggest role in this decision.

It really was a tale of two different years. Just look at what the Seahawks averaged per game through their first eight regular-season outings compared to the latter half.

That’s more than an 11-point difference per game. This also coincided with some second-half struggles from quarterback Russell Wilson. He threw 26 touchdowns against six interceptions over the first eight games while tallying a TD/INT ratio of 14-7 in the second half of the campaign.

In no way does this mean Brian Schottenheimer didn’t deserve to get his walking papers. He certainly did. We’re talking about a skill-position group that’s among the best in the NFL. Metcalf has turned into a star right in front of our eyes. Running back Chris Carson is a consistent performer in the backfield.

Even then, it’s the Seahawks’ offense that let them down during the latter part of the regular season and in their NFC Wildcard game loss to the Los Angeles Rams. Schottenheimer was ultimately going to take the blame for that.

Candidates to become the Seahawks’ next offensive coordinator

Shane Steichen of the Los Angeles Chargers is already being bandied about as a possibility to become Seattle’s next offensive coordinator.

He served in that role on an interim basis under recently-fired head coach Anthony Lynn back in 2019 before taking over on a full-time basis this past season. One might conclude that the 35-year-old Steichen is a primary reason Chargers quarterback Justin Herbert is coming off a record-breaking rookie season in Southern California.

Lynn himself also becomes a potential candidate to replace Schottenheimer with the Seahawks. Prior to taking over the Chargers’ head coach job back in 2017, Lynn served as the Bills’ offensive coordinator the previous year. He led that unit to a top-10 scoring offense en route to Tyrod Taylor earning Pro Bowl honors.

ESPN’s Josina Anderson points to current Chargers quarterbacks coach Pep Hamilton as a possibility, too. In addition to his work with Herbert last season, Hamilton has extensive experience as an offensive coordinator. He served in that role with the Colts (2013-15) and under David Shaw with the Stanford Cardinals from 2011-12.