After three games amid an extraordinarily active Super NFL Wild Card Weekend, let's look at the biggest winners and losers from Saturday. 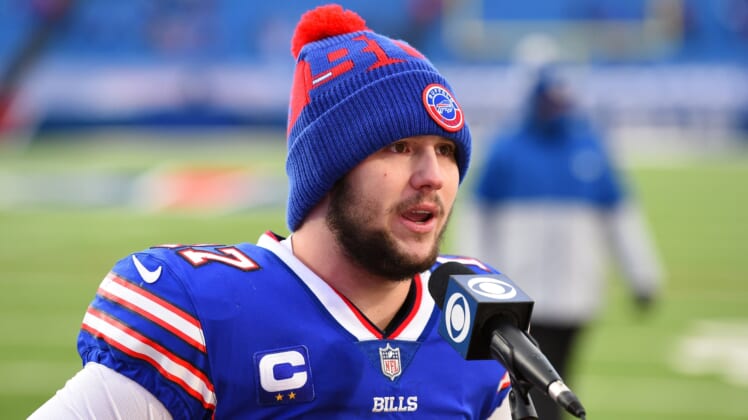 There were three games on Saturday to kick off the 2021 edition of NFL Wild Card Weekend, and of course there had to be some winners and losers to emerge from the kickoff to this year’s postseason.

It’s unfortunate to focus on some negatives, but even in pointing out some of the “losers” from Saturday’s action, we can at least take solace in the fact that there are NFL playoffs to look forward to and highlight some deserving, serious winners.

Check out our list of the biggest winners and losers from each of Saturday’s playoff matchups.

Other than a fourth-quarter fumble that nearly proved disastrous and harked back to his previous two seasons of occasionally anarchic, head-scratching plays, Allen was brilliant on Saturday in the Bills’ 27-24 win.

In addition to rushing for 54 yards and a touchdown on 11 carries, Allen aired it out for 325 yards passing, and found the mark on 26 of 35 attempts.

That 74.3% completion rate underscores the strides Allen has made in Year 3. He’s a legitimate superstar who’s backed up his regular-season excellence with a playoff victory. No less, it came for a franchise that hadn’t had one in 25 years.

Allen is the toast of Buffalo tonight, and deservedly so. He and Stefon Diggs have emerged as arguably the best quarterback-receiver combo in the sport, rivaling Kansas City’s Patrick Mahomes and Tyreek Hill, along with Green Bay’s Aaron Rodgers-Davante Adams tandem.

As a play-caller, Reich didn’t have too bad of a game, but his decision-making was what doomed Indianapolis ultimately. He went for it on fourth down from the Bills’ 4-yard line and failed, then saw Buffalo drive 96 yards in 10 plays right before halftime to seize the momentum.

Reich also botched his use of timeouts in the second half, leaving the Colts without key stoppages they could’ve used to open up the playbook on their final drive, as they moved within yards of field goal range but never got close enough to kick.

The good news? At least Reich knows his bunch can hang with the best, considering the Bills were arguably the NFL’s hottest team entering the postseason. With a huge amount of cap space this offseason, look for the Colts to upgrade at quarterback and bolster the roster elsewhere to make a real AFC title push in 2021.

What a masterpiece Staley put together. If he were to need any cutup of game film for his head coaching interviews, Staley could just point to Los Angeles’ performance against Russell Wilson and the Seattle Seahawks during Super Wild Card Weekend.

Nothing seems to faze the 38-year-old first-time NFL coordinator. He’s like the defensive version of Sean McVay, and should be scooped up as a head coach in short order — if not in 2021, soon.

Staley had to deal with stud defensive lineman Aaron Donald being injured in the third quarter, yet he never wavered. Other than a busted play Wilson turned into a touchdown, there are few holes to poke in the Rams’ collective showing versus their NFC West rival.

With starting quarterback John Wolford going out injured in the first quarter and Jared Goff trying to gut through a broken throwing thumb, the Rams offense needed their No. 1 defense to step up. Staley and his men answered the bell, helping Los Angeles advance to the next round.

Let’s springboard right into this next loser.

It’s amazing that Schottenheimer keeps getting cracks at play-calling gigs, given the extreme lack of success he’s had in his too-lengthy career in such posts. Wilson is a superstar quarterback, with two elite playmakers at receiver in DK Metcalf and Tyler Lockett. Despite these facts, Schottenheimer gets the absolute least out of his weaponry as seems imaginable.

Credit the Rams’ stout defense for their exceptional performance, but let’s not let Schotty off the hook here. Again. The son of Marty runs an antiquated, run-based scheme, and it’s earning him looks as a head coach candidate.

Schottenheimer opened up the playbook to begin this season, when outsiders clamored for the “Let Russ Cook” movement. It worked wonders, at least for a while. When defenses inevitably adjusted, Schottenheimer didn’t know what to do. All that experience, all that talent to work with, and he can’t figure out a way to create big plays within the structure of the offense?

Quite obvious at this point that Schottenheimer should be fired. Seahawks fans were probably screaming at their TVs all afternoon as Wilson ran for his life, the same few run plays were beaten to death, and Schottenheimer did little to put his below-average offensive line in position for success. It really doesn’t have to be this hard for Seattle. Fire Schottenheimer. Witness the improvement.

Doubtful his incredible outing will be overlooked, though with how well the Rams defense played, it’s possible. Akers racked up 131 yards rushing on 28 carries with a touchdown and had two catches for 45 yards.

As Los Angeles weathered quarterback adversity, its defense stepped up, but no less impressive was Akers’ individual effort. The Seahawks D has been exceptional in the second half of the season. Akers blasted right through their front, even when it was obvious Seattle stacked the box to sell out and stop the run.

It’s been a bit of a backfield platoon for the Rams throughout the season. Akers may well be the workhorse the rest of the way, however. The rookie second-round pick is proving to be a revelation, vindicating LA’s decision to part ways with former superstar Todd Gurley, who underwhelmed in Atlanta this year.

Credit McVay for sticking with Akers, and perhaps even knowing his talent and saving his legs for the postseason when he knew the tailback would be needed most. It paid off in a huge way on NFL Wild Card Weekend.

If Washington fans were told before the game that the offense actually would play really well under the guidance of feisty fill-in quarterback Taylor Heinicke, they’d assume their matchup with the Tampa Bay Buccaneers might’ve even resulted in a victory.

Unfortunately, the Football Team’s trademark stout defense, led by a dynamic front four, failed to harass Bucs legendary quarterback Tom Brady as much as was required to win. Brady picked apart Washington’s secondary and handled what pressure he did get with grace and savvy movement in the pocket as he often has.

Brady went to work and put together four stellar scoring drives in the opening half. By then, Heinicke was forced into more obvious passing situations, allowing Tampa Bay defensive coordinator Todd Bowles to dial up the pressure and tee off on the young signal-caller. That didn’t seem to faze the 27-year-old at all, however, as Heinicke ran for an amazing touchdown and threw another in the last quarter to at least keep the game close down the stretch.

If Chase Young and Co. had been able to put Brady on the ground and get more stops early, perhaps the momentum would’ve been different and the Football Team would’ve had a better chance to pull off an upset. Alas, it was not to be, as the Bucs offense simply had too many weapons to account for.

Not to take anything away from the amazing stories of resilience involving Washington coach Ron Rivera and quarterback Alex Smith. TB12 is just firing on all cylinders right now, and the Football Team couldn’t do anything about it.

How about ending things on a high note?

At age 43, Tom Brady looks as good as he has in the past several years. Part of that is attributable to a far superior cast of skill players than he had in New England. Not to discredit the GOAT of QBs, though: He changed the culture in Tampa Bay, providing a huge upgrade over interception machine Jameis Winston and guiding the Bucs to a playoff berth.

This was in spite of working with a new coach in Bruce Arians and a new offense that looked completely different to what Brady ran with the Patriots. No offseason. No real training camp to speak of. No preseason. Plenty of doubters saying Brady was washed up.

Well look at that. Against Washington’s exceptional defense and amid a gutsy performance by his underdog counterpart Heinicke, Brady lit up the scoreboard Saturday evening, netting points on four of the Bucs’ first five drives to build an early lead that proved insurmountable. Brady threw for 381 yards and two touchdowns on the night, and even left some yards on the field because of multiple dropped passes.

Most importantly, Brady and the Bucs offense never wavered despite Washington’s spirited rally and all the pressure on Tampa Bay to not blow it with a one-and-done showing.

If that’s not the epitome of winning, what is?