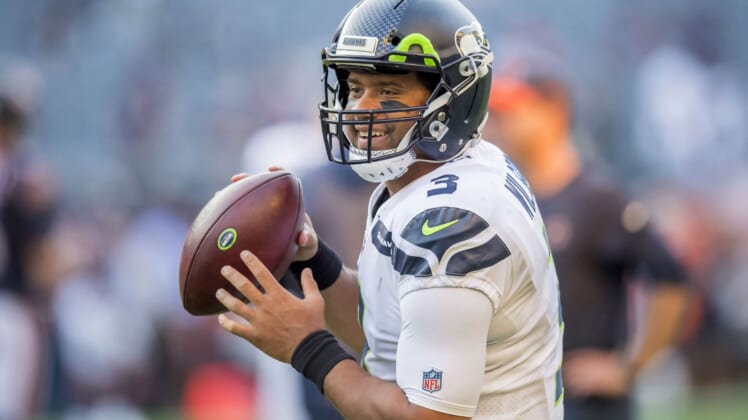 At least one-third of the NFL has called the Seattle Seahawks to figure out what it would take to swing a trade for their superstar quarterback Russell Wilson.

That’s the latest word on the booming market for Wilson’s services, which is sensible considering how great he is and how doomed his relationship with the Seahawks seems to be.

NFL Network’s Ian Rapoport passed along the latest information he’s hearing on the immense interest Wilson is drawing from other teams, indicating more than 10 teams have called:

Even if Seahawks general manager John Schneider is only passively listening at this point, it’s still noteworthy. Despite his agent publicly denying that Wilson requested a trade, he did reportedly provide Seattle with a list of preferred destinations.

Seahawks head coach Pete Carroll has refused to allow Wilson to air the ball out more and isn’t letting the franchise QB have more input on the direction of the offense in general. Seattle also seems allergic to providing Wilson with a competent offensive line, which has led to numerous sacks throughout his nine-year career.

While some sacks are on Wilson due to his unique ability to scramble and improvise, many of them come as a result of poor pass protection.

Whether it’s a change in scheme, upgraded personnel in the trenches or looking at himself and staying within the structure of the offense more often, Wilson has a lot to think about.

The way things seem to be going, it does in fact look like Wilson could be headed out of Seattle given how much interest there is in him — and what a haul of assets he’d return in a prospective deal.

Who seems best suited to trade for Russell Wilson?

Despite the oddsmakers installing the Las Vegas Raiders as favorites to land him and the fact that the team is on Wilson’s list of clubs he’d waive his no-trade contract clause for, it makes barely any sense for him to go there.

Going head-to-head with Patrick Mahomes and Justin Herbert twice a season for the next decade in the AFC West doesn’t sound appealing. The Raiders would have to deal numerous future assets to get Wilson, and they badly need those to rebuild their broken defense and have any hope of even slowing down Mahomes and Herbert.

To stick with the other suitors Wilson’s agent told ESPN insider Adam Schefter he’d given clearance for, that leaves the Chicago Bears, Dallas Cowboys and New Orleans Saints.

Well, the Saints have a disastrous cap situation that could technically be alleviated if they offload some expensive veterans to the Seahawks and get Wilson. It’d take some extraordinary maneuvers by New Orleans’ front office, though, and depending when the trade happens, Seattle would have some work to do from that standpoint, too, depending on the returning compensation.

Chicago has a strong defense, yet general manager Ryan Pace and coach Matt Nagy are both on the hot seat and arguably should’ve been fired after the 2020 season. Disassembling the roster to bring Wilson aboard wouldn’t leave much for him to work with on offense, and the Bears would almost certainly have to part with one of their marquee defensive players.

Could that mean the Dallas Cowboys are the prime option?

If they like Wilson over Dak Prescott as their long-term answer under center, the Cowboys could franchise tag and trade Prescott to the Seahawks and a couple more assets for Wilson. That way, Seattle would have a very viable replacement for Wilson immediately in place and could even get another blue-chip player or at least one premium draft asset in the exchange.