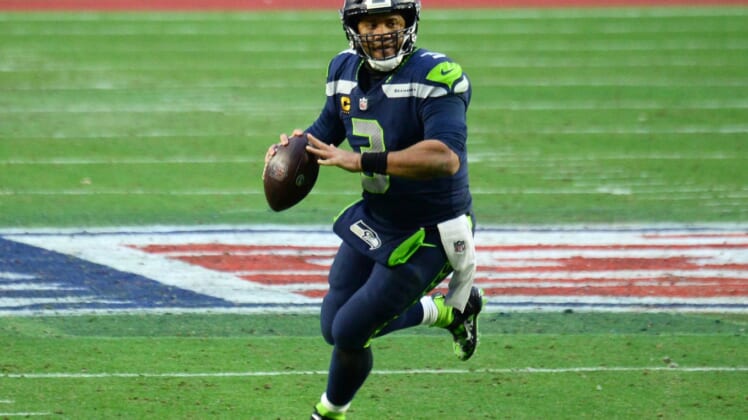 While the quarterback market has been fluid thus far during the NFL offseason, it seems foolish to believe that the Seattle Seahawks will pull off a Russell Wilson trade. They remain legit Super Bowl contenders. Wilson himself is coming off an MVP-caliber season.

Even then, NFL rumors continue to persist that issues exist between the Super Bowl-winning quarterback and his organization. Wilson is not happy about the Seahawks’ inability to protect him with a decent offensive line. In turn, Seattle is reportedly upset with Wilson over making these concerns public.

Could this lead to one of the most-shocking NFL trades in recent memory? It seems unlikely. However, we’re getting some more information on this. To say it is surprising would be an understatement.

NFL Media’s Mike Silver reported on Monday that about one-third of teams around the league have called the Seahawks up about Wilson. He went on to conclude that those teams believe it will take three first-round picks as a baseline to pull off a blockbuster.

There’s a whole heck of a lot to look at here. First off, previous suggestions concluded that the Seahawks did not have Wilson on the trade block. Despite the drama behind the scenes, they were not even in listening mode.

If other teams now believe it will take at least three first-round picks to land Wilson, it’s safe to say that some discussions have taken place. Whether anything comes to fruition on this end remains to be seen.

What we do know is that Wilson wants more input on player personnel decisions and roster-building. At issue here is a less-than-stellar cap situation in the Pacific Northwest.

The Seahawks currently find themselves $14.45 million under the projected 2021 NFL salary cap with core players such as K.J. Wright, Quinton Dunbar, Chris Carson and Shaquill Griffin all set to hit the market next month. Seahawks rumors persist that they are likely going to place the franchise tag on Griffin. Said move would put Seattle over the salary cap.

As for a potential Russell Wilson trade, Seattle would also be taking on a whopping $39 million dead money hit if the team were to move him ahead of June 1. That obviously complicates things further.

As Silver noted, about one-third of the league. However, we can narrow this down a bit. Seattle is unlikely to trade Wilson within the NFC if the team decides to move off the future first ballot Hall of Famer. It certainly isn’t going to trade him to a quarterback-needy team in the NFC West like the San Francisco 49ers.

Rather, a move to the AFC would make sense if this unlikely possibility comes to fruition. The Las Vegas Raiders have been enticed by the possibility of landing Deshaun Watson. Acquiring Wilson to replace Derek Carr would be a similar franchise-altering move.

The New England Patriots are reportedly calling up teams about any quarterback who could be available on the trade market. And while they have mostly been linked to Jimmy Garoppolo, Wilson would make sense for Bill Belichick and Co.

There’s a lot of moving parts here. A Russell Wilson trade remains highly unlikely. With that said, the simple fact that teams now know the baseline asking price in a deal with Seattle leads us to believe that something could be up.

Click below for more Seattle Seahawks news and rumors.