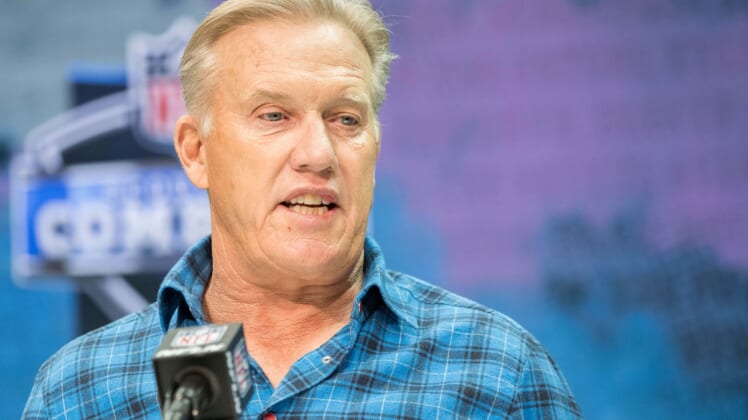 After 10 years calling the shots atop the Denver Broncos’ front office, NFL news is pointing in a different direction for John Elway and his organization.

Denver just finished up shop on a disastrous five-win 2020 NFL season and remains in quarterback purgatory. It’s been a major storyline in the Mile High City since Peyton Manning retired following the 2015 campaign. It could also be one of the primary reasons John Elway and his Broncos announced that the Hall of Famer has opted to step down as general manager.

“John Elway announced Monday that the Broncos will make changes to their football operations, as he will remain president of football operations in 2021 but will hire a general manager with the full authority to oversee the personnel and football departments,” the Broncos announced, via their official website. “The Broncos’ new general manager and Head Coach Vic Fangio will report to Elway as part of the new structure.”

This qualifies as some absolutely huge NFL news one day after the regular season wrapped up. More than anything, the Broncos’ struggles since winning Super Bowl 50 in February of 2016 has had to do with the quarterback position. It’s been about as ugly as any quarterback situation in the NFL.

Broncos quarterback stats the past five years under John Elway

That’s just ugly. It’s also somewhat shocking given that John Elway earned his due on the NFL field as one of the greatest quarterbacks in modern league history. It’s also not a surprise that his Broncos boast a combined 32-48 record during this five-year span.

Related: Broncos should not move on from Drew Lock

NFL news: Who will replace John Elway as the Broncos’ general manager

One name comes to mind above everyone else. Current San Francisco 49ers VP of Player Personnel Adam Peters seems to be the obvious choice to replace Elway.

He was with the Broncos’ front office for eight seasons before joining the 49ers back in 2017. He’s one of the hottest names on the NFL general manager circuit as seven teams look to find new front office heads.

It’s also important to note that the next Broncos’ general manager will have full control over player personnel. That could mean that the team is preparing to move off former second-round pick Drew Lock after just two seasons. Lock, 24, looked pretty good as a rookie last season before regressing in 2020. In fact, he tied with Carson Wentz in the league lead for interceptions with 15.

NFL news: Are the Broncos set to replace Drew Lock?

Obviously, the quarterback situation remains a major news story in Denver right now. Perhaps, Peters looks to trade for Jimmy Garoppolo should he be hired. The Super Bowl quarterback could be done in San Francisco after an injury-plagued 2020 season.

NFL news also suggests that benched Philadelphia Eagles quarterback Carson Wentz is on the verge of requesting a trade. While he fits Elway’s model for a prototypical quarterback, we’re not sure what type of model a yet-to-be-named new Broncos general manager is going to follow.

These Broncos are slated to pick ninth overall in the 2021 NFL Draft. There’s a chance they opt to draft another quarterback after so many failures under John Elway. Of those who could be available with that selection, Trey Lance of North Dakota State could make sense.