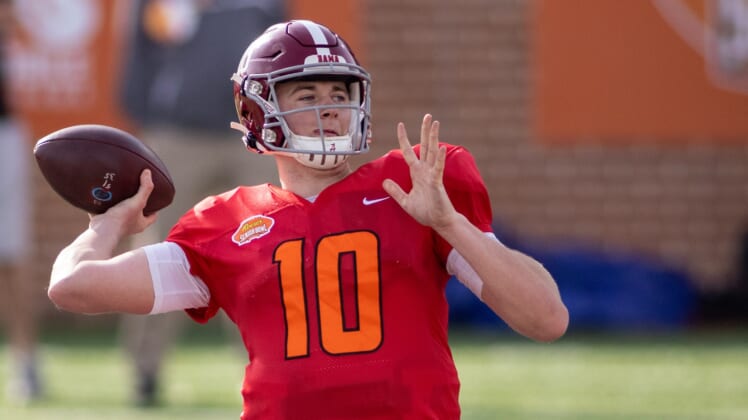 Alabama quarterback Mac Jones is reportedly generating serious interest from the Carolina Panthers with the eighth overall pick in the 2021 NFL Draft, to the point where he won’t fall past them on draft day.

Jones isn’t considered among the premier QB prospects in the 2021 class, but is a borderline first-rounder. However, Carolina apparently views him differently after coaching Jones at the Senior Bowl.

Former NFL executive and current ESPN analyst Mike Tannenbaum shared some interesting information regarding how the Panthers perceive Jones, per Get Up:

Granted, Tannenbaum agrees with the caveat that Carolina is still very much interested in a Deshaun Watson trade, but if the Panthers really do love Jones this much, dealing numerous assets — including potentially All-Pro tailback Christian McCaffrey — seems ridiculous.

Also interesting is the notion that another team, such as the New England Patriots at 15th overall, could move up to acquire Jones even if Carolina lands Watson.

The modern prototype for NFL quarterbacks is increasingly dependent on a signal-caller’s ability to extend plays with his feet. Jones is passable in this area, yet it’s hardly a strength of his game as it is for the other top prospects like Trevor Lawrence, Zach Wilson, Justin Fields and Trey Lance.

Most of Carolina’s offensive line from the 2020 season is hitting free agency, and while the Panthers have done a fine job of clearing cap space of late, they may need a more athletic QB in the near term to extend plays if they can’t assemble a superior pass blocking unit. Last year’s group ranked 18th according to Pro Football Focus.

Teddy Bridgewater sure isn’t the long-term answer under center in Carolina. With the way the team is constructed right now, it seems like Watson is the No. 1 target, and if the Panthers can’t land him, they might be better off with someone like Fields or Lance.

That said, hailing from Steve Sarkisian’s multiple offense that has plenty of pro-style concepts gives Jones an edge in terms of ability to process and go through full-field reads. He may be more pro-ready than anyone aside from Lawrence, who’s possibly the best prospect in draft history.

Jones certainly made a strong impression in guiding Alabama to a national championship this past season. His accuracy to all levels of the field was off the charts, as he completed 77.4% of his passes and averaged 11.2 yards per attempt in amassing 4,500 yards through the air with 41 touchdowns to only four interceptions.

To play devil’s advocate, though: How much of Jones’ success was due to the phenomenal supporting cast around him?

Circumstances were far different around him as an individual player — not to mention how COVID-19 impacted the NFL’s 2020 offseason schedule — but we saw Tua Tagovailoa struggle as a rookie for the Miami Dolphins. He couldn’t elevate the lackluster talent around him.

As Senior Bowl director Jim Nagy highlighted in a brief cutup of film, Jones has at least flashed the ability to hang tough in the pocket and deliver a strike:

Hailing from Alabama is a positive in many ways, yet it’s also cause for a red flag.

Is Jones’ marginal arm strength and how he might handle much more frequent pressure from the opposing defense. Can he go through his progressions quicker amid added duress?

Well, the Panthers and Patriots seems to believe in Jones’ skill set translating well to the pros from the college game. It’s hard to argue with the raw data and numbers he put up.